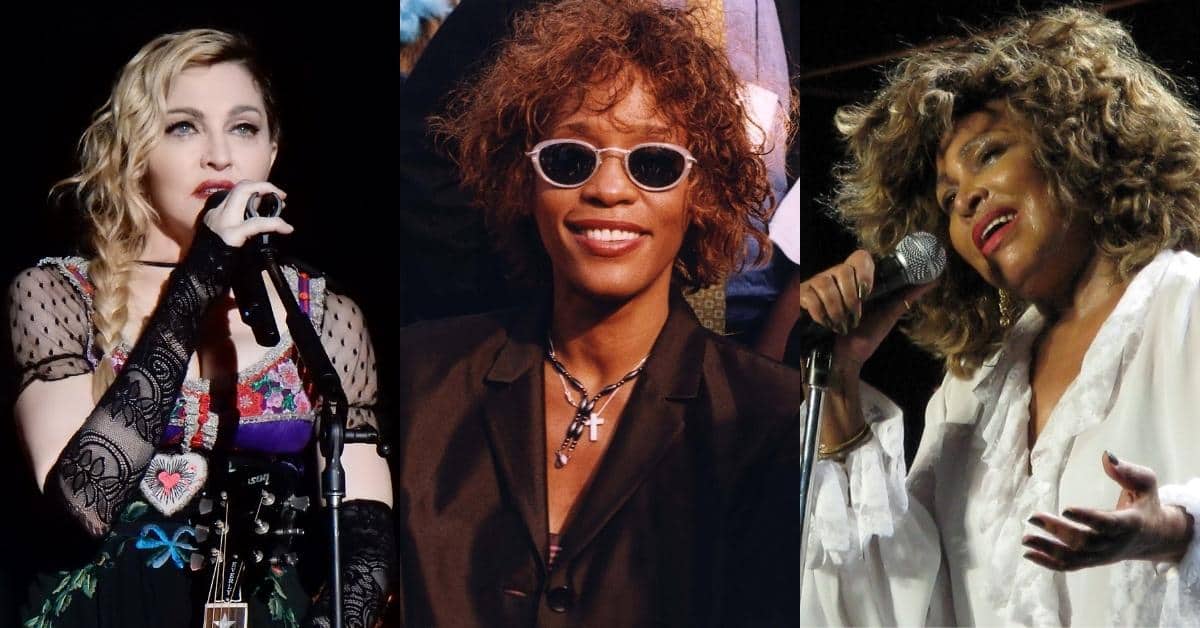 What would music history be if the greatest 80s female singers never got the chance to shine? One word: boring!

Some of the most memorable tunes were created and performed by the ladies of the 80s, and they’ll undoubtedly go down in history as some of the best vocalists and entertainers.

From the beginning, the music industry has always been filled with talented singers, but few compare to these exceptionally gifted females.

After listening to countless skilled female singers, we’ve hand-picked the ones who we think are the greatest female vocalists of the decade.

Here’s our list of the 10 best 80s female singers:

Newton-John started performing in an all-girl group at age fourteen, but her acting and singing abilities propelled her into the spotlight in 1964. She signed with Decca Records in 1966 and released her first single, “Till You Say You’ll Be Mine.”

If you’re a fan of Olivia Newton-John and like to dance, check out our best 80s songs playlist, which includes her hit song, “Physical.”

Some of her most famous songs include “If You Love Me (Let Me Know),” “Have You Ever Been Mellow,” “You’re The One That I Want,” and “Summer Nights” from the Grease soundtrack.

Dianne Elizabeth Reeves is an American jazz artist widely known as one of the best female jazz singers of the 80s because of her incredible scatting ability and passionate vocals.

She moved to Los Angeles and started recording music with artists like Lenny White and Benny Childs. In 1987, she signed to Blue Note Records and released her debut self-titled album.

Some of her most popular tunes include “Better Days,” “Misty,” “Straighten Up And Fly Right,” and “Just My Imagination (Running Away With Me).”

In addition to her successful music career, Reeves also appeared in a variety of films, including Good Night and Good Luck (2005), Dianne Reeves: Live in Montreal (2005), and Dianne Reeves: The Early Years (2008).

Regarded as one of the best female metal singers of all time, German-born songstress Doro Pesch became a global metal icon in the 1980s, serving as the frontwoman of the heavy metal band Warlock.

She started singing when she was ten and performed in various bands as a teenager. Pesch received her big break when she formed Warlock in 1982 and scored a record deal with Mausoleum Records.

During her time with Warlock, she was able to tour with popular metal bands like Megadeth, Scorpions, and Dio.

Eventually, Pesch began to pursue a career as a solo artist and started releasing her music, which quickly gained worldwide attention. “I’m In Love With You,” “All We Are,” and “Breaking The Law” are just a few of the metal singer’s many hits.

During her career, this trend-setting female music artist has released seventeen popular albums that have soared to #1 on multiple European charts. She also earned a German Echo Award for Best National Female Artist in 1994.

Yvette Maria Stevens (a.k.a. Chaka Khan) rose to fame in the 1970s and has enjoyed a successful music career for over five decades, earning her title as the “Queen of Funk.”

In 1972, Khan joined the funk band Rufus and signed with ABC Records. The group gained popularity after Stevie Wonder wrote the song “Tell Me Something Good” for Khan to sing.

Khan eventually scored a record deal with Warner Bros. Records, one of the biggest record labels in the world, which helped her release her debut solo album in 1978. This led to her releasing hit singles like “I’m Every Woman,” “Stuff Like That,” and “Papillon.”

She’s also collaborated with a variety of world-renowned artists, including Ray Charles (who appears on our best songs about loneliness playlist with his song “Lonely Avenue”), Mary J. Blige, and Robert Palmer.

In addition, Khan was the first-ever R&B artist to have a crossover hit with a rapper (“I Feel For You” featuring Melle Mel), which sold over one million copies in the U.S. and the UK.

Catherine Bush is an esteemed English singer-songwriter, producer, dancer, and pianist who took the UK by storm in the 80s with her eclectic music style and unconventional lyrics.

At eleven, Bush started writing songs, and at nineteen, she signed with EMI Records. In 1978, she released her debut album, The Kick Inside, selling over a million copies in the UK.

Some of Bush’s best-known tunes are “Babooshka,” “Running Up That Hill,” “King Of The Mountain,” and “The Man With The Child In His Eyes.”

Bush became the first female artist to have written every song on a debut album that sold over one million copies. She was also the first solo British female vocalist to make it to #1 on the UK Albums chart.

This accomplished artist has won two Ivor Novello Awards, one Edison Award, one Brit Award, one NME Award, and one BMI London Award, among countless others.

Dolly Rebecca Parton is one of the best female country singers of all time, with over 100 million records sold, easily earning her place among the best female singers of the 80s. Her charming personality and unique singing voice have made her a worldwide sensation.

At six years old, Parton began singing in church, earning her a performance spot on local radio and TV shows. Then, at ten, she started recording songs with Goldband Records and performed for the first time at Nashville’s historic venue, the Grand Ole Opry.

However, she’s best known for being the lead singer in one of the world’s most successful girl groups, The Supremes.

When she was fifteen, Ross joined a vocal group called the Primettes. The group won a talent competition in 1960 and received the opportunity to audition for Motown Records.

The Supremes earned twelve #1 Billboard Hot 100 singles with songs like “Baby Love” and “Come See About Me” and are still the best-charting female group in music history.

In 1970, Ross released her self-titled debut solo album and began her acting career, starring in the 1972 film Lady Sings the Blues, a biography of Billie Holiday.

A few of the singer’s most popular tracks include “Love Hangover,” “Touch Me In The Morning,” “Upside Down,” and “Endless Love.”

Ross has collected quite a list of achievements throughout her professional solo career and her time with The Supremes, and her songs have sold over 100 million units worldwide.

Some of her most significant accomplishments include seven American Music Awards, one Grammy Lifetime Achievement Award, one TV Land Award, and one Golden Globe Award, to name a few.

Madonna Louise Ciccone, also known as the “Queen of Pop,” made a name for herself as one of the greatest female singers of the 80s with her incredible musical versatility, artistic expression, and controversial songs.

In her early days, the 80s singer played drums and guitar and sang in various rock bands, including The Breakfast Club.

However, in 1980, she left to pursue a solo career and signed with Gotham Records and a subsidiary of Warner Bros. Records, Sire Records.

In addition, the singer is the world’s best-selling female recording artist of all time, according to the Guinness Book of World Records. She also has more top ten singles on the Billboard Hot 100 than any other female artist.

Tina Turner was born Anna Mae Bullock and is one of the best female rock singers of all time, dominating one of the most popular music genres with her captivating energetic performances and raspy vocals.

After several years of performing with her former husband, Ike Turner, Tina embarked on her own to see if she could be successful as a solo artist.

In 1983, she signed with Capitol Records, which led to successful hits like “Private Dancer,” “Better Be Good To Me,” and “What’s Love Got To Do With It.”

Turner has sold over 100 million records, making her one of the highest-selling artists in music history.

The legendary singer was also inducted into the Rock & Roll Hall of Fame in 1991 and has had three songs inducted into the Grammy Hall of Fame, including “River Deep – Mountain High” (1999), “Proud Mary” (2003), and “What’s Love Got To Do With It” (2012). She also received a prestigious star on the Hollywood Walk of Fame.

Whitney Elizabeth Houston is one of the best black female singers of all time and is commonly referred to as “The Voice.”

She ranks as one of the best-selling musicians of all time, thanks to her powerhouse vocals and impeccable vocal improvisation skills.

Houston’s mother taught her how to sing at a young age, and the two began performing together in clubs during Houston’s teenage years.

Arista Records took notice of the talented young vocalist and signed her immediately after discovering her.

Among her most famous hits include “Where Do Broken Hearts Go,” “I Have Nothing,” and “I Wanna Dance With Somebody (Who Loves Me).”

Throughout her successful solo career, Houston earned six Grammys, sixteen Billboard Music Awards, and two Emmy Awards and was inducted into the Grammy Hall of Fame and Rock & Roll Hall of Fame.

Houston also served as a model and actress, becoming the first black woman on the cover of Seventeen magazine and appearing in films like The Bodyguard (1992) and The Preacher’s Wife (1996).

Hopefully, you’ve gotten to know these spectacular 80s female singers better and are ready to listen to some of their famous tunes.

Each of these gifted female vocalists brings something different to the table, from the smooth, soulful songs of Dianne Reeves to the raspy rock vocals of Tina Turner.

With that said, all in all, these 80s singers deserve to be on your playlist!

Who’s your favorite 80s female singer? Leave a comment below.

The 25 Hottest Female Singers In The World

The 25 Best Singers Of All Time