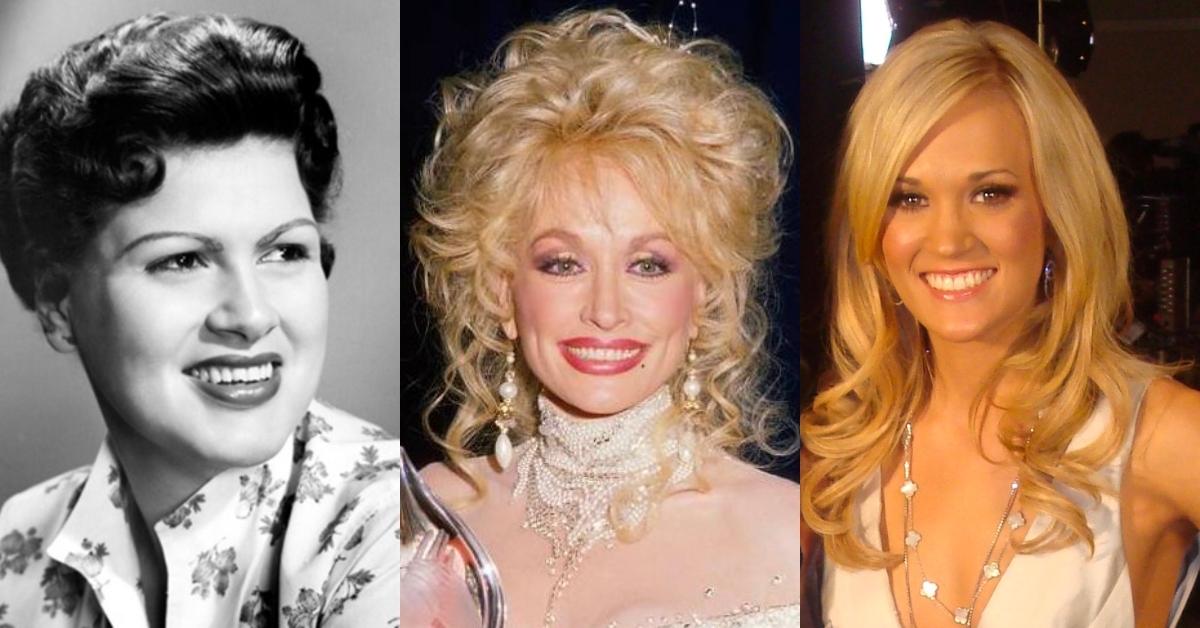 The best female country singers of all time didn’t get much of the limelight for some time, but thankfully, now they’ve stepped into the spotlight in all their glory.

Country music has evolved dramatically over the years, and women have certainly played a significant role in changing it.

From sweet and slow ballads to loud and proud girl-power anthems, these accomplished ladies are sure to impress!

The 10 Best Female Country Singers Of All Time

We’ve listened to various talented women in the country scene and hand-picked who we think are the most iconic artists ever.

Here’s our list of the 10 best female country singers of all time:

Audrey Faith McGraw (known by her stage name, Faith Hill) was born on September 21, 1967, in Ridgeland, Mississippi. Today, she is married to the country artist Tim McGraw.

She started performing at age seven and became a regular performer at local churches during her teenage years. When she was 19, she dropped out of college to move to Nashville and pursue her music career, where she eventually landed a recording contract with Warner Bros. Records.

Some of her signature songs include “Wild One,” “This Kiss,” and “Take Me As I Am.”

If you’re looking for more music from Faith Hill, check out our best summer songs playlist, which features one of her signature tunes, “Breathe.”

Faith is also starring in the Paramount+ series, 1883, alongside her husband, Tim McGraw.

Eilleen Regina Edwards (also known as Shania Twain) is a top female country singer of the 90s and the best-selling female artist in country music history, selling over 100 million records.

She began singing and songwriting at a young age and eventually signed with Mercury Nashville Records during the early 90s. Surprisingly, her debut album was not successful, but her second album released in 1995, The Woman in Me, made her a household name.

Among her most famous hits are “You’re Still The One,” “That Don’t Impress Me Much,” “Any Man of Mine,” and “I’m Gonna Getcha Good!”

You’ll also find Shania Twain on our best 90s songs playlist with her mega-hit, “Man! I Feel Like A Woman.”

Throughout her career, Twain has won five Grammy awards, twenty-seven BMI Songwriter awards, one World Music Award, and a spot in the Canadian Music Hall of Fame.

She won local singing contests at ten and began recording at 14. In 1985, she signed a deal with Rounder Records and released her debut studio album in 1987.

A few of her most famous songs include “When You Say Nothing At All” (a cover of Keith Whitley’s original), “Baby Now That I’ve Found You,” “The Lucky One,” and “Whiskey Lullaby” (a duet with country music artist, Brad Paisley).

Krauss has earned 27 Grammies and ranks fourth on the list of most Grammy Awards earned by an artist.

Around age nine, she started singing with her father in a band called “The Schiffters” and eventually joined another band. While looking for rehearsal space, she met her husband, studio engineer John McBride.

After moving to Nashville, McBride earned a spot opening for country music star Garth Brooks. Then, in 1991, she signed a recording contract with RCA Nashville Records.

Her most popular songs include “Concrete Angel,” “My Baby Loves Me,” “A Broken Wing,” and “I Love You.”

McBride has also been nominated for fourteen Grammies and has sold over 14 million albums in the U.S.

For the last three decades, she’s been performing shows worldwide alongside other famous country bands, like The Judds, Blake Shelton, and Lauren Alaina.

Loretta Webb (stage name Loretta Lynn) is one of the greatest female country singers ever and was born in Butcher Hollow, Kentucky, on April 14, 1932.

After getting married at 15, Loretta began songwriting and learning to play guitar. She started her band and began performing and recording, eventually entering the country music scene in Nashville, TN, in the early 50s.

After her first song was released, she signed with Zero Records but later went on to sign with Decca Records, MCA, and Columbia Records, one of the world’s biggest record labels.

Her most famous country hits include “You Ain’t Woman Enough (To Take My Man),” “Coal Miner’s Daughter,” and “Don’t Come Home A-Drinkin’ (With Lovin’ On Your Mind).”

Loretta Lynn is the most awarded female artist in the country genre, scoring twenty-four #1 hit singles and eleven #1 albums.

Loretta is still writing and releasing more of her incredible music today.

LeAnn Rimes’ real name is Margaret LeAnn Rimes Cibrian, and she was born in Jackson, Mississippi, on August 28, 1982.

Rimes developed a following during her early years while performing in musical theater and local music competitions. She quickly rose to fame at 13 after releasing two studio albums and attracting the attention of Curb Records.

Her unique vocals have earned her more than 40 internationally charting singles, and she has sold over 37 million records worldwide.

Among her most iconic hits are “Blue,” “Can’t Fight The Moonlight,” “How Do I Live,” and “The Right Kind Of Wrong.”

Linda Maria Ronstadt took the world by storm as one of the top female country singers with her incredible voice and experimentation with diverse genres.

This country music star was born in Tucson, Arizona, on July 15, 1946. At 14, she, her brother, and her sister formed a folk trio and played shows at local venues.

When she turned 18, Ronstadt moved to L.A. and joined another band (The Stone Poneys), who then signed to Capitol Records in 1966. Then, she began pursuing a solo career, releasing her debut album, Hand Sown…Home Grown, in 1969.

Ronstadt also happens to be the only female country artist to make it onto our best female singers of all time list.

Ronstadt was also inducted into the Rock and Roll Hall of Fame in 2014 and received the 2019 Kennedy Center Honors. Today, she’s retired, but fans everywhere are still jamming to her music!

Carrie Marie Underwood was born on March 10, 1983, in Muskogee, Oklahoma, and was the only solo country singer to have a #1 hit on the Billboard Hot 100 during the 2000s.

The singer is best known for her incredible vocal range and ability to hold notes for an extended period.

Underwood sang at her local church talent shows and town events as a child. In 2005, she embarked on a successful journey as a solo artist after winning the fourth season of American Idol.

Her debut single, “Inside Your Heaven,” soared to #1 on the Billboard Hot 100, breaking chart history. Among her most famous songs are “Jesus Take The Wheel,” “Before He Cheats,” “Cowboy Cassanova,” and “See You Again.”

Carrie Underwood is the most awarded county artist, earning spots in the Oklahoma Music Hall of Fame in 2009 and the Hollywood Walk of Fame in 2018.

Virginia Patterson Hensley (known as the legendary Patsy Cline) was born on September 8, 1932, and is widely considered one of the most influential female country artists of the 20th century.

At 13, Cline experienced a severe throat infection and developed rheumatic fever, putting her in the hospital. However, when she recovered, her voice became even more powerful.

She started performing with her mother in her church choir, and at 14, she began singing on a local radio station (WINC) and appearing in talent competitions and nightclubs. Then, in 1954, she signed a record deal with Four Star Records and started releasing music.

Cline’s most iconic hits include “Leavin’ On Your Mind,” “Walkin’ After Midnight,” “I Fall To Pieces,” and “Crazy.”

Cline received a star on the Hollywood Walk of Fame and a Grammy Lifetime Achievement award. Her 12 Greatest Hits album is also included in the Guinness Book of World Records for most weeks spent on a U.S. chart.

Unfortunately, Patsy Cline passed away in a tragic plane crash on March 5, 1963, but her emotional voice and beautiful songs continue to live on.

Dolly Rebecca Parton is widely regarded as the best female country singer of all time, selling over 100 million records worldwide. She was born on January 19, 1946, in Pittman Center, Tennessee.

By age 10, Parton was already recording her songs through Goldband Records and made her debut appearance at the Grand Ole Opry, where she met Johnny Cash, one of the best country singers with a deep voice.

She initially succeeded as a songwriter, mostly writing with her duet and writing partner, Porter Wagoner, but then switched her focus to a solo career.

You’ll probably recognize a few of her most famous tracks, including “9 to 5,” “I Will Always Love You,” and “Coat of Many Colors.” Dolly’s signature song from 1973, “Jolene,” also appears on our best songs of all time playlist.

Throughout her impressive musical journey, Dolly Parton has composed over 3,000 songs, charted 110 singles, and has 44 top 10 country albums. She’s also been inducted into the Country Music Hall of Fame and the Rock and Roll Hall of Fame.

In addition, Parton is also one of the only artists to receive at least one nomination from the Academy Awards, Grammy Awards, Tony Awards, and Emmy Awards.

Parton has also worked with Sony Pictures on a film adaptation of her first novel, Run, Rose, Run, in which she played the starring role.

We hope this list has piqued your interest and encourages you to give these gifted ladies a listen. They definitely deserve all the applause!

In your opinion, who’s the best female country singer of all time? Leave a comment below.

The 10 Best Black Female Singers of All Time