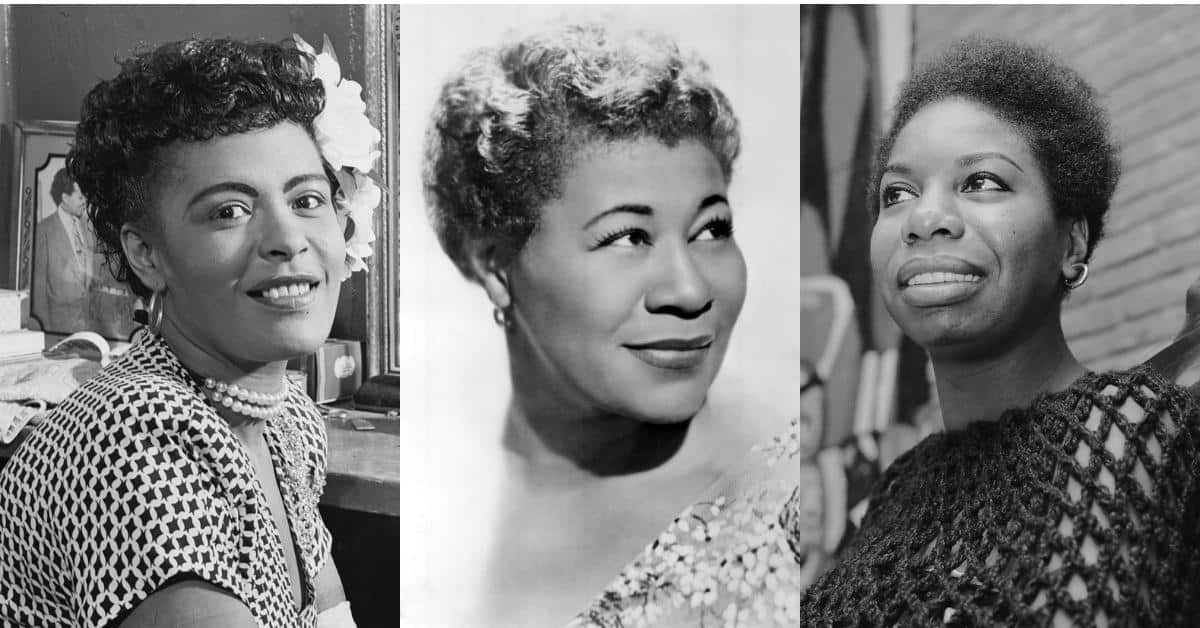 Although the music industry has historically been male-dominated, female jazz singers have made a name for themselves.

The women featured below have risen to fame with their versatile vocals and unique personalities and have many impressive accomplishments.

From their ability to convey deep emotions through song and dazzling techniques, these ten talented ladies are sure to impress!

The 10 Best Female Jazz Singers of All Time

After listening to many skilled vocalists, we’ve picked the ones who, in our opinion, rank among the most outstanding female artists in jazz.

Here’s our list of the 10 best female jazz singers of all time:

Norma Deloris Egstrom (a.k.a Peggy Lee) was an American singer, songwriter, composer, and actress known for her elegance, charm, and quietly captivating voice. Some even referred to her as “the female Frank Sinatra.”

She started singing in a college dance band at a young age and first sang as a professional on KOVC radio in 1936.

After moving to Hollywood at seventeen, Lee eventually joined the Benny Goodman Orchestra and worked with Capitol Records.

If you’re a Peggy Lee fan, check out our best songs about sleep playlist, which features The Pretenders’ version of her song, “I Go To Sleep.”

A few of her other hits include “Somebody Else Is Taking My Place,” “Why Don’t You Do Right?” and “It’s a Good Day.”

Lee recorded over 1,100 songs and composed over 270 throughout her career, which spanned seven decades.

The esteemed vocalist was nominated for thirteen Grammy Awards and won a Grammy for her song “Is That All There Is” in 1969.

Betty Carter, whose birth name was Lillie Mae Jones, was an American jazz singer recognized for her improvisational technique, scatting, and vocal talent.

At fifteen, she studied piano at Detroit Conservatory, and at sixteen, she started sneaking out at night to sing at shows (as her parents weren’t supportive of her musical pursuit).

After winning a singing competition, she signed with a talent agent and received the opportunity to share the stage with Dizzy Gillespie.

In 1948, she joined Lionel Hampton’s band and eventually obtained a recording deal with Epic and Peacock Records.

Some of Carter’s most famous tracks include “Baby It’s Cold Outside” featuring Ray Charles, “Beware My Heart,” and “But Beautiful.

In 1997, Carter received the National Medal of Arts and won a Grammy Award for her album, Look What I Got! in 1988.

The singer is also responsible for discovering other talented jazz artists, including Dave Holland, John Hicks, and Benny Green.

Another one of the most famous female jazz singers is Carmen Mercedes McRae, best known for her behind-the-beat phrasing and unique interpretation of lyrics.

McRae started playing classical piano at eight, and by seventeen, she had already met Billie Holiday.

During her late teens and early twenties, McRae began performing in Benny Carter’s big band and earned a recording contract with Decca Records.

Among her most recognizable songs are “Poor Butterfly,” “Dedicated to You,” “Send in the Clowns,” and “Dear Ruby.”

Throughout her successful career, McRae won an NAACP Image Award and an NEA Jazz Masters Award from the National Endowment for the Arts.

She was also nominated for seven Grammy Awards and appeared in several films, such as The Square Jungle (1955) and The Subterraneans (1960).

Bessie Smith (nicknamed the “Empress of the Blues”) was among the most famous female blues singers of the 20s and 30s. Many recognized her as a voice for minority groups like women and the working class.

After losing both parents young, Smith was forced to busk on the streets of Chattanooga, Tennessee, with her siblings.

In 1912, Smith’s brother, Clarence, helped her snag a spot as a dancer in his traveling band, the Stokes.

In 1913, Smith started performing as a solo act and obtained a recording contract with Columbia Records, which led to collaborations with accomplished artists like Charlie Green, Coleman Hawkins, Louis Armstrong, and Fletcher Henderson.

A few of her greatest tracks include “Downhearted Blues, “Gulf Coast Blues,” and “St. Louis Blues.”

She also received a Grammy Lifetime Achievement Award, had her song “Downhearted Blues” included in the National Recording Registry, and had three songs inducted into the Grammy Hall of Fame.

Dinah Washington, born Ruth Lee Jones, was one of the most popular black female jazz singers of the 40s and 50s. Although she mainly sang jazz music, she also ventured into the blues, R&B, and pop genres.

As a child, she played piano and sang gospel music in her church. Then, at age fifteen, she started playing at the jazz club, Three Deuces, the same club where Billie Holiday performed regularly.

Washington eventually signed with record labels, Keynote, Apollo, and Mercury and began releasing some of her greatest songs, like “Salty Papa Blues,” “Harlem Hit Parade,” and “Am I Asking Too Much.”

She also earned a Grammy Award for Best Rhythm & Blues Performance in 1959 for her song, “What a Difference A Day Makes.”

Jamesetta Hawkins is the birthname of one of the best black female singers of all time, Etta James. This California-born legend rose to fame in the 80s with her gutsy vocals, captivating stage presence, and bluesy rock style.

Throughout the 40s, 50s, and 60s, James played in Nashville R&B clubs and eventually formed the girl group the Creolettes. At fourteen, she met Johnny Otis, who helped sign the group (who had changed their name to Peaches) to Modern Records.

After leaving the Peaches, James pursued a solo career and signed with Chess Records, which led to some of her greatest tunes, including “All I Could Do Was Cry,” “I’d Rather Go Blind,” “At Last,” “Tell Mama,” and “A Sunday Kind of Love.”

The singer collaborated with various other artists, from B.B. King and Chuck Berry to Harvey Fuqua and Gladys Knight.

Sarah Louis Vaughan was an American jazz singer often referred to as one of the greatest voices of the 20th century. She’s recognized for her emotional performances, captivating scat technique, and impressive three-octave vocal range.

She started taking piano lessons at age seven and sang in her church choir. She began performing in Newark, New Jersey’s nightclubs, in her teenage years. At eighteen, Vaughan competed in the Apollo Theater Amateur Night contest and won first place.

After winning the talent competition, Vaughan began touring with Earl Hines and Billy Eckstine. In 1944, she left the band to become a solo artist and eventually signed to Musicraft Records.

A few of her most recognizable songs include “If You Could See Me Now,” “I’ve Got a Crush On You,” “Body and Soul,” and “It’s Magic.”

The jazz vocalist earned four Grammy Awards, an NEA Jazz Masters Award, the George and Ira Gershwin Award for Lifetime Musical Achievement, and was inducted into the Grammy Hall of Fame in 1973 and the American Jazz Hall of Fame in 1988. She also received a star on the Hollywood Walk of Fame.

Eunice Kathleen Waymon (known as Nina Simone) is an American singer-songwriter, pianist, and civil rights activist who is widely regarded as one of the most iconic female jazz singers.

She’s best known for experimenting with other genres, including gospel, pop, and classical music.

If you’re already a Nina Simone fan, check out our best songs about freedom playlist, which features her hit, “I Wish I Knew How It Would Feel To Be Free.”

She started performing at a nightclub in Atlantic City, New Jersey, after changing her stage name to Nina Simone to avoid being caught singing by her disapproving family.

In 1959, she signed with Bethlehem Records and released her debut album, Little Girl Blue, leading to a recording contract with Colpix Records and Philips Records.

Some of her crowd favorites include “Mississippi Goddam,” “Brown Baby,” and “My Baby Just Cares for Me.”

Simone was inducted into the Rock & Roll Hall of Fame in 2018 and the National Rhythm & Blues Hall in 2021.

She also received the Grammy Hall of Fame Award in 2000 for “I Loves You Porgy,” and her song, “Mississippi Goddam,” was selected to be preserved in the National Recording Registry in 2019.

Eleanora Fagan (a.k.a. Billie Holiday) is one of the most famous female jazz singers in music history, recognized for her impeccable improvisational skills, vocal delivery, and innovative approach to phrasing and tempo.

This discovery led to recording contracts with Brunswick, Decca, and one of the biggest record labels in the world, Columbia Records,

Some of her most notable hits include “Strange Fruit,” “Blue Moon,” “I’ll Be Seeing You,” and countless other swing and jazz songs.

Among her many accolades are four Grammy Awards, an induction into the Grammy Hall of Fame, and the National Rhythm & Blues Hall of Fame.

Several movies have also been made about her life, such as Lady Sings the Blues (1972) and The United States vs. Billie Holiday (2021).

Ella Jane Fitzgerald, otherwise known as the “First Lady of Song,” “Queen of Jazz,” and “Lady Ella,” ranks among the best female singers of all time, best known for her pure tone, exceptional improvisational ability, excellent diction, and scatting ability.

At seventeen, Fitzgerald performed “Judy” and “The Object of My Affection” by Connee Boswell at an Amateur Night at the Apollo Theater in Harlem and ended up winning first place.

This big win led to her joining Chick Webb’s orchestra and performing in various bands throughout the late 30s.

In 1942, she left band life to pursue a solo career, releasing some of her greatest hits like “Oh, Lady Be Good,” “Mack the Knife,” and “Summertime.”

The accomplished jazz singer also had the opportunity to collaborate with other famous artists, including Bill Kenny and the Ink Spots, Louis Armstrong, Count Basie, and Duke Ellington.

Fitzgerald received the Presidential Medal of Freedom, thirteen Grammy Awards, a National Medal of Arts, and the Kennedy Center for the Performing Arts Medal of Honor Award throughout her career.

Now you’ve discovered the best female jazz singers of all time and how they rose to fame.

With her beautiful singing voice and out-of-this-world improvisational skills, it’s easy to see why Ella Fitzgerald is our number one pick.

These incredible ladies have inspired countless other artists with their musical gifts, and their songs are sure to stand the test of time.

Who’s the best female jazz singer of all time, in your opinion? Leave a comment below.