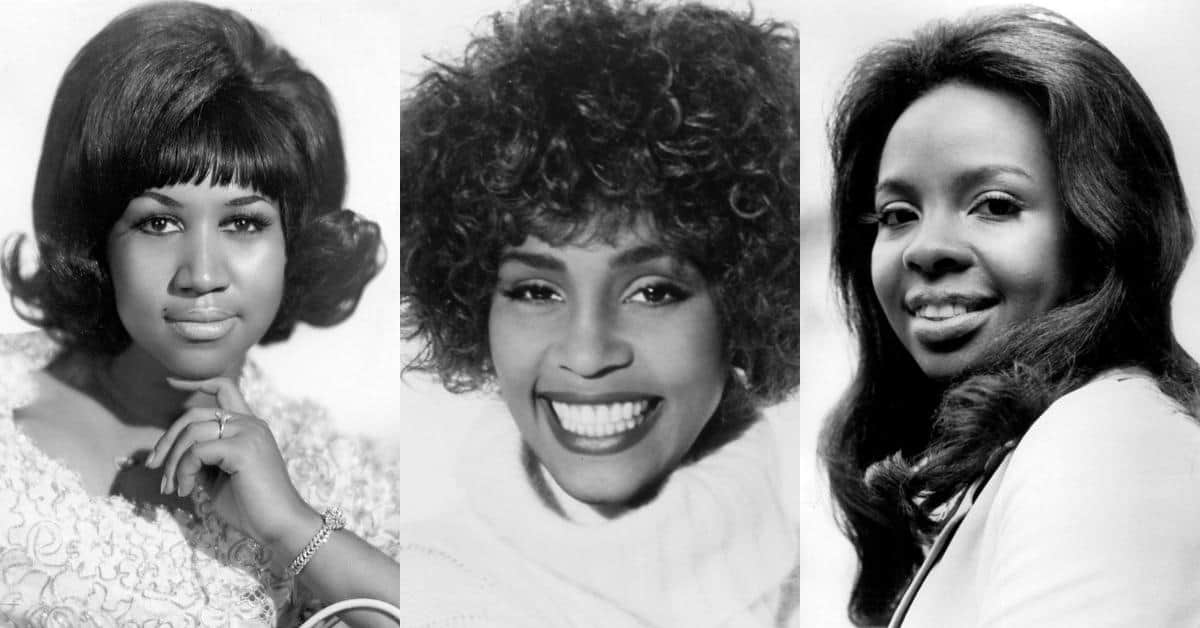 The music industry is full of incredibly talented vocalists, and many of them are black female singers. These powerhouse songbirds have acquired worldwide success and won many prestigious awards.

Whether you’re looking for something slow and soulful or upbeat and groovy, you’re sure to find a favorite song or two from one of the female artists on this list!

The 10 Best Black Female Singers of All Time

Here’s our list of the 10 best black female singers of all time:

Beyoncé Knowles-Carter was born in Houston, Texas, on September 4th, 1981, and is known as one of the most influential black female singers of the 21st century.

You’ll also find Queen B on our best happy songs playlist with her song, “Love On Top.”

She showed off her incredible vocal range by participating in various singing competitions as a child. After becoming the lead singer of the famous girl group Destiny’s Child, she eventually became a household name in the late 90s.

In 2003, Beyoncé embarked on her solo career and released her first album, Dangerously in Love, which included two Billboard Hot 100 #1 singles, “Baby Boy” and “Crazy in Love.”

Throughout the years, she’s released music from some of the most popular music genres, including R&B, pop, hip hop, and soul, which have topped charts worldwide.

Alicia Augello Cook (stage name Alicia Keys) is a professional singer-songwriter and pianist known for her smooth, soulful vocals. She was born on January 25th, 1981, in Manhattan, New York.

If you love karaoke, then check out Alicia Keys’ piano ballad, “If I Ain’t Got You,” on our best karaoke songs playlist.

Keys began writing and composing songs at the age of 12. Around that time, she also attended Professional Performing Arts School, where she focused on music, dancing, and theater and was signed to one of the biggest record labels in the world, Columbia Records, at 15.

After moving to Arista Records in 2001, she released her debut album, Songs in A Minor, which included the #1 hit, “Fallin’.” In 2003, she released The Diary of Alicia Keys, featuring another famous song, “If I Ain’t Got You.”

Alicia Keys is one of the world’s best-selling black female vocalists with experience in hip hop, pop, R&B, and soul. She also has an astounding collection of awards, including 15 Grammy Awards, 17 NAACP Image Awards, and 16 Billboard Music Awards, among countless others.

Mariah Carey is also one of the most successful female singers the music industry has ever seen, best known for her stunning five-octave voice and phenomenal vocal runs.

You’ll also see another Mariah Carey tune, “Anytime You Need a Friend,” on our best songs about friendship playlist.

Carey’s life began on March 27th, 1969, in Huntington, New York, where she learned to imitate her mother’s voice, an opera singer.

She released her self-titled debut album in 1990 after signing with Columbia Records and went on to experience a record-breaking solo career. Some of her most famous songs include “Always Be My Baby,” “All I Want For Christmas Is You,” and “Emotions.”

Nineteen of Carey’s songs have charted #1 on the Billboard Hot 100. She’s also earned five Grammy Awards, ten American Music Awards, and nineteen World Music Awards and was inducted into the Songwriters Hall of Fame in 2020.

Major blues and jazz star Jamesetta Hawkins (also known as Etta James) was born in Los Angeles, California, on January 25th, 1938. She eventually took the world by storm with her low-range, passionate voice between the early 50s and late 80s.

James began learning to sing at age five by participating in her church choir and, when she was 14, started a girl group called the Creolettes (which eventually was renamed the “Peaches”).

After leaving the group, she signed with Chess Records and released her debut album, At Last!.
Some of her most recognized hits include “I’d Rather Go Blind,” “At Last,” and “Something’s Got a Hold on Me.”

Although she passed away in 2012, her legacy lives on within her timeless music.

Ella Fitzgerald is known as the finest female jazz vocalist ever to live and is often referred to as the “Queen of Jazz” or “First Lady of Song.” She was born on April 25th, 1917, in Newport News, Virginia.

Growing up, she loved to dance and sing and was particularly fond of Connee Boswell’s voice (who she often tried to mimic). At age 17, she won first place at an Amateur Night at the Apollo Theater in Manhattan, New York.

She played and recorded songs with multiple bands, including Ella and Her Famous Orchestra, the Benny Goodman Orchestra, and The Three Keys.

Fitzgerald collaborated with many other famous artists throughout her career, including Duke Ellington, Louis Armstrong, and Count Basie. Some of her most popular hits include “A Tisket, A Tasket,” “Dream a Little Dream of Me,” and “Into Each Life, Some Rain Must Fall.”

The popular jazz singer won a National Medal of Arts, a Presidential Medal of Freedom, and fourteen Grammy Awards. She also received the Grammy Lifetime Achievement Award in 1967.

Fitzgerald died at age 79 in Beverly Hills, California, but her songs are still being sung and appreciated today.

Eleanora Fagan was known by her stage name, Billie Holiday, and was born in Philadelphia, Pennsylvania, on April 7th, 1915.

She is among the most influential black female singers who excelled in jazz and swing music with exceptional vocals and improvisational skills.

The jazz singer started singing at nightclubs in Harlem in her early teens, and at age 18, she made her recording debut with producer John Hammond. She released her first hit, “Riffin’ the Scotch,” in 1935.

Holiday went on to sign with various record labels, including Vocalion, Columbia, and Decca and enjoyed commercial success throughout the 1940s. Some of her most well-known songs are “I’ll Be Seeing You,” “Easy Livin,'” and “What a Little Moonlight Can Do.”

Although she passed on in 1959 at age 44, Billie Holiday remains among the most unforgettable artists of all time.

Diana Ernestine Earl Ross also makes our list of the most popular black female singers with her warm, rich vocals. She was born on March 26th, 1944, in Detroit, Michigan.

Ross stepped into the spotlight when she became the lead singer of the wildly successful Motown girl group, The Supremes, in the 60s. During her time with them, they had twelve #1 singles on the Billboard Hot 100, including “Baby Love” and “Come See About Me.”

After parting ways with the group in 1970, she enjoyed a profitable solo career. Her debut self-titled album quickly topped the charts worldwide, especially her cover of “Ain’t No Mountain High Enough.”

Other hits of hers include “Touch Me In The Morning,” “Love Hangover,” and “I’m Still Waiting.” The singer is also an accomplished actress, starring as Billie Holiday in multiple films, including Lady Sings the Blues (1972), Mahogany (1975), and The Wiz (1978).

She received Kennedy Center Honors, a Grammy Lifetime Achievement Award, and the Presidential Medal of Freedom and was also named Billboard’s Female Entertainer of the Century in 1976.

Gladys Knight, also known as the Empress of Soul, was born on May 28th, 1944, in Atlanta, Georgia. Today, the world recognizes her as one of the great soul singers of all time.

Knight rose to fame singing in a popular girl group, The Pips, throughout the 60s, 70s, and 80s, releasing major hits like “I Heard It Through the Grapevine” and “Midnight Train to Georgia.”

She’s also experienced solo success throughout her career, recording “Licence to Kill” for the 1989 James Bond movie and releasing several other famous songs like “That’s What Friends Are For,” “Missing You,” and “Heaven Help Us All.”

Knight is a seven-time Grammy Award winner and an inductee into the Vocal Group Hall of Fame and Rock and Roll Hall of Fame. She’s had eleven #1 songs on the R&B Singles chart, two #1 Billboard Hot 100 singles, and six #1 R&B albums.

The soul vocalist is currently touring the U.S. and parts of Mexico and releasing new tunes.

When you hear Whitney Houston’s name, you instantly think of her legendary powerhouse vocals and magnetic stage presence. She was born on August 9th, 1963, in Newark, New Jersey.

By 11, Houston was already performing as a soloist in her church choir and learning the ropes from her mother, who was a gospel singer.

After spending most of her teen years touring nightclubs and performing with her mom, she was discovered and signed a worldwide record deal with Arista Records.

In 1985, she released her self-titled debut album, which took over the R&B and pop charts and became one of the best-selling albums of all time. Among her most notable releases include “Saving All My Love For You,” “How Will I Know,” and “Where Do Broken Hearts Go.”

The singer boasts many accomplishments in her career, winning two Emmy Awards, six Grammy Awards, and sixteen Billboard Music Awards. She’s also an inductee in the Grammy Hall of Fame, Rhythm & Blues Music Hall of Fame, and the Rock and Roll Hall of Fame.

Sadly, this incredible vocalist passed away at 48 in 2012 but will forever go down in history as the best-selling female performer of all time.

Aretha Franklin was born on March 25th, 1942, in Memphis, TN, and tops this list as one of the most respected vocalists and black female singers the world has ever known.

Her song, “Respect,” also earned a spot on our best songs of all time playlist!

Like many famous black female singers, she started out singing gospel music in her church choir. By 18, Franklin signed with Columbia Records and became a professional recording artist.

Although she didn’t immediately rise to fame, she eventually found success after signing with Atlantic Records in 1966.

Through this label, she released some of her greatest hits, including “Chain of Fools,” “(You Make Me Feel Like) A Natural Woman,” and “I Say a Little Prayer.”

Throughout her successful solo career, Franklin won 18 Grammy Awards, the National Medal of Arts, and the Presidential Medal of Freedom and was the first female singer to be inducted into the Rock and Roll Hall of Fame.

Unfortunately, the accomplished songstress left this world at 76 in 2018. However, the world will always commemorate her sensational songs and soulful voice.

We hope you’ve enjoyed learning about the best black female singers of all time.

These women have changed the world and inspired many other artists with their unique musical gifts. So let’s give a round of applause to these phenomenal ladies!

Who’s the best black female singer of all time, in your opinion? Leave a comment below.

The 10 Best Female Country Singers of All Time

The 25 Best Female Singers of All Time