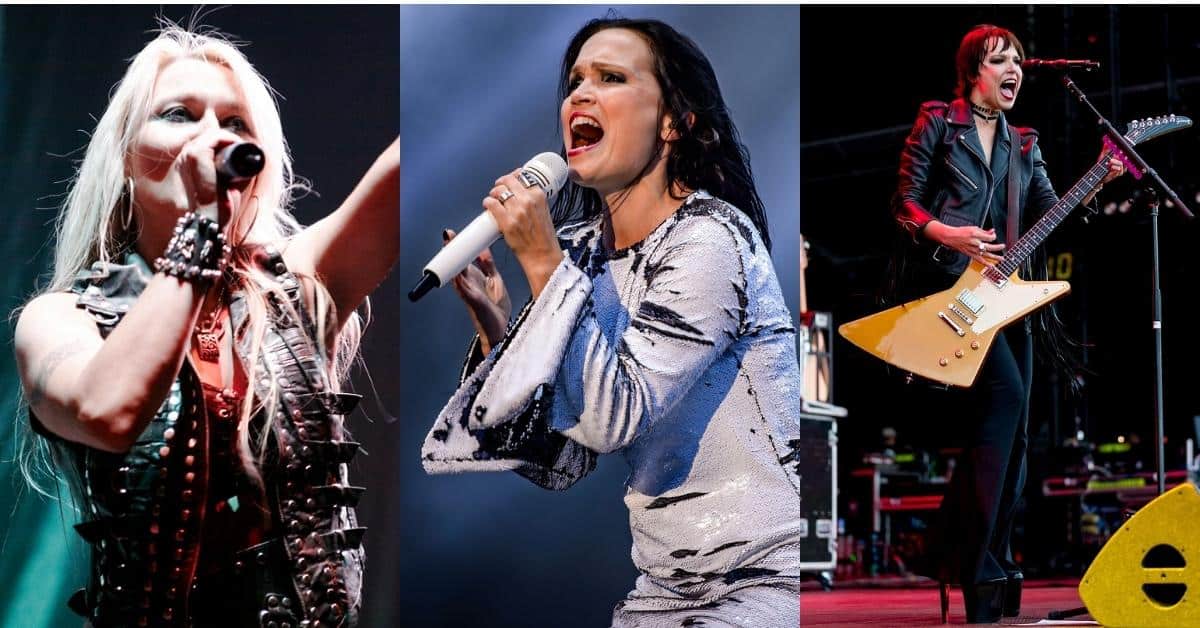 Historically, female metal singers have been the minority. However, recently they’ve proven that they can rock just as hard as the boys.

It’s incredibly inspiring to see these powerful women staking their claim in the metal genre, and it’s exciting to see them finally receiving well-deserved recognition for their talent.

The 10 Best Female Metal Singers of All Time

We’ve listened to countless female metal stars and selected who, in our opinion, are the all-time greatest metal vocalists the world has ever heard.

Here’s our list of the 10 best female metal singers of all time:

Kicking off our list of the top ten female heavy metal singers is Cristina Scabbia, a lead vocalist in the Italian metal band Lacuna Coil.

In 1991, Scabbia started her career as a background vocalist in various touring bands. She then met Andrea Ferro, the bass player of Lacuna Coil, and was later asked to sing backup for the band.

Eventually, the group signed with the German branch of Century Media and, in 1999, released their debut studio album. Some of their most famous hits include “Heaven’s A Lie,” “Swamped,” and “Fragile.”

Scabbia has also been featured on many other bands’ projects, including Apocalyptica’s “S.O.S. (Anything But Love),” Alter Bridge’s “Watch Over You,” Ayreon’s “The Theory of Everything” album, and Megadeth’s À Tout le Monde (Set Me Free).

Canadian singer Alissa White-Gluz has made a name for herself as the frontwoman of the Swedish melodic death metal band Arch Enemy.

She also is the former lead singer of the Canadian metalcore band, The Agonist.

White-Gluz released three albums with The Agonist and was then asked to join Arch Enemy in 2014. In 2016, she also signed a record deal with Napalm Records to release a solo album, Alissa.

Some of her most recognizable tracks from the band and her solo career include “War Eternal,” “Nemesis,” “Deceiver, Deceiver,” and “Demons Are a Girl’s Best Friend.”

In addition, Alissa has been featured on various songs from popular metal and deathcore bands like Kamelot, Delain, Powerwolf, and Carnifex and has performed with Nightwish’s Tarja Turunen.

Suzuka Nakamoto (stage names Suzuka or Su-metal) is a Japanese model and singer best known for her role as a versatile vocalist in the kawaii metal band Babymetal.

In 2007, the singer was signed to the talent agency, Amuse, Inc., which then created a trio called Karen’s Girls.

Later, Suzuka became a member of a new group called Sakura Gakuin and eventually released songs under the name Babymetal.

The group released their self-titled debut album in 2014 after signing with Ijime, Dame, and Zettai Records, which led to a successful tour outside Asia and plenty of media attention.

Some of the band’s greatest hits include “Headbangeeeeerrrrr!!!!!!,” “Gimme Chocolate!!” and “KARATE.”

Babymetal was the highest-charting Japanese band in the UK in 2016 due to their album Metal Resistance. In 2019, they became the first Asian act to top the Billboard Rock Albums chart.

Suzuka has achieved a variety of accomplishments during her time with Babymetal, earning the 2020 Japan MTV Video Music Award for Best Album of the Year, the Best Musical Act award at the 2014 NEO Awards, and the 2015 Breakthrough Award at the Metal Hammer Golden Gods Awards.

Lacey Nicole Sturm is one of the world’s greatest female metal artists, famous for her intriguing vocal style and passionate on-stage performance in the Christian hard rock band, Flyleaf.

Initially, Sturm had been playing in a band in Texas called Passerby with help from their booking agency, Runt Entertainment.

However, in 2004, they scored a record deal with Octone Records, which led to them changing their name to Flyleaf.

A few of their greatest hits include “All Around Me,” “Fully Alive,” and “I’m So Sick.” The band has also toured with multiple famous rock and metal acts, such as Disturbed, Stone Sour, Three Days Grace, Sick Puppies, Staind, and 3 Doors Down.

Throughout her music career, Strum has collaborated with various bands, including P.O.D., Third Day, Apocalyptica, We as Human, Skillet, Breaking Benjamin, Islander, Geno Lenardo, Resident Hero, and Love and Death.

Strum has won a BMI Pop Song Award and one AMTV Award with Flyleaf and has reached the #1 spot on the U.S. Hard Rock Albums chart in 2016 with their album Life Screams.

Amy Lynn Hartzler (born Amy Lynn Lee) is the co-founder and lead vocalist of one of the best female-fronted metal bands ever, Evanescence. She’s known for her ethereal voice and captivating stage presence.

If you’re an Amy Lee fan, check out our best songs about pain, suffering, & hurt playlist, which features the Evanescence song “My Immortal.”

Lee met guitarist Ben Moody at a youth camp after Moody overheard Lee singing a song and playing the piano.

From then on, the two started playing at bookstores and coffee houses in Arkansas, which eventually led to a record deal with Wind-up Records.

Among some of the band’s most notable singles are “Call Me When You’re Sober,” “Bring Me To Life,” “Going Under,” and “Tourniquet.” They’ve also collaborated with popular bands such as Korn, Seether, and David Hodges.

Lee has won numerous awards, including the National Music Publishers Association Songwriter Icon Award, Rock Goddess of the Year at the Loudwire Music Awards, the Powerhouse Award at the She Rocks Awards, and Best Vocalist at the Revolver Golden God Awards.

Simone Johanna Maria Simons is a Dutch singer who is the frontwoman of the symphonic metal band Epica.

Her captivating mezzo-soprano vocals and powerful growls have caused her to become one of the world’s greatest female singers the metal genre has ever heard.

In 2002, the band signed with Transmission Records, which led to touring with metal groups like Kamelot, Sabaton, and Apocalyptica.

Another of the greatest female heavy metal singers is Sharon Janny den Adel, the lead vocalist of the Dutch symphonic metal band, Within Temptation.

She’s been performing since the age of fourteen and played in various bands before forming Within Temptation with her high school friend, Robert Westerholt.

The band’s single, “Ice Queen,” reached #2 on the Dutch charts in 2001, which led to worldwide success. Some of their other fan favorites are “Faster,” “All I Need,” and “Angels.”

Den Adel has collaborated with a variety of other famous artists, from Tarja Turunen and Evanescence to After Forever and Delain.

In 2009, den Adel won Best Video and Best Progressive House/Trance Track for “In and Out of Love” at the International Dance Music Awards, and in 2011 and 2014, she won Rock Goddess of the Year at the Loudwire Music Awards.

Widely regarded as the “Metal Queen,” German-born singer Dorothee Pesch has become a global icon for metal music as the frontwoman of the heavy metal band Warlock.

Before making it big, Pesch began singing at age ten and played in various garage bands as a teenager. Then, in 1982, she formed Warlock and earned her first recording deal with Mausoleum Records.

After the release of the band’s debut album, Burning the Witches, Doro and her bandmates quickly garnered a loyal group of fans and media attention. A few of their heaviest hits include “All We Are” and “I Rule The Ruins.”

Warlock changed their name to Doro while under PolyGram Records, and when the band separated, Pesch chose to pursue a solo career, releasing tracks including “Love Me In Black,” “Brickwall,” and “If I Can’t Have You – No One Will.”

While she was performing with Warlock, they were one of the most influential metal bands of the 80s, touring with Megadeth, Dio, Scorpions, and more.

Overall, Pesch has released seventeen studio albums, many of which have topped charts across Europe, especially in her home country of Germany. In 1994, she won Best National Female Artist at the German Echo Awards.

Elizabeth Mae “Lzzy” Hale is an American singer-songwriter who has made her mark on the metal scene with her energetic stage presence and powerful vocals. She is widely recognized as the lead singer and guitarist for the popular hard rock band Halestorm.

Hale and her brother, Arejay, had been writing and performing since they were pre-teens, and in 1997, they formed Halestorm. In 2005, the band signed with one of the biggest record labels in the world, Atlantic Records.

Their debut self-titled album was released in 2009, featuring hit songs, “I Get Off,” “It’s Not You,” and “Love/Hate Heartbreak.” Other popular tracks include “Love Bites…(So Do I)” and “Uncomfortable.”

Hale’s many accolades include one Metal Hammer Golden God Award, one Inspire Award from the Women’s International Music Network, and a nomination for Best Rock Performance for the song “Uncomfortable” at the 2019 Grammy Awards.

Tarja started singing in her church choir at age three and was recognized in school for her exceptional musical talent.

In 1996, one of her former classmates asked her to join his music project, which eventually developed into the metal band Nightwish. The band then signed with Spinefarm Records, which led to the band’s debut album, Angels Fall First.

After leaving Nightwish in 2005, Tarja embarked on a solo career, releasing popular hits like “I Walk Alone,” “Until My Last Breath,” and “Poison.”

Tarja has sold over 100,000 certified records in her home country of Finland, which ranks her as one of the top 50 best-selling female solo artists.

We hope you’ve enjoyed this article about the best female metal singers in the world today.

Although all these women are genuinely gifted, Tarja’s incredible vocal range, musicality, and performance skills make her our top pick.

No matter what type of songs you’re looking for, these ladies will have your head banging in no time.

Who’s the best female metal singer in the world, in your opinion? Leave a comment below.

The 25 Hottest Female Singers In The World