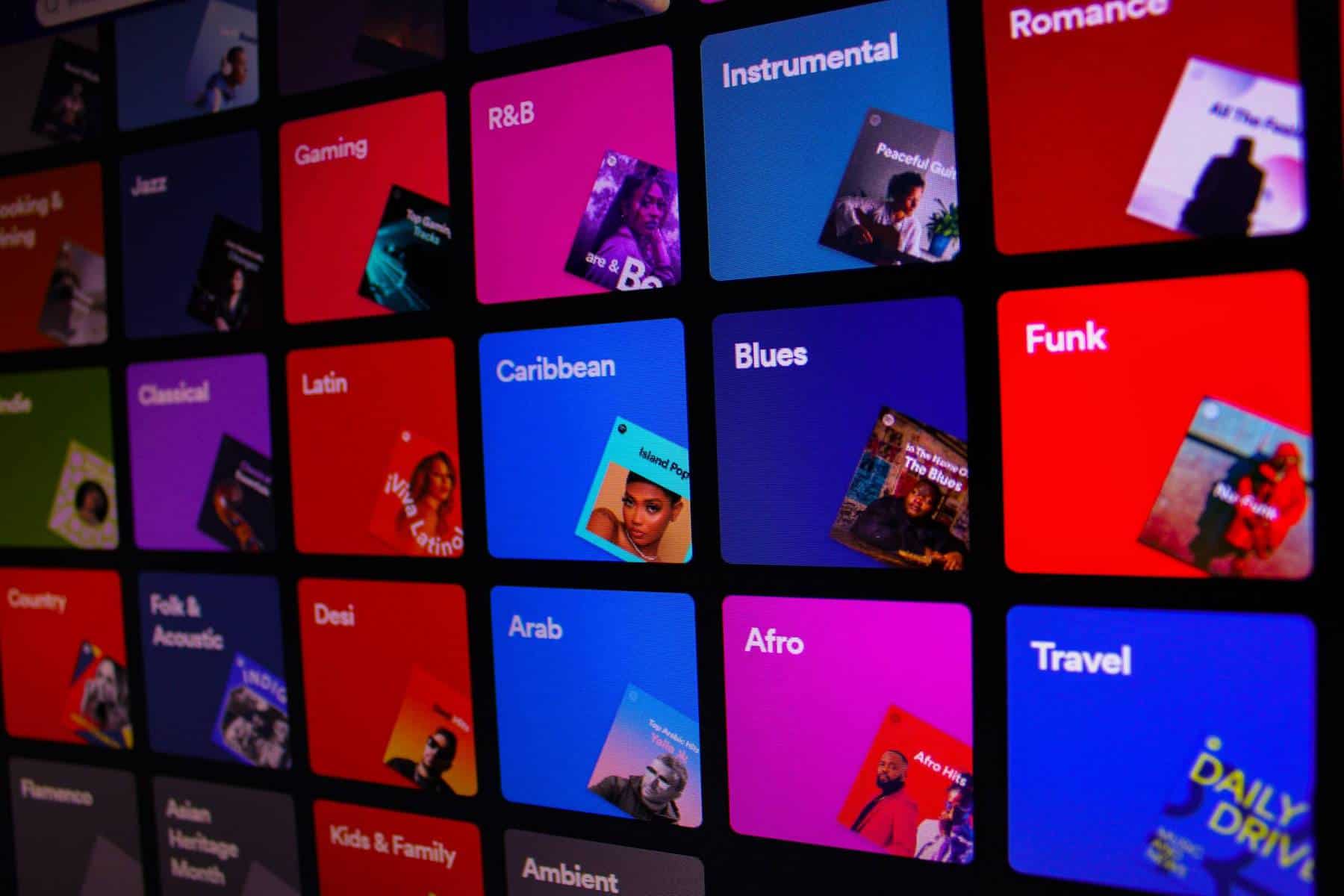 If you’re like us, we’re passionate about many of the most popular music genres. But, like you, we also have our favorites as well as genres that, well, make us cringe.

And that’s the beauty of music, isn’t it? What we deem the most popular genre of music may not be your cup of tea and vice-versa.

Besides, trying to settle “who’s the best” turns into a popularity contest.

Instead, in this article, we will focus on the most popular genres in the music industry and discuss their merits.

We hope this broadens your musical interests and opens your mind to investigating other musicians, bands, and artists.

The 10 Most Popular Music Genres

Some genres have been in existence for a long time and have subgroups, so we’ll briefly explain each to add further clarity.

Here’s our list of the 10 most popular music genres:

The quick and easy definition of “pop music” is any music that is popular during a particular time in history. Pretty vague, isn’t it? We think so.

A deeper dive into the topic will reveal that music deemed pop, even many decades ago, was measured against classical music.

Using this definition, one can go back to the 1900s when ragtime artists like Scott Joplin were considered pop.

Nowadays, Joplin would be lumped into the jazz category, but we hope you see our point.

With the advent of the radio, the 40s produced “pop” big-band groups like Glenn Miller and Duke Ellington and crooners like the Andrew Sisters.

When the 50s introduced the television, pop music became a household name. Now, fans could watch their favorite singers and bands while eating TV dinners.

The 50s were the era critics point to when rock and roll were born. Many cite 1954 as the “birth year of rock” when Bill Haley and the Comets released “Rock Around the Clock.”

With this understanding of pop music, we hope you’ll have a better appreciation for the following popular music genres that, by definition, fall under the pop category.

Hip-hop is one of the most popular music genres in the music industry. This art form had humble beginnings as an urban underground movement in the Bronx during the 70s.

Held at house parties or neighborhood block parties, the creative force behind hip-hop wasn’t a band or a singer but instead was an emcee (MC.)

The hip-hop movement of this timeframe had the following elements:

From this fertile ground emerged the controversial art form gangsta rap. The lyrical content, or raps, focused on gang life with references to violence and drugs.

Artists like Snoop Dogg and Tupac Shakur were prolific leaders of this popular music genre.

Nowadays, hip-hop has many styles and has impacted the fashion and magazine industry. There is a debate among fans today that hip-hop is no longer authentic.

Old-schoolers hold that hip-hop must stay true to its roots of protesting the plight of African-Americans. They disapprove of hip-hop artists who rap only to garner hits.

Contemporaries fire back that hip-hop music should focus on ways to evoke change for African-Americans.

Whichever side of the debate you are on, we can all agree that hip-hop will continue to be one of the most popular music genres in the music industry.

Although EDM may be considered a new music genre, it has its roots in the Disco era of the 70s.

Pop hits like “I Feel Love” by Donna Summers drew crowds into the discos. With the invention of the drum machine, clubs could intertwine disco hits with these beat machines.

In the 80s, MIDI (Musical Instrument Digital Interface) was invented and turned the music industry upside down.

With MIDI, instruments and computers could “talk” and play musical phrases and rhythms.

The 90s was when sub-genres that are popular today began to emerge on the EDM scene. Dance hits like “Chime” by Orbital even saw chart success.

Sub-genres include house, techno, trap, hardstyle, to name a few.

Nowadays, EDM has popularized remixes of pop hits like those of Taylor Swift and Justin Bieber, further evolving this popular music genre.

As stated previously, rock & roll began over 70-years ago with Bill Haley.

The 60s was known as the “British Invasion” when groups like the Beatles, Herman’s Hermits, and the Rolling Stones dominated the US charts.

As the decades rolled along, subgroups of the genre emerged. Soft rock included groups like America and the Eagles.

Acid or psychedelic rock was influenced by the Haight-Ashbury district of San Francisco, where experimenting with “acid” (LSD) was widespread.

Jefferson Airplane and the Doors were prominent artists of this sub-genre.

Progressive rock, or “prog rock,” combined classical music elements with rock to create epic compositions. Groups like Yes and Genesis were at the forefront.

Arena rock was prominent in the 80s with bands like U2, Def Leppard, and AC/DC.

The 90s gave us grunge artists like Nirvana, Soundgarden, and Pearl Jam.

Today, the rock genre isn’t as dominant as it was back in the day. Nevertheless, artists like The Foo Fighters, Muse, and the Red Hot Chili Peppers continue to pump out rock classics.

Rhythm and Blues (R&B) began in the late 40s when African-Americans combined blues with jazz music.

During the 50s and 60s, critics considered R&B a “lowbrow” art form compared to the sophisticated styling of jazz.

Unlike jazz, R&B relies on powerful downbeats, usually in 4/4 meter, played by the rhythm section.

Latin music has influenced many genres like classical and jazz, so we’ll focus on its impact on the pop industry.

Ricky Ricardo from the TV show I Love Lucy helped to popularize the art form. His character was the bandleader for a Latin pop band.

Another pioneer was Carlos Santana. He introduced Latin pop at Woodstock in 1969 with his hit, “Soul Sacrifice.”

Today, Latin pop continues to be one of the most popular music genres on the planet. It’s played worldwide by professional DJs from some of the best Latin record pools.

Although chart success and artist recognition aren’t as prevalent in the US and Europe, Mexican singer Thalia is hailed the “Queen of Latin Pop.”

One of the most unlikely and yet, well, fun genres comes from South Korea. The “K” stands for Korea, and this musical art form is gaining international popularity, as are K-dramas.

So how did K-Pop become so popular? Some critics claim that the current trend in western pop music has something to do with it.

Many of today’s artists are low-energy performers who sing softly on introspective topics. In contrast, K-Pop is upbeat, fun, colorful, and stimulating.

Here’s the kicker: most artists sing in Korean and don’t translate for the US or European audiences. And despite this seemingly suicidal marketing ploy, K-pop is one of the world’s top music genres.

K-pop is more of a geographic label than it is a musical roadmap. The genre is full of solo artists, boy bands, girl bands, and even rappers.

Such success didn’t come overnight. In the 90s, Seo Taiji and Boys hit “I Know” is credited as starting K-pop sensation. In the ensuing years, artists like SHINee and Girls’ Generation continued K-pop’s momentum.

Currently, boy band BTS are international stars, making millions, dancing like Jagger, and proving why K-pop is one of the most popular genres in the music industry.

Country music has its roots in bluegrass, Texas swing, folk, and gospel and originated in the Southern states and Texas.

Today, most associate country music with classic artists like Johnny Cash and Dolly Parton, but the categories above still apply today.

Although bluegrass artists still perform on The Grand Ole Opry, contemporary bluegrass has an underground following. This is due to the lack of radio airplay by even country radio stations.

Contemporary bluegrass artists like Nickel Creek and Alison Krauss have successfully crossed over into country and pop markets.

Western swing is another subgroup. Groups like Asleep at the Wheel, Texas Playboys, and Lyle Lovett fall into this category. But when most people think of country music, they think of today’s stars.

Today, artists like Carrie Underwood, Brad Paisley, and Chris Stapleton continue to make country one of the most popular genres of music.

Classical is a massive category with so many subgenres that we will only focus on the popular categories.

As mentioned earlier, other music forms were measured against classical music. Such categorization gave us the word “pop,” which was slang for “popular music.”

Classical music began in Western Europe in the Middle Ages. Early compositions from this timeframe were sacred works often commissioned by the church.

Aside from the church, royalty financed many of the music played today in symphonies. Such financial backing reassured musicians they wouldn’t starve but often came at the expense of limiting creative compositions.

Here are the subcategories most associated with classical music:

As you can see, “classical” is a subgroup of its own, which can be confusing unless you’re a student of this art form. In general, most people lump all the above categories into “classical music.”

For instance, here is our list of some masters and their affiliating genres:

Although one could argue that classical music is stagnant, because of these masters, it will forever be one of the top music genres.

Metal began back in the 60s, and groups like Led Zeppelin and Black Sabbath are considered pioneers. The heavy sound these groups created paved the way for today’s metal artists.

Led Zeppelin’s “Immigrant Song” is a prime example. Listen to John Bonham’s dynamic and pounding drum groove and how it links with Page & Jones’ biting guitar and bass lines.

Toss in Robert Plant’s opening high-pitched wail, and you can reason why Zeppelin was labeled heavy metal and how their sound influenced today’s artists.

Like other music categories, metal has subgroups as well.

Shock rock would include artists like Kiss and Alice Cooper. Although true “metalheads” would argue they don’t belong in the metal category.

Glam metal hit in the 80s with the likes of Bon Jovi and Motley Crue. There is also thrash and death metal and black metal, which tend to have an underground following.

Another musical characteristic of metal is that the guitars and basses down tune. This subtle lowering of the pitch in the strings gives metal its deep and dark tones.

Groups like Metallica, Iron Maiden, and Avenged Sevenfold are at the forefront of today’s metal success.

Although not as popular as it was a few decades ago, metal continues to have a solid fan base proving that it is still a popular music genre.

We hope you enjoyed our list of the 10 most popular music genres.

Although we can’t crown one category as the best music genre or the most popular music genre of all time, we think you’ll agree that there are many fantastic genres to explore.

What’s your favorite genre of music? Leave a comment below.

Top 10 Singers That Use Auto-Tune