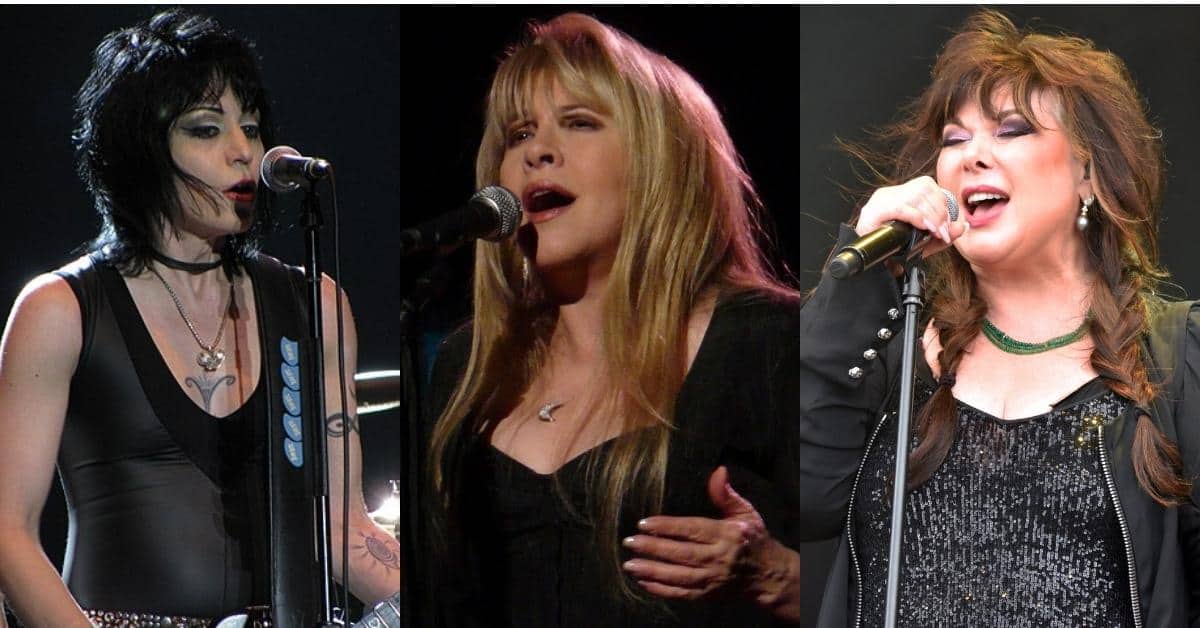 Female rock singers have made their mark on the music industry with their astounding vocals and boss attitudes.

These powerful ladies have written and performed some of the greatest hits from the genre.

Although these women may not have been celebrated in times past because rock ‘n roll used to be a boys club, we think they deserve some applause.

We’ve listened to many talented female musicians and picked the ones who, in our opinion, are the all-time greatest female rock stars.

Here’s our list of the 10 best female rock singers of all time:

Hayley Nichole Williams is one of the best female singers of all time and serves as the lead vocalist of the popular rock band Paramore.

She’s best known for her powerful belting ability, energetic performances, and dedication to the punk scene.

Williams was discovered in 2003 at fourteen years old, signing a record deal with one of the biggest record labels in the world, Atlantic Records.

Initially, the label wanted her to be a solo pop artist, but Williams declined, saying she’d rather be in a band and play pop-punk songs.

Chances are, you’ve probably heard some of her most famous tunes, “Misery Business,” That’s What You Get,” “Decode,” and “Ain’t It Fun.”

Her many accolades include two People’s Choice Awards for Favorite Rock Band in 2010 and 2011. She also went on to win Best Rock Song for “Ain’t It Fun” at the 2015 Grammy Awards.

Anna Mae Bullock (a.k.a. Tina Turner) is known as the Queen of Rock ‘n Roll, recognized for her raspy and intense vocals and electrifying stage presence.

It’s guaranteed that you’ll instantly know Turner is singing when one of her classic rock songs plays!

Turner started performing with her former husband, Ike Turner, in their musical duo from 1960 to 1976.

Then, in 1984, she rose to fame as a solo artist with the help of one of the best artist management companies in the music industry, Agency for the Performing Arts.

She went on to release her multi-platinum album, Private Dancer, which won the hearts of millions.

A few of her greatest tracks include “What’s Love Got To Do With It,” “Typical Male,” “Proud Mary,” and one of the best karaoke songs of all time, “The Best.”

Several of her greatest accomplishments include twelve Grammy Awards, three Grammy Hall of Fame awards, one Grammy Lifetime Achievement Award, one Kennedy Center Honors Award, and one Woman of the Year Award.

Turner is the first black artist to be featured on the cover of Rolling Stone magazine and was the oldest female solo artist to hit #1 on the Billboard Hot 100 at 44.

In 1988, she set a Guinness World Record after performing for an audience of 180,000, the largest paying audience in music history. Her 50th Anniversary Tour in 2009 was also the 15th highest-selling tour of the 2000s.

Another phenomenal female rock singer is a guitarist, songstress, and songwriter from Ohio, Christine Ellen Hynde. She’s best known as the female lead singer who founded the rock band, The Pretenders.

After hopping around from various bands in her early career, Hynde eventually formed The Pretenders in 1978. The group gained popularity after releasing their hit single, “Brass in Pocket,” which charted #1 in the UK in 1980.

Hynde has contributed to countless duets and covers, from “Days” with Elvis Costello and “Give It Up” with Annie Lennox to “Love and Tears” with Naomi Campbell and “Luck Be a Lady” with Frank Sinatra.

The singer won an Ivor Novello Award for Outstanding Contribution to British Music in 1999, received three Grammy nominations, and was inducted into the Rock & Roll Hall of Fame in 2005.

Linda Maria Ronstadt was one of the few female rock vocalists who experimented with various genres, from rock and folk to country and opera.

When she was 14, Ronstadt began singing with her siblings in a folk trio, but she longed to unite folk music with rock ‘n roll.

At eighteen, she moved to Los Angeles and joined a band called The Stone Poneys, who was already signed to Capitol Records.

In 1969, she released her first solo album, Hand Sown…Home Grown, which is known as the first-ever alternative country album by a female artist.

Some of her most popular hits include “Wildflowers,” “Blue Bayou,” and “You’re No Good.”

She has won eleven Grammys, three American Music Awards, two Academy of Country Music Awards, one Emmy Award, an ALMA Award, one Latin Grammy Lifetime Achievement Award, and a star on the Hollywood Walk of Fame.

The singer charted thirty-eight Billboard Hot 100 singles and sold over 100 million records throughout her career. In 2014, she won the National Medal of Arts and Humanities and was inducted into the Rock & Roll Hall of Fame.

Patricia Mae Giraldo (a.k.a. Pat Benatar) is one of the greatest females in rock music, famous for her pop-infused sound.

In her early years, she trained as an operatic singer hoping to attend Juilliard but chose to pursue health education at Stony Brook University.

After dropping out of school to get married, she formed a duo and began performing locally, which led to her signing with Chrysalis Records in 1978.

Among her most popular hits are “Heartbreaker, “We Live for Love,” “Love Is A Battlefield,” “Sex as a Weapon,” and “All Fired Up.”

She’s won four Grammy Awards for Best Female Rock Vocal Performance for her songs “Love Is a Battlefield,” “Shadows of the Night,” “Fire and Ice,” and “Crimes of Passion.” In addition, Benatar has also earned three American Music Awards.

Deborah Ann Harry (born Angela Trimble) is an American singer, songwriter, and actress best known for being the lead singer of the popular rock band Blondie.

In the late 60s, Harry started her career as a background vocalist in a folk rock band, The Wind in the Willows.

She co-founded Blondie in 1974 and started releasing famous hits like “Heart of Glass,” “Rapture,” and a cover of “The Tide is High.”

A few of their other famous tunes include “One Way Or Another,” “Dreaming,” and “Call Me,” which went on to receive a Grammy nomination.

In 1981, Harry embarked on a brief solo career and began acting, appearing in Videodrome in 1983, Hairspray in 1988, and Tales from the Darkside: The Movie in 1990. In 1997, she returned to the band, and they began working together again.

Blondie had four #1 singles between 1979 and 1981 and has sold over 40 million records worldwide.

Janis Lyn Joplin was a Texas-born singer from the late 60s who rose to fame with her riveting stage presence and intriguing bluesy vocals.

When she was a teenager, Joplin made friends with a group of outcasts who listened to blues artists, ultimately leading to her decision to pursue a career as a singer.

In 1966, she caught the attention of a San Francisco band, Big Brother and the Holding Company, which recruited her to join.

In 1969, she parted ways with the band and performed with other bands, including the Kozmic Blues Band and Full Tilt Boogie Band.

A few of her greatest tracks include “Cry Baby,” “Ball and Chain,” “Summertime,” and “Piece of My Heart.”

Joplin has sold over 18.5 million albums worldwide and earned a spot in the Rock & Roll Hall of Fame in 1995.

The rock singer also earned a star on the Walk of Fame on Hollywood Boulevard and won a Grammy Lifetime Achievement Award in 2005.

Joan Marie Larkin was a force to be reckoned with in the music industry during the mid to late 70s and continues to rank among the best female rock singers in history.

Her charisma, unique mezzo-soprano voice, and glam rock fetish earned her a spot as the lead singer of her first band, The Runaways, and eventually the international sensation Joan Jett & The Blackhearts.

The band released several chart-topping hits, such as “I Love Rock ‘n Roll,” which appears on our best 80s songs playlist, “Do You Wanna Touch Me (Oh Yeah),” and “I Hate Myself For Loving You.”

Jett also made appearances in a variety of TV shows and films, including the Broadway production of The Rocky Horror Picture Show (2000), By Hook or by Crook (2002), and Big Driver (2014).

The rock star won the AP Icon Award and Golden God Award in 2014 and, in 2015, was inducted into the Rock & Roll Hall of Fame. In addition, three of Jett’s albums became platinum or gold.

Ann Dustin Wilson is famous for her incredible singing and songwriting and is the lead singer of the rock band Heart, which was the first hard rock band led by women.

In the early 70s, Wilson joined a local band called White Heart, which eventually shortened its name to Heart after a few name changes.

Once Ann’s sister Nancy Wilson joined the group, they moved to Canada and began releasing music that took the world by storm.

Some of Heart’s greatest hits include “Magic Man,” “Crazy On You,” “All I Wanna Do Is Make Love to You,” and “Barracuda.”

Heart boasts twenty top-forty singles and has sold over 35 million records, with seven albums earning a spot in the Billboard 200 top ten.

Wilson received a star on the Hollywood Walk of Fame, along with her sister and other bandmates, in 2012 and was inducted into the Rock & Roll Hall of Fame in 2013.

In 1975, she became the lead singer of Fleetwood Mac, one of the few female-fronted rock bands, and in 1981, she embarked on a solo career while remaining a member of the band.

Some of her most recognizable hits include “Dreams,” which is featured on our best songs of all time playlist, “Edge of Seventeen,” “Whole Lotta Trouble,” “Planets of the Universe,” and “Talk to Me.”

Rumours, Fleetwood Mac’s second studio album, is one of the best-selling albums in the world and is 20x certified platinum in the United States. The band also ranks among the highest-grossing music acts of all time, selling over 120 million records.

Nicks has earned eight Grammys and three American Music Awards as a solo artist. She’s also the first woman to be inducted into the Rock & Roll Hall of Fame twice (once for Fleetwood Mac and once for herself).

These women courageously broke through the gender barrier and became some of rock music’s finest musicians.

If you’re looking for some empowering anthems, you’re sure to find them in these ladies’ song catalogs. You won’t be disappointed!

Who’s the best female rock singer of all time, in your opinion? Leave a comment below.

The 10 Best Female Jazz Singers of All Time

The 10 Best Female Metal Singers of All Time