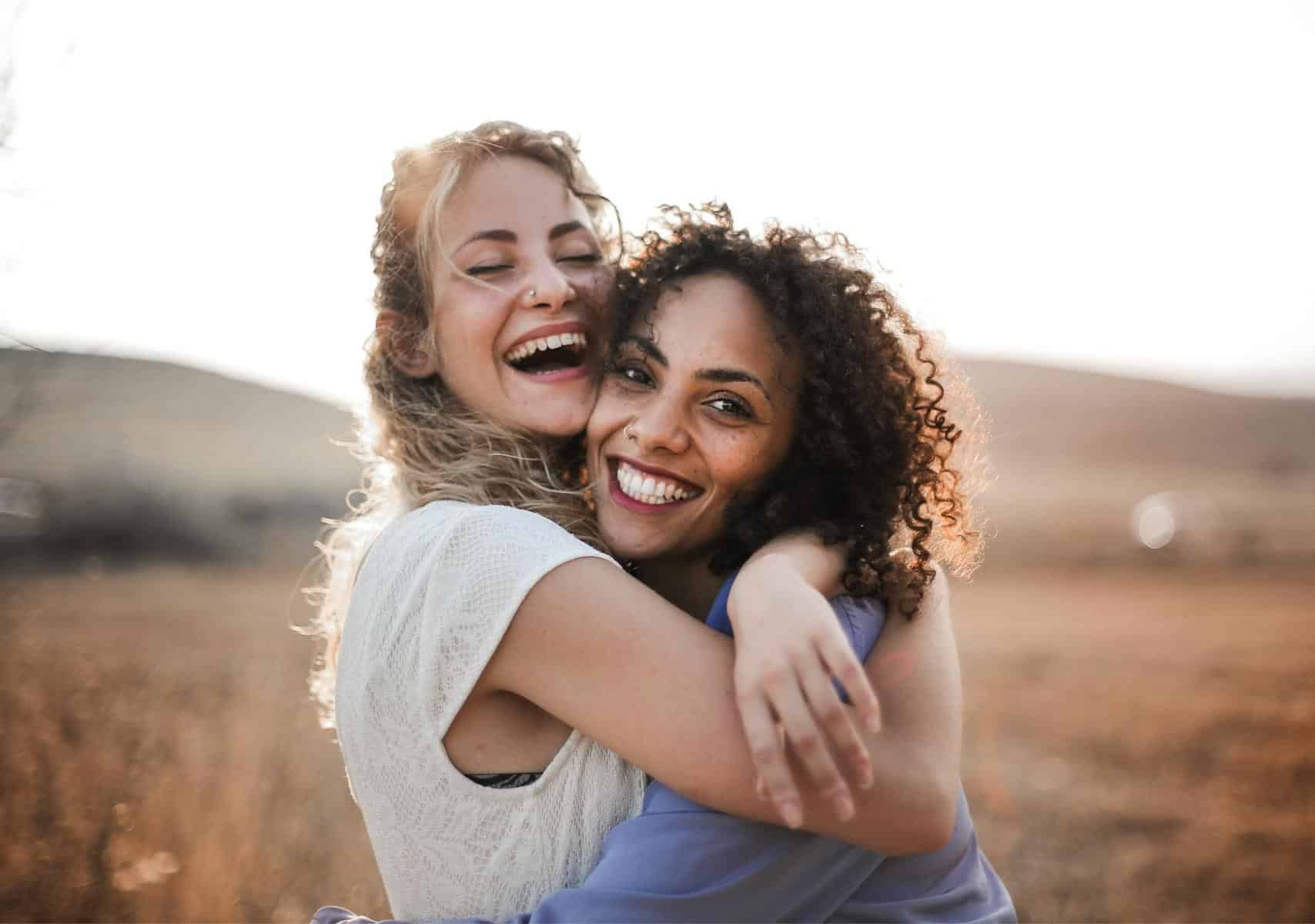 The best songs about friendship will make you appreciate the true friends by your side. After all, your bros and gal pals are the ones who are always there for you on your brightest and darkest days.

In this article, we’ll share some of the most iconic songs that celebrate friendship and the incredible joy it brings.

We’ve listened to countless songs to determine the best comradery tunes ever recorded and performed. Now, we’re sharing them with you!

Here’s our playlist of the 33 best songs about friendship & best friends:

33. Good Friends And A Glass Of Wine – LeAnn Rimes

After a rough day, all you really need is a couple of good friends and a glass of wine!

This is a perfect tune for the ladies, whether you’ve ended a few romantic relationships or just had a tough time at work. It paints a picture of sitting down with friends and talking about life.

“Good Friends And A Glass Of Wine” was the second single from Rimes’ 12th studio album, Family, and peaked at #35 on the Hot Country Songs chart in 2008.

Grab a box of tissues for this one, as it’s among the saddest songs about friendship on this list.

“See You Again” was written as a tribute to famous Fast and Furious actor Paul Walker, who passed away after a car accident in 2013.

The emotional track was the highest-selling song in 2015 and topped the Mainstream Top 40 chart within the same year.

Here’s another great best friend song in the country genre, but it has a more somber tone this time.

The song features a narrator who has lost his best friend and is remembering all the wonderful memories they made together.

If you’re searching for more fun Cyndi Lauper songs to sing with your best friend, check out “Girls Just Want To Have Fun” on our best 80s songs of all time playlist.

“Time After Time” is one of those songs that can be about a romantic relationship or a reminder to your best friends that you’ll always catch them when they fall.

“Friends” is a rock song released off The Beach Boys’ 1968 studio album, Friends.

It’s one of those friendship songs that talks about the ups and downs in friendships and how difficult times can help strengthen our relationships.

Now, we’re flashing back to 1970 to one of the best friend songs in the folk-pop genre.

“Where You Lead” describes the relationship between a man and a woman who are lovers and best friends. The woman says she has devoted herself entirely to him and vows to follow him anywhere.

This folk-pop hit served as the theme song for the popular TV series Gilmore Girls. Barbra Streisand also recorded a version that reached #40 on the Billboard Hot 100 in 1971.

27. I Turn To You – Christina Aguilera

“I Turn To You” was first recorded by the R&B group, All-4-One, and talks about how we all have those special friends we can turn to for support.

You’ll also see this pop artist featured on our best 90s songs of all time playlist with “Genie in a Bottle.”

If you love R&B, you’ll surely enjoy this classic tune from Brandy.

In “Best Friend,” the female narrator tells her friends that she’s got their back and knows they’ve got hers.

This tune consists of Carey telling her lover that she’ll be there for him if he ever needs a friend.

You’ll see more of Mariah Carey on our best songs of all time playlist, featuring her holiday song, “All I Want For Christmas Is You.”

Celebrate a true friend with this R&B hit by TLC!

This catchy tune talks about the struggles of distinguishing between fake friends and real friends that won’t turn on you.

23. All My Friends – LCD Soundsystem

“All My Friends” is an indie rock song that’s perfect for reminiscing about your younger years.

The lyrics discuss the joy of friendship and the feeling of wanting to go back to the good old days and hang out with old buddies.

Pitchfork ranked it as the #1 single of 2007. “All My Friends” also charted at #41 on the UK Singles Chart in the same year.

“Friends” was written for the movie Friends and talks about how having a friend has a way of making life much better.

There’s no better classic friendship song than “Stand By Me” by the legendary Ben E. King.

In it, the narrator asks his friends to stand by him whenever they encounter trouble in their lives.

20. Always Be Together – Little Mix

This hit is the perfect “friends forever” ballad to share with your best friend.

“Always Be Together” talks about being friends for life with your best girlfriends and reminding them that you’ll always be by their side.

The pop song was their 4th track off their album, DNA, which peaked at #3 on the UK Albums chart in 2012.

“I’ll Be There” is one of the best singles in Motown history!

It features a narrator telling his former love interest that he will be there for her no matter what; however, it can also be considered a song about close friends.

“I’m Only Me When I’m With You” is a country song concentrating on the beautiful friendship between a couple that allows them to be completely themselves around each other.

The tune is off Swift’s self-titled debut studio album, the longest-charting album on the Billboard 200 during the entire 2000s.

This Spice Girls song has also been featured on our best summer songs and best sweet 16 songs playlists.

As one of the world’s most iconic best friend songs, “Wannabe” is about prioritizing your gal pals instead of a romantic relationship.

The song was the highest-selling single from a female British group in 2012.

This Bruno Mars hit uniquely blends folk music with tropical sounds to create one of the greatest best friend songs ever.

The lyrics focus on helping friends who are in need of comfort during difficult seasons of life.

“Graduation (Friends Forever)” is one of those songs that you most commonly hear at high school graduations (at least in the early 2000s).

The pop hit is a response to the reality that many best friends drift apart after graduation.

The featured artist on the song, Doja Cat, also appears on our playlist of the best TikTok songs playlist with her song, “Woman.”

“Best Friend” is a fun, up-tempo pop-rap jam meant to hype up every girl’s beauty, success, and independence.

This one is for all the ladies looking out for their fellow females.

“Girl” was written by members Beyoncé and Michelle Williams as a plea to Kelly Rowland to get out of her then-abusive relationship.

The R&B hit by Destiny’s Child went #23 on the Billboard Hot 100 and charted in the top ten in the UK, New Zealand, Ireland, and Australia in 2005.

“Friends In Low Places” is one of the best country songs about friendship.

People brag about having “friends in high places,” but this song talks about friends in “low places,” meaning people who aren’t wealthy or famous.

11. Started From The Bottom – Drake

You’ll find this awesome track on our best songs about winning playlist, which will surely inspire you.

“Started From The Bottom” is a shoutout to all Drake’s real friends who supported him as he worked to make a successful music career.

Thanks to this hit, Drake took home a BET Hip Hop Award for Track of the Year in 2013.

This is one of the best hip hop best friend songs that you need on your music playlist!

The lyrics focus on the people who’ve stood by us and the fake friends who left. It states there’s no need to make new ones when you’ve already got the best!

Here’s another hip-hop song you can jam to while cruising around town with your best friends.

Although you may think “Best Friend” is about Young Thug’s close friend, it’s actually a song about himself and how he’s his own BFF.

8. We’re Going To Be Friends – The White Stripes

If you’re looking for a chill, folk-rock song about old friends, this is the perfect song for you!

Its nostalgic and simple lyrics take the listener back to when they made a new friend at school.

“We’re Going To Be Friends” made it onto the 2004 film Napoleon Dynamite and also became a children’s book in 2017.

7. Thank You For Being A Friend – Andrew Gold

Chances are, you’ve heard “Thank You For Being a Friend” by Andrew Gold as The Golden Girls’ theme song.

Its lyrics discuss how friendship stands the test of time, and true friends will always stay with you as you age.

6. With A Little Help From My Friends – The Beatles

If you check out our best songs about money playlist, you’ll find another Beatles song, “Can’t Buy Me Love.”

This song about friends features a lonely narrator who is getting by with support from his friends in his darkest hour.

5. That’s What Friends Are For – Dionne Warwick

Another of the best friendship songs is “That’s What Friends Are For,” originally recorded by Rod Steward for the 1982 movie Night Shift.

However, in 1985, Dionne Warwick recorded a version of the song to help raise money for AIDS research.

In 1986, it won a Grammy Award for Best Pop Performance by a Duo or Group with Vocals and Song of the Year.

“You’ve Got a Friend In Me” was written specifically for the 1995 Pixar film Toy Story.

The tune talks about the friendship between the main characters, Andy, and his toy cowboy, Woody.

Bill Withers is no stranger to our playlists, as he appears on our list of best easy songs to sing and best songs about missing someone with “Ain’t No Sunshine.”

This tune points out life’s hardships and tells listeners that they can rely on the narrator if they ever need help.

2. I’ll Be There For You – The Rembrandts

This beloved tune is the theme song to the 1994 NBC sitcom Friends.

In the song, the narrator assures their friend that they’ll be there for them through the good and bad times.

It was the most successful single in Canada in 1995 and took the #1 spot on the U.S. Adult Contemporary chart in the same year.

Bass player John Deacon originally wrote the classic rock song for his wife and became more of a hit than first anticipated.

Check out Queen’s other anthem, “Bohemian Rhapsody,” on our best karaoke songs playlist.

We hope you’ll play a few of these songs about friendship the next time you’re hanging with your besties!

Whether it’s a sentimental ballad or a cheerful party anthem, we’re positive you’ll discover the theme song for your friendship.

What’s the best song about friendship, in your opinion? Leave a comment below.

41 Best Songs About Helping Others & Being Supportive

The 100 Best Songs of All Time