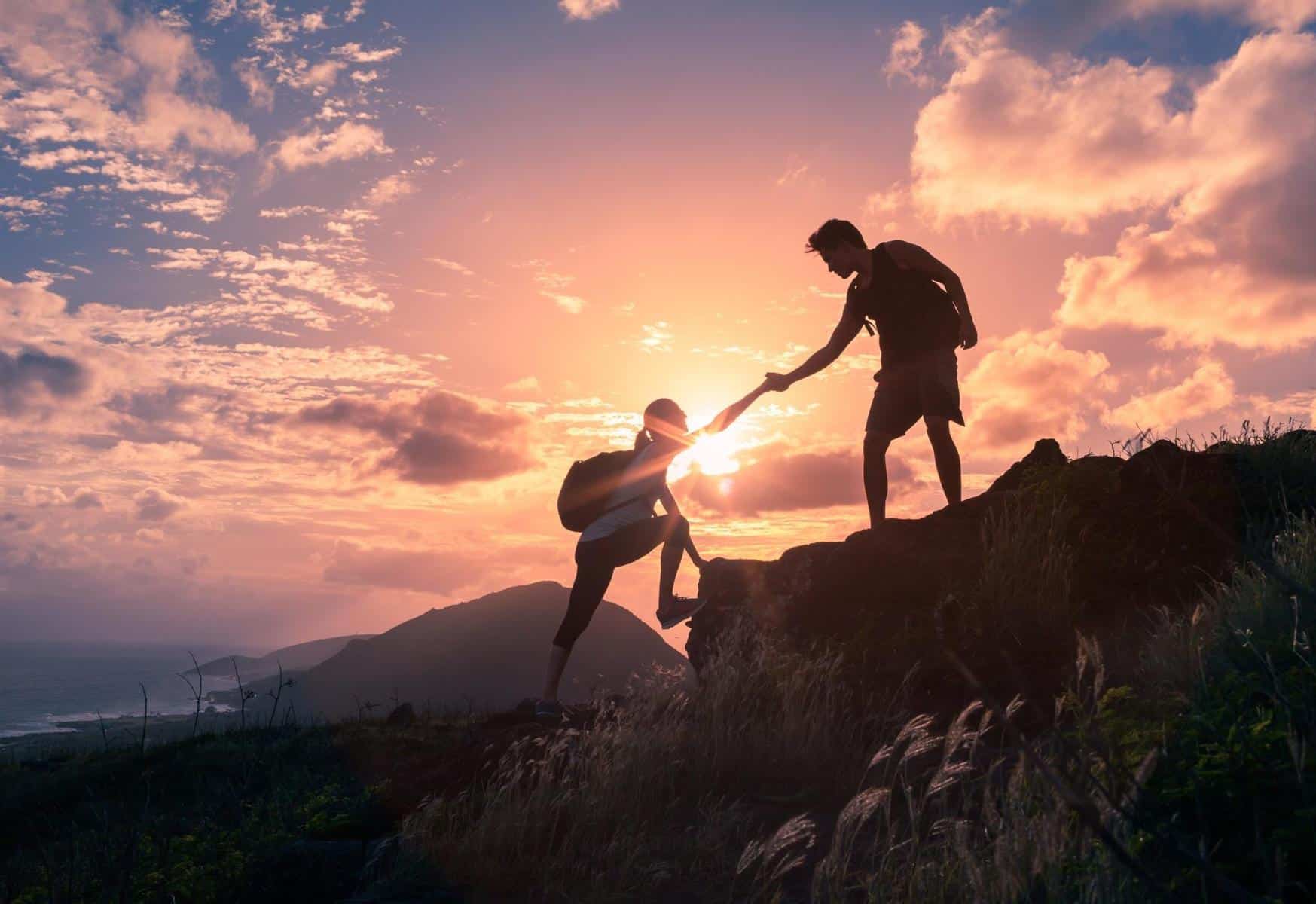 Songs about helping others remind us to lend a hand to those around us.

At some point, someone in your life will need support, whether they’re experiencing a breakup, lost their job, or are dealing with an illness.

Thankfully, an uplifting song can inspire us to brighten someone’s life and sometimes even help us cope with our own.

The Best Songs About Helping Others & Being Supportive

We’ve listened our way through countless music catalogs for the most significant tunes about kindness so that we can share them with you.

Here’s our playlist of the 41 best songs about helping others & being supportive:

“At Your Side” is the 10th song from The Corrs’ third studio album, In Blue.

This pop-rock song describes the comfort and support that the narrator offers their loved ones.

Sometimes, you need someone to tell you the truth and keep you humble.

“Song For A Friend” talks about the wise advice you get when you’re with good friends looking out for you.

It’s the 12th song on Mraz’s second studio album, which peaked at #5 on the Billboard 200 chart.

“Have Faith In Me” is a song about keeping your word and being there for people in your life.

It’s hard not to worry, but this song speaks about not letting our worries control us.

In “Don’t You Worry ‘Bout A Thing,” Wonder tells his lover not to be afraid because he’s always with her.

37. I’ll Stand By You – Carrie Underwood

You’ll also find “The Champion” by Carrie Underwood on our best songs about winning playlist.

“I’ll Stand By You” talks about showing love and faithfulness to a loved one during tough times.

This upbeat song offers hope for those walking through difficult times.

The track is about feeling sad and looking forward to better things in the future.

“I Won’t Let Go” is one of the most uplifting country tunes ever written.

This song is about the strength and love of friends, family, and religious relationships that keep us grounded.

The song peaked at #2 on the Billboard Hot Country Songs chart in 2011.

34. I’m Gonna Love You Through It – Martina McBride

This song tells the story of a woman battling breast cancer as her husband helps her.

“I’m Gonna Love You Through It” is a power ballad that inspires strength and hope for people facing tough times.

“Try A Little Kindness” shares an excellent example of how to light up someone’s life.

The lyrics focus on offering compassion and sharing “a little kindness” with people you encounter.

Here’s a pop-rock hit that can remind us all that we’re not alone in this life.

“I’ll Be There For You” is about supporting and comforting someone during their time of need.

The song reached #5 on Canada’s Top Singles and #25 on the Canadian Adult Contemporary chart in 1998.

“Somebody’s Daughter” is one of the finest songs in country music today.

It was inspired by a homeless woman that Tenille and her mother saw on the street.

In 2019, the song won a Canadian Country Music Association Award for Single, Song, and Video of the Year.

The heartfelt lyrics are about a guy who is in a long-distance relationship and misses his girl.

Listen to this electropop single when you’re on the brink of giving up.

“Carry You” reminds listeners that everything will be alright and that they are not alone in their pain.

The song appears in many popular TV series, including Grey’s Anatomy (2018) and Shadowhunters (2019).

28. How Can I Help You Say Goodbye – Patty Loveless

“How Can I Help You Say Goodbye” is one of the most somber classic country songs ever written.

In it, Loveless tells different stories of times in her life when she had to say goodbye to people she loved.

The song hit #3 on the Billboard Hot Country Singles chart, remaining for 20 straight weeks in 1994.

You’ve already seen Carrie Underwood’s version, but the original recording is from The Pretenders.

“I’ll Stand By You” addresses a friend who’s hurting, reminding them that they have someone on their side.

“He Ain’t Heavy He’s My Brother” was first recorded by Kelly Gordon in 1969.

The lyrics talk about the narrator’s duty to carry his family member through a trying situation.

Bon Jovi is also included in our best songs about memories playlist with “(You Want To) Make a Memory.”

The narrator in this power ballad tells his former lover that he’ll be there for her if she takes him back.

“Count On Me” was the fourth single off the Waiting to Exhale movie soundtrack from 1995.

The dynamic duo declares their pledge of friendship and dedication to each other in this R&B ballad.

The tune charted at #4 on the Billboard Adult Contemporary chart and hit #12 in the UK in 1996.

Here’s a timeless love song that even made it as the lead single for the 1991 movie Robin Hood: Prince of Thieves.

“(Everything I Do) I Do It For You” features a man telling his woman that he will help and protect her always.

It sold over 15 million copies worldwide in 1991 and went #1 on the UK Singles Chart in the same year.

This track could be a pick-me-up for a struggling friend.

It describes the narrator intervening in the life of someone participating in self-destructive behavior.

If you check out our best summer songs playlist, you’ll see this group again with their hit, “Good Vibrations.”

“Help Me, Rhonda” is about a man pleading with a woman to help him get over the heartbreak she caused him.

The catchy rock tune became the band’s second #1 single after soaring to the top of the Billboard Hot 100 in 1965.

Lavigne is also featured on our best songs about missing someone playlist with “When You’re Gone.”

This emotional track encourages listeners to stay strong and never give up no matter what.

It won a Pop/Rock Music Award at the 2008 SOCAN Awards and also appeared on the soundtrack of the 2006 film Eragon.

Josh Groban has certainly sung his share of uplifting songs, and this is his best.

“You’ll Never Walk Alone” is from the 1945 musical, Carousel and is sung to comfort a character after her husband dies.

Groban was the #1 best-selling artist in the U.S. in 2007, and his cover has garnered over 5 million YouTube views.

Here’s a pop-rap hit from 2003 that addresses the many perils of our world.

“Where Is The Love?” sheds light on issues like terrorism and crime, asking listeners to love and not hate.

It became the highest-selling single in 2003 and reached #8 on the Billboard Hot 100 in the same year.

17. With A Little Help From My Friends – The Beatles

According to this song, friendship is one of the best remedies to life’s problems.

In this hit, the narrator notes that his friends’ support is what’s getting him through his rough patch.

Ready for a feel-good tune? Check out our best songs about friendship playlist, which also features this song.

“You’ve Got A Friend In Me” tells of the friendship between Toy Story characters Andy and Woody.

The soundtrack song quickly became a crowd favorite, charting at #40 on the Canadian Adult Contemporary chart in 1996.

Looking for one of the best Motown songs about helping others? Here’s one!

“I’ll Be There” features a male narrator who tells his ex that he’ll support her even though they aren’t together.

This beloved Jackson 5 song went straight to the top of the Billboard Hot 100 in 1970.

This hit is also on our best karaoke duets of all time playlist, so feel free to check it out!

Its motivational lyrics encourage listeners to chase their dreams in life no matter what.

“You’ve Got A Friend” was originally written by Carole King in 1971.

The soft rock song offers support to a friend in need while assuring them that a friend is always a phone call away.

Want more from Mariah Carey? You’ll find her on our best 90s songs playlist with “Always Be My Baby.”

This particular R&B tune is about a woman who tells her man that she’ll always be his friend.

This special song inspires hope in those who are struggling with suicidal thoughts.

This one made it on our best songs about loneliness playlist. Another R.E.M. hit, “Shiny Happy People,” is also on our list of best happy songs.

If you’re a Nickelback fan, then this song is for you!

“Never Gonna Be Alone” is an alternative rock ballad where the singer vows that he will never leave his loved one.

Sometimes we get a little too comfortable with the people we love and start to take advantage of them.

“Be Kind” reminds us that we need to remember to show kindness to the people closest to us.

This EDM song went #1 in Belgium and the Czech Republic and #3 on the U.S. Dance/Mix Show Airplay chart in 2020.

Another hit from Bill Withers, “Ain’t No Sunshine,” is also featured on our best easy songs to sing playlist.

“Lean On Me” is all about being the best solution you can be to the many problems people have in life.

This soulful tune is ranked #208 on Rolling Stone magazine’s list of The 500 Greatest Songs of All Time.

7. Stand By You – Rachel Platten

“Stand By You” is an inspirational pop song that quickly rose to fame in 2015.

The lyrics describe Platten’s devotion to her loved ones, assuring them that she’s there for them.

This rock song is an excellent song to listen to when you’ve lost a loved one.

It reinforces the idea that every life matters and that we should appreciate and love one another.

“One More Light” peaked at #6 on the Billboard Hot Rock & Alternative Songs chart in 2017.

If you’re looking for another great Avicii song, check out “Wake Me Up” on our best songs to wake up to playlist.

“Hey Brother” is a folktronica tune in which a man tells his loved ones that he’d do anything for them.

Rihanna is best known for her party anthems, like “We Found Love,” which you’ll find on our best party songs playlist.

In “Umbrella,” Rihanna tells her man that he always has her love and support, no matter what.

The song won a Grammy Award for Best Rap/Sung Collaboration in 2008.

You’ll come across more Coldplay songs on our playlists, including “The Scientist,” which you can listen to on our best karaoke songs playlist.

This brit-pop/alt-rock song shares what it feels like to try to fix another person’s, broken heart.

The lyrics in “Count On Me” reassure a friend that the singer will always be a reliable ally to them.

In this song, Kygo and Henderson declare their devotion to each other, even when everyone else leaves.

Kygo also released another tropical house tune, “Firestone,” a massive international hit song worthy of a place among the best songs of all time.

We hope these songs about helping others and being supportive have sparked compassion in your heart.

Life is hard, but music makes it a little more bearable, so share this playlist with someone today and be a light in their life!

What’s the best song about helping others, in your opinion? Leave a comment below.