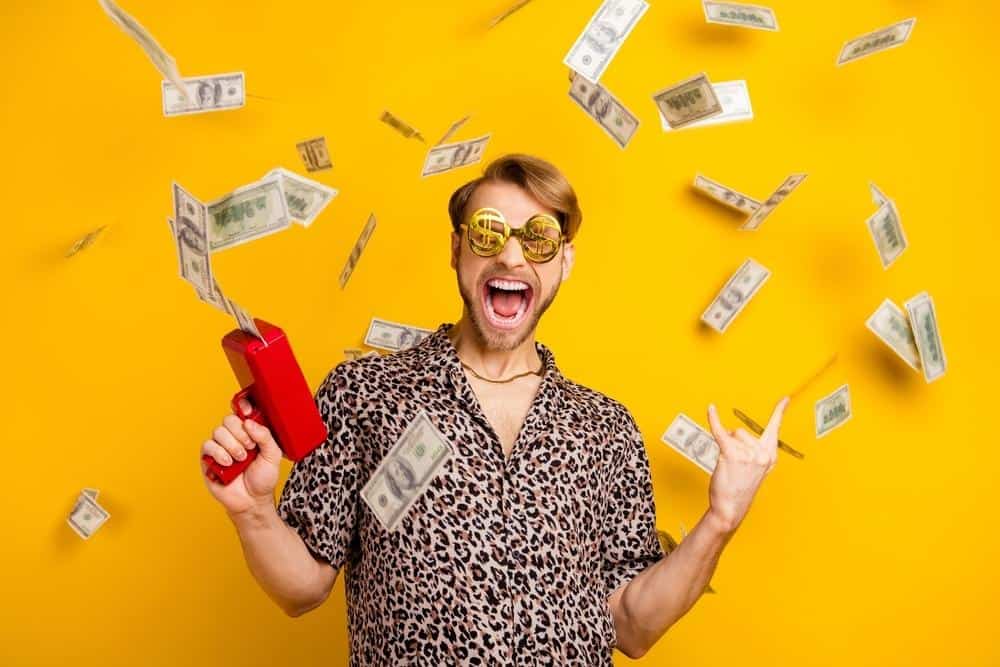 Songs about money are everywhere, so you won’t have to look too far.

Whether the song is about making more money, losing all your money, or even giving it away, money is a common theme in music.

In this article, we’re showcasing songs about the big bucks, so you’re in the right spot to discover the best songs about money, from old-time classics to new releases.

The Best Songs About Money

Our team has hand-picked what we think are the best songs about money, covering everything from spending it like a boss to losing it all.

Here’s our playlist of the 27 best songs about money:

The “No Money” lyrics describe a person’s (or kid’s) courage to finally face their bullies.

The tune from 2016 hit #1 in Norway and made the top 10 in countries like Sweden, Ireland, the United Kingdom, and Australia.

You’ll love “A Milli” by Lil Wayne if you’re a hip-hop fan.

It came out in 2007 with the lyrics solely focusing on having a million dollars and being unstoppable because of it.

The song won a Grammy Award for Best Rap Solo Performance in 2009, while Rolling Stone ranked it the 10th best song of 2008.

Here’s a hip-hop/pop song with a unique twist. In this song, the guy raps about his sexual skill, fame, and fortune, while the girl sings about how she has his money.

This famous Gwen Stefani song features reggae mixed with pop and makes our list of the best karaoke duets of all time.

“Rich Girl” is all about Stefani’s dreams of fame and wealth when she was a kid.

Destiny’s Child made our list of the best karaoke songs of all time, and they’re back for the best money songs, too!

“Bills, Bills, Bills” is about a man who always relies on his girlfriend to pay for everything, and frankly, they’re sick of it.

22. Take The Money And Run – The Steve Miller Band

Rock fans are sure to enjoy this old-school tune about how money makes you do crazy things.

This 1976 colossal hit tells the story of a young couple who robbed a bank, killed a man, and lived life on the run.

The song title’s acronym stands for “Cash Rules Everything Around Me,” focusing on chasing the dollar bill.

“Money On My Mind” is more than just an intriguing money song. It’s also one of the best songs to wake up to, in our opinion!

It tells the tale of an aspiring musician becoming an artist for all the wrong reasons, like focusing on material possessions.

The song took #1 on the UK official charts and #4 on the Ireland Singles Chart in 2014.

19. She Works Hard For The Money – Donna Summer

This disco hit is for all the industrious ladies out there making money.

“She Works Hard For The Money” shares the story of a hard-working woman who is working at a blue-collar job to make ends meet.

The original song was written by Tom Gray of The Brains but was re-recorded by Cyndi Lauper. She also makes our list for best prom songs with “True Colors.”

“Money Changes Everything” is sung from the perspective of a girl who breaks up with her man and chases after one who is more affluent.

Overall, the song performed well, charting in the top 100 across seven countries and peaking at the 27th spot on the Billboard Hot 100.

“Billionaire” is a reggae/pop-rap song from 2010 all about spending money if you had more of it.

The lyrics talk about what a guy would buy if he became a billionaire.

“Got Money” focuses on celebrating wealth and riches (if you are lucky enough to have them).

15. It’s All About The Benjamins – Puff Daddy & The Family

“It’s All About The Benjamins” is one of the most popular money songs from 1997, featuring The Notorious B.I.G., Lil’ Kim, and The LOX.

Puff Daddy and the gang sing and rap about one thing: getting that cold hard cash.

Kenny Loggins wrote this folk rock hit in 1971 for his brother Danny in honor of his son’s birth.

This beloved song talks about not having enough money but having plenty of ambition and hope for the future.

“Danny’s Song” was so popular that it received a ton of radio time on rock and adult contemporary stations back in the day.

Famous and wealthy men have to watch out for conniving women that only want one thing.

The song tells of a girl who only gets with a guy because he has money (otherwise known as a “gold digger”).

Upon release in 2005, “Gold Digger” broke the record for most digital downloads in a week, exceeding 80,000.

If you’re a gal who appreciates the finer things in life, then this may be a good song for you.

“Material Girl” is all about a woman with expensive taste manipulating men to get their money.

The dance-pop song hit #3 on the UK charts and ranked within the top 10 across Europe in 1985.

This soul/soft rock song was released in 1977 and earned plenty of success while making good money in the process. Hall and Oates are also known for writing some of the best happy songs of all time!

“Rich Girl,” tells the tale of a spoiled girl whose parents pay for anything she wants, and if she gets in trouble, they’ll always bail her out.

The song earned the 23rd biggest hit of the year from Billboard in 1977 and was their first of six number-one singles on the Billboard Hot 100.

You’ll love this AC/DC hit if you’re a hard rock fan. The band also makes our list of the best party songs with “You Shook Me All Night Long.”

Rather than talking about becoming a million dollar man, this band concentrates on destroying wealth, claiming it’s what divides people most.

This Pet Shop Boys money hit is a synth-pop tribute to all the opportunities money can bring a person (if they have the right business partner).

The singer addresses the listener satirical, asking them to go into business with him because he “has the brains” and they’ve “got the looks.”

However, after the song appeared in a 2021 Super Bowl advertisement, it skyrocketed to #1 on Billboard’s Dance/Electronic Digital chart.

This legendary pop-rock hit centers around money. It also features a chorus intro instead of a verse, unique in 1964.

The Beatles tune has profound yet straightforward lyrics that state that money can’t buy anyone true love.

“Can’t Buy Me Love” was the fourth highest-selling single in the UK during the 60s. It also topped charts in multiple countries, from the U.S. and Australia to New Zealand and Sweden.

This track is one of the more soulful songs on this list focusing on man’s money, stemming from the Bible verse 1 Timothy 6:10.

The song warns about the evil side of wealth. The lyrics point out all the terrible things people will do for a good payday, from cheating and lying to stealing and murder.

“For The Love of Money” has been inducted into the Grammy Hall of Fame. It also hit #3 on the Billboard R&B charts and #9 on the Pop Singles chart in 1974.

6. Money (That’s What I Want) – The Flying Lizards

If you’re looking to ride the new wave, we’ve got the perfect song for you!

Besides the Flying Lizards, numerous bands covered this famous track, including The Beatles.

It’s a lighthearted song that discusses the love of money and turned the saying, “the best things in life are free,” upside down.

Instead of focusing on all the fantastic things money can buy, Pink Floyd’s progressive rock song criticizes materialism and all the terrible things it brings.

4. Money For Nothing – Dire Straits

Fun fact: this pop-rock hit by the English rock band Dire Straits also features Sting on background vocals, who you’ll also find on our list of the best easy songs to sing.

“Money For Nothing” was inspired by a deliveryman at an appliance store who commented on music videos on MTV, saying “that ain’t working.”

The song’s lyrics focus on how some people think those in the music industry have it easy.

The Dire Straits hit won Best Rock Performance by a Duo or Group with Vocal at the 28th Grammy Awards and is one of the best songs of all time in our opinion.

The lyrics talk about how money and success ultimately lead to problems because people will start to envy you and try to pull you down.

The songs charted #1 on the Billboard Hot 100 for two weeks straight and hit #6 on the UK charts in 1997. Today, it’s known as one of the most popular songs in hip-hop.

This 1976 baroque pop song is from Swedish pop band ABBA and appears in Mamma Mia’s famous musical! ABBA also makes our list of the best sweet 16 songs with “Dancing Queen.”

The song features a hard-working female character who can’t seem to get out of debt. Through her life in poverty, she hatches a plan to find a rich man, thinking that’s the only way to make it in life.

This song comes from 50 Cent’s third studio album, “Curtis,” and is considered the standout track above all others.

The meaning is quite simple; he’s talking about the luxuries of living in a rich man’s world (50 being the rich man).

Well, there you go! Our picks for the best songs about money.

Everyone can enjoy the almighty dollar, whether you’re filthy rich or dirt poor. Hopefully, this playlist motivates you to work harder, give frequently, and appreciate your finances, friends, and family.

What are the best songs about money, in your opinion? Leave a comment below.

The 100 Best Karaoke Songs of All Time