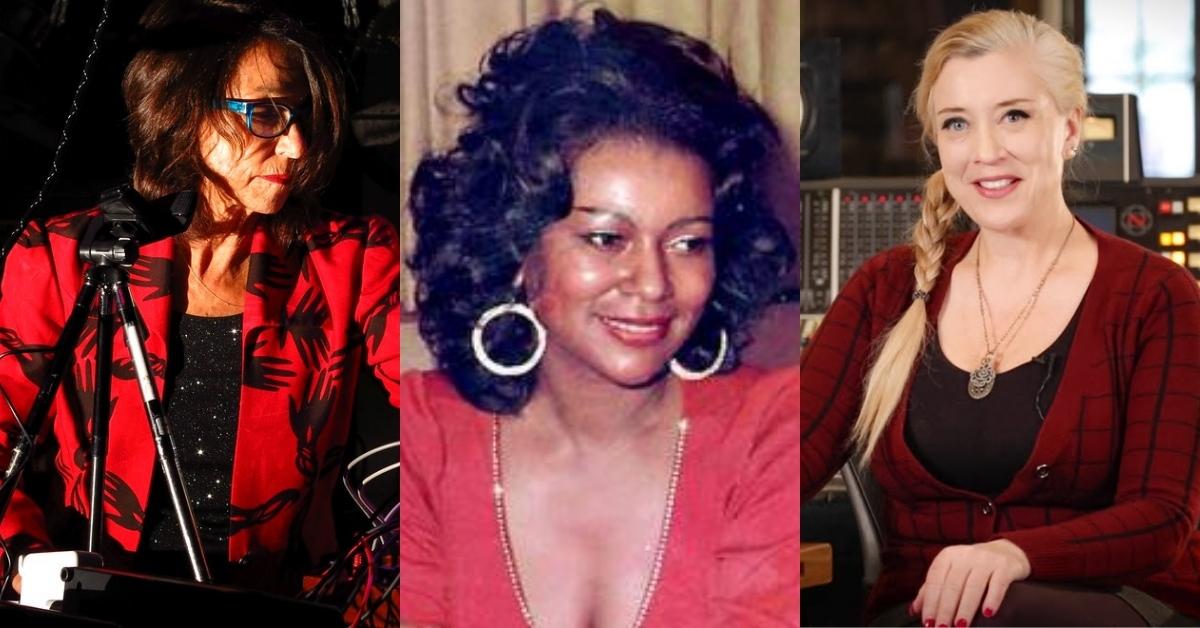 Although music production has historically been a male-dominated field, there are still many talented female producers who have made a name for themselves.

Sadly, it’s still rare to see women working as producers, but thankfully, the girls on this list are pioneering a new frontier, paving the way for the next generation.

The 10 Best Female Music Producers of All Time

After watching and listening to lots of female producers, we’re spotlighting ten skilled ladies who deserve all the applause for a job well done.

Here’s our list of the 10 best female music producers of all time:

Ebony Naomi Oshunrinde (a.k.a Wondagurl) is a Canadian songwriter and record producer who is among the youngest female music producers in the music industry to work on a platinum-selling hip hop album.

At only nine years old, Oshunrinde started to produce music on her keyboard and drum pads. When she turned fifteen, she competed in the 2011 and 2012 Battle of The Beat Makers contests in Toronto, where she won first place.

After her big win, she began working with popular record producer and former Battle of The Beat Makers judge, Boi-1da.

This ultimately led to high-profile music placements on Jay-Z’s album, Magna Carta Holy Grail, in 2013 and a working relationship with rapper Travis Scott.

Throughout her career, Oshanrinde has worked with plenty of international artists, including Jay-Z, Mariah Carey, Drake, and Kanye West.

In 2021, she became the first Black Canadian female producer to win the Jack Richardson Producer of the Year Award at the Juno Awards.

Oshanrinde received production credits on Rihanna’s “Bitch Better Have My Money” track, which charted at #3 in France, and “Antidote” by Travis Scott, which reached #16 in the U.S. in 2015.

Jennifer Lee, known as TOKiMONSTA, is one of the best DJs in the world and also happens to be a DJ who has done her fair share of trailblazing work, especially within the dance music genre.

Although she hated piano lessons as a child, they helped Lee succeed in composing once she began producing on one of the best DJ software applications, Ableton.

She competed in various beat battles in L.A., including Project Blowed and Low End Theory, and in 2010, was invited to be part of London’s Red Bull Music Academy.

These competitions led to her being the first woman to sign with Brainfeeder Records and releasing her debut album, Midnight Menu.

In 2019, Lee received a Grammy nomination for Best Electronic/Dance Album, which made her the first Asian American female producer to be considered for the award.

She has also captivated audiences while performing at popular festivals like Coachella and SXSW.

Sylvia Rose Moy was a Detroit-born songwriter and record producer who made a name for herself producing for a variety of famous Motown artists.

Moy studied classical music and jazz in high school and was eventually discovered by Mickey Stevenson and Marvin Gaye while performing at a local club.

Although she scored a recording and songwriting contract, she was encouraged to stay behind the scenes to co-write and help produce due to a lack of material for artists.

Some of the most popular artists she wrote and produced for throughout her career include Stevie Wonder, The Isley Brothers, and Marvin Gaye. In fact, she played a key role in helping Stevie Wonder catch the attention of the historic label Motown Records.

This legendary lady was the first woman to have the title of “record producer” at the Motown label, earning her a prestigious place in music history.

Some of her most famous hits include “Never Had A Dream Come True,” “I Was Made To Love Her,” “Uptight (Everything’s Alright),” and “My Cherie Amour.”

Moy wrote over 180 songs and received six Grammy nominations and 20 BMI Awards. She was also inducted into the Songwriters Hall of Fame in 2006.

Catherine J. Marks is an award-winning Australian producer, mixer, and engineer who has been heavily involved in the music business for the past seventeen years.

She began learning piano at age four, and in 2001, met famous producer Flood at a concert.

In 2005, she served as his assistant engineer, and in 2009, she began working with popular British mixer and producer Alan Moulder.

Throughout her career, Marks has worked with many household names, such as Death Cab for Cutie, Interpol, Blonde Redhead, Killers, Foals, Alanis Morrisette, and Ronnie Vannuci.

She has also produced and mixed multiple Top 10 UK Albums and one #1 Australian album.

She also received a Grammy nomination in 2016 for Best Rock Performance for her work on the Wolf Alice song “Moaning Lisa Smile.”

Sonia Eloise Pottinger was the first Jamaican female music producer who took the music industry by storm between the mid-1960s and 1980s.

Her husband, Lindon Pottinger, became the first black person to own a recording studio when he opened one up in 1961 and started recording local artists.

Among her most famous productions are the 1978 Culture album Harder Than The Rest, The Gaylads’ songs, “It’s Hard To Confess” and “ABC Rocksteady,” and Ken Boothe’s “Lady With The Starlight.”

Linda Perry is an American musician, singer-songwriter, and female music producer who has made her mark on the music industry with two record labels and countless compositions and productions for famous artists.

From an early age, Perry was interested in music. So when she turned twenty-one, she moved to San Francisco to pursue that career path, playing guitar and singing on the streets.

After performing at various clubs and coffeehouses in 1989, she was discovered by Christa Hillhouse of 4 Non Blondes and was recruited to join the band.

This discovery eventually led to a deal with one of the biggest record labels in the world, Interscope Records, and the release of Perry’s own music.

Perry has earned several nominations for the Grammy Awards and Golden Globe Awards and was also inducted into the Songwriters Hall of Fame in 2015.

Esther Renay Dean, more commonly known as Ester Dean, is a singer-songwriter, actress, and one of the world’s greatest female music producers focusing on the most popular music genres, R&B, pop, hip hop, and dance.

At fifteen, she began singing and writing for rappers and producers in Omaha, Nebraska. Then, at age twenty, Dean moved to Atlanta, Georgia, to pursue her music career.

During a concert, Dean caught the attention of music producer Tricky Stewart when he overheard her singing along to a song, which resulted in a publishing deal.

After moving to L.A., she started collaborating with the famous production team, Stargate, writing and producing Top 40 hits for a variety of big-name artists, such as Drake, Selena Gomez, Britney Spears, Rihanna, Florence + The Machine, Kelly Clarkson, Lil Wayne, Usher, and Katy Perry.

Some of Dean’s achievements include seven BMI R&B/Hip-Hop Awards, one Grammy nomination, one MTV Movie Award, and one Annie Award nomination.

Sylvia Lenore Massy is a talented female producer from Michigan, known worldwide for her versatile production, mixing, and engineering skills.

She started out performing in an all-girl alternative punk band, Revolver, in the 1980s. The group self-produced their own music, which caught the attention of other local bands who wanted Massy’s help.

After working with a variety of bands like Sea Hags, The Adolescents, and Exodus, she moved to L.A. to pursue a music career.

Within two years, she was connected with famous producer Rick Rubin and was working with popular artists like System of a Down, Red Hot Chili Peppers, Prince, Paula Abdul, Seal, Aerosmith, and one of the top country singers with deep voices, Johnny Cash.

Massy’s music production prowess led to several international hits, including Spiderbait’s “Black Betty,” which reached #1 in Australia, and Seigmen’s “Metropolis,” which made it to #4 in Norway.

Commonly referred to as “America’s first female synth hero,” Suzanne Ciani is one of the greatest female music producers focusing on new age and electronic music and sound effects.

Ciani began playing the piano at age six. As a young adult, she received classical music training at Wellesley College and was introduced to the production world through her MIT evening classes.

After graduating with a master’s degree in composition from the University of California, Berkeley, she began a working and romantic relationship with synthesizer inventor Don Buchla.

Ciani won a Bronze Lion at the Cannes Lions International Festival of Creativity, a Wellesley College Alumna Achievement Award, and the Most Valuable Synthesizer Player Award from the National Academy of Recording Arts and Sciences.

The female synth hero also has received five Grammy nominations and was the first female to win a Moog Music Innovation Award in 2017.

Sylvia Robinson (born Sylvia Vanderpool) was a world-renowned singer, record label executive, and music producer whose phenomenal creative process led to her being dubbed the “Mother of Hip Hop.”

At fourteen, she started recording music for Columbia Records under the name “Little Sylvia.” In 1954, she partnered with Mickey Baker to form their duo, Mickey & Sylvia, which led to modest success recording for various labels.

In 1972, Robinson embarked on a solo career, which produced two chart-topping R&B hits, including “Love Is Strange” and “Pillow Talk.”

Later, Robinson and her husband founded Sugar Hill Records, which became a hub for many artists during the early to mid-1900s and led to the production of the first commercially successful hip hop songs.

Robinson’s production credits include “Rapper’s Delight” by the Sugarhill Gang and “The Message” by Grandmaster Flash and the Furious Five, which introduced rap music, breakdance, and scratch tracks to the music industry.

Robinson’s incredible production work earned her a Pioneer Award from the Rhythm and Blues Awards in 2000 and a spot in the Rock and Roll Hall of Fame in 2022.

These incredible female producers have worked on some of the world’s greatest hits like “My Cherie Amour,” “Black Betty,” and “Rapper’s Delight.”

Sylvia Robinson takes the #1 spot because of her significant role in making sure hip hop became mainstream.

So, how about a round of applause for these trailblazers? They’ve surely earned it!

Who’s the best female music producer, in your opinion? Leave a comment below.

The 10 Best Musicians of All Time

The 10 Best Female Composers of All Time