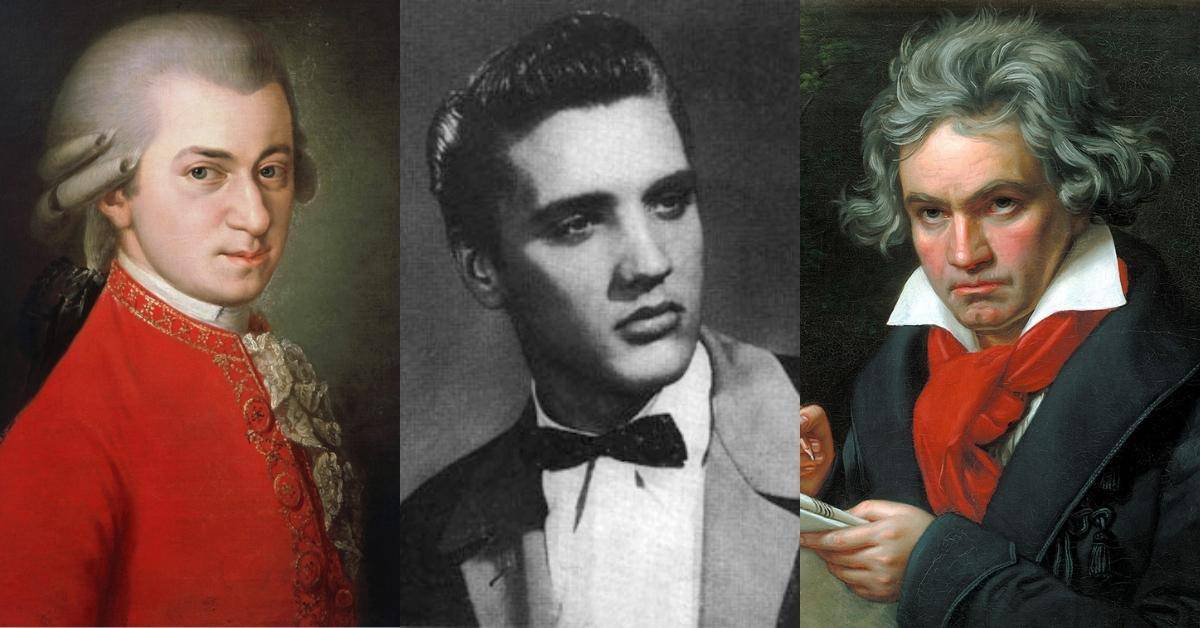 Writing about the best musicians of all time is daunting because the list could be gigantic.

So, to narrow our search, we based our picks on artists’ longevity and their impact on culture and the music industry.

We’ve featured artists, bands, and even composers from the classical era so join us as we learn about these incredible musicians.

The 10 Best Musicians of All Time

For this list, we focused on musicians in western popular music and considered record sales, longevity, genre impact, and social media presence.

Without further ado, here’s our list of the 10 best musicians of all time:

David Robert Jones was born in 1947 in London, but the world would know him as David Bowie.

When Bowie heard Little Richard’s “Tutti Frutti” as a child, he later reported that he “heard God.” And when he heard Elvis’ “Hound Dog,” David danced about, and it planted the seed for some of his later hits.

At college, David studied art, design, and music. During this period, his half-brother introduced him to jazz and forms of spirituality. His brother struggled with schizophrenia, and the topic of mental health permeated Bowie’s lyrics.

The 1969 release of “Space Oddity” put Bowie on the charts as an artist and prolific songwriter. The haunting lyrics and unique sounds created with a mellotron set the stage for his style and theatrics. He also has one of the best songs about monsters, aptly titled “Scary Monsters (And Super Creeps).”

If you’re dubbed the “King of Pop,” chances are you’re also one of the world’s greatest musicians. Michael Jackson began his musical career with the family band, The Jackson 5 and launched his solo career in 1971.

With the release of Off The Wall in 1979, he had a smash hit with “Don’t Stop ‘Till You Get Enough.” Then, in 1982, the album Thriller was released, which turned the entertainment world upside down.

Thriller had mega-hits like “Billie Jean,” “Beat It,” and one of the best 80s songs, “Thriller.” Michael created music videos for the hit songs that helped MTV grow in popularity and increased his popularity and fame.

Jackson also impacted fashion by wearing a white glove and a sequin jacket. And when it came to stage moves, Michael was the best! The “moonwalk” became his signature move, and his stage persona influenced many R&B and hip-hop artists.

Michael Jackson is one of the best-selling music artists of all time whose fashion, dancing, studio albums, and singing continue to inspire future generations of musicians.

Years later, Jones would be replaced by Ronnie Wood, and Bill Wyman handed over the bass role to Darryl Jones.

The band was at the forefront of The British Invasion of 64, which swept the United States like a hurricane. The Stones were influenced by American blues and R&B music that inspired hits like “(I Can’t Get No) Satisfaction,” “Brown Sugar,” and “Honky Tonk Woman.”

Adding to this impressive resume are their Grammy Awards, massive album sales, and an iconic tongue and lips logo known worldwide. Toss in Maroon 5’s hit, “Moves Like Jagger,” and it’s easy to see how Mick Jagger’s stage presence has been inspirational.

Although only three original band members remain, the Stones continue to tour, making them one of the best rock bands of all time.

Another band filled with amazing musicians is Led Zeppelin, which was formed in 1968.

They are one of the most successful bands, filled with influential musicians like Jimmy Page, John Paul Jones, John Bonham, and lead vocalist Robert Plant.

Musically, Zeppelin was a juggernaut of sound and influence. They created the heavy metal genre and drew upon folk music for many songs. Early hits include “Dazed and Confused,” “Communication Breakdown,” and “Ramble On.”

But their untitled fourth album, also known as “Led Zeppelin IV,” is hailed as one of the greatest albums in rock history.

It contains classic songs like “Stairway to Heaven,” which is now one of the top 10 forbidden riffs banned in guitar stores, and “Rock and Roll.” Both songs showcase Jimmy Page’s brilliance on the acoustic guitar and his ability to shred on the electric.

During their heyday in the 70s, Zeppelin was touted as “the biggest band in the world.” They started arena rock and set Guinness world records for concert attendance. But when drummer John Bonham, one of the best drummers of all time, died in 1980, the band called it quits.

Since Bonham’s tragic demise, the members have gone on to solo careers. Robert Plant teamed up with bluegrass sensation Alison Crouse to record a Grammy-award-winning album.

John Paul Jones is a noted record producer, and Jimmy Page formed The Firm in the 80s. All of which are reasons Led Zeppelin is a band of exemplary rock musicians whose studio albums contain great music.

James Marshall Hendrix, better known as Jimi Hendrix, is one of the greatest guitarists ever who turned the music world upside down.

Speaking of upside down, that’s how he played his Fender Stratocaster. He took a right-handed Strat and flipped it to play left-handed.

Hendrix developed his guitar playing during his short stint in the army in 1961. Billy Cox, a fellow serviceman, heard Hendrix practicing and described him as a cross between “John Lee Hooker and Beethoven.” Cox would later become a member of The Jimi Hendrix Experience.

Hendrix had success in Europe with “Hey Joe,” “Purple Haze,” and “The Wind Crys Mary.” But his 1967 performance at the Monterey Pop Festival made him a star in America.

Aside from his amazing performance, he became a rock legend when he lit his guitar on fire. Today, Hendrix is ranked as one of the best guitarists of all time and is equally praised for his songwriting.

His 1968 double album, Electric Ladyland, is considered his best studio album, and when he performed at Woodstock, he was the highest-paid rock musician. Tragically, Hendrix died when he was 27.

The Rock & Roll Hall of Fame describes Hendrix as “Arguably the greatest instrumentalist in the history of rock music.”

Perhaps Robert Allen Zimmerman knew he’d be famous for song lyrics and would need a more straightforward name for fans to remember.

Whatever the reason, he is known worldwide as Bob Dylan and is one of the most influential artists in the world.

Arguably one of the greatest songwriters of all time, his songs have been covered by Neil Young, The Beatles, The White Stripes, and countless others.

As a solo artist, songs from the 60s like “Blowin’ in the Wind” and “The Times They Are a-Changin” dealt with social issues.

A motorcycle accident in 1966 ended his desire to tour, so he focused on songwriting. He recorded with his touring ensemble, The Band, and wrote country and rural-themed songs.

In the late 70s, Dylan became a born-again Christian and a contemporary gospel singer. He released several albums in this genre before returning to his folk-rock roots.

He began touring again in the late 80s, and the schedule was so demanding that it was dubbed the Never Ending Tour.

He’s also been awarded a Pulitzer and a Nobel Prize, making him one of the most decorated artists in music history.

Elvis Presley was born in 1935 in Tupelo, Mississippi, and would later be crowned “King of Rock and Roll.” Elvis recorded his first album at Sun Records in Memphis and popularized African-American music.

Elvis was a trendsetter when it came to live performances. He popularized dance moves, some of which were provocative at the time. Such controversial performances earned him the nickname Elvis-the-Pelvis.

With the success of his hit, “Heartbreak Hotel,” Elvis became the forerunner of the new genre sweeping America: rock and roll music. Such success earned him television and film contracts.

After his time in the Army, Elvis appeared in 60s films like Jailhouse Rock, Blue Hawaii, and Viva Los Vegas. While the films were lackluster, his albums of the same title were critically acclaimed, making Elvis a superstar and an influential musician.

The Beatles, a.k.a. The Fab Four, started in Liverpool, England, in 1960. Members include Paul McCartney, George Harrison, John Lennon, and Ringo Starr.

They are considered one of the best bands of all time, and the songwriting prowess of Lennon and McCartney have crafted timeless pop classics.

The Abbey Road album from 1969 was full of hits like “Come Together,” “Something,” and “Here Comes the Sun” and showcased the brilliance of one of the best music producers of all time,  Sir George Martin.

The band broke up in 1970, and although rumors of reuniting surfaced, the deaths of George Harrison and John Lennon ended further speculation.

When you consider they have one of the best-selling albums of all time, a catalog of great songs, and genre-bending albums, it’s easy to see why they made the list.

Now, let’s head in a different direction and jump back to Austria in 1758 with the birth of Wolfgang Amadeus Mozart.

In his short career and life, Mozart cranked out over 800 compositions, which is why he is regarded as one of the most influential composers of western music.

Mozart was a musical prodigy who, by the age of five, performed on the violin and keyboard. The musical genius also composed at an early age and toured Europe with his family to perform for royalty.

In 1984, a fictionalized film about his life called Amadeus came out, and although many musicologists dismissed it as trite, it nonetheless won eight Academy Awards.

Mozart was a prolific composer, creating masterpieces for symphonies, concertos, and operas. Signature works include “Marriage of Figaro,” “Eine Kleine Nachtmusik,” and Symphony No. 41, “Jupiter,” all of which make Mozart one of the world’s most influential musicians.

While Ludwig van Beethoven arrived on the music scene after Mozart, he was nonetheless championed as one of the greatest composers of all time.

Beethoven was born in Germany in 1770 and was an accomplished pianist and composer. Although his gruff father tried to teach him music, it wasn’t until he moved to Vienna that his music career took off. In Austria, he studied composition with the “Father of the Symphony,” Joseph Haydn.

Perhaps his most famous work is Symphony No. 5, whose tell-tale opening is one of classical music’s most recognizable musical phrases. And in 1984, it became a disco hit as “A Fifth of Beethoven.”

Another noticeable composition is his last symphony, No. 9, which many musicologists hail as a masterpiece. In the final movement, a chorus sings an adaptation of “Ode de Joy” that has become as recognizable as the motif of Symphony No. 5.

Beethoven composed for one of the most popular music genres, and his works are performed annually worldwide.

Additionally, Hollywood has used his music in films like “Die Hard,” “The King’s Speech,” and “Mission Impossible: Rogue Nation” to list a few. Because of all of these attributes, Beethoven is heralded as an influential musician of all time.

We hope you’ve enjoyed perusing our list of the greatest musicians of all time. Each individual was a prolific artist and significantly impacted the music industry and society.

While our list will evolve, these legends will forever impact culture, artists, and musicians.

Who’s the best musician of all time, in your opinion? Leave a comment below.

The 10 Best Guitarists of All Time

The 10 Best Female Music Producers of All Time