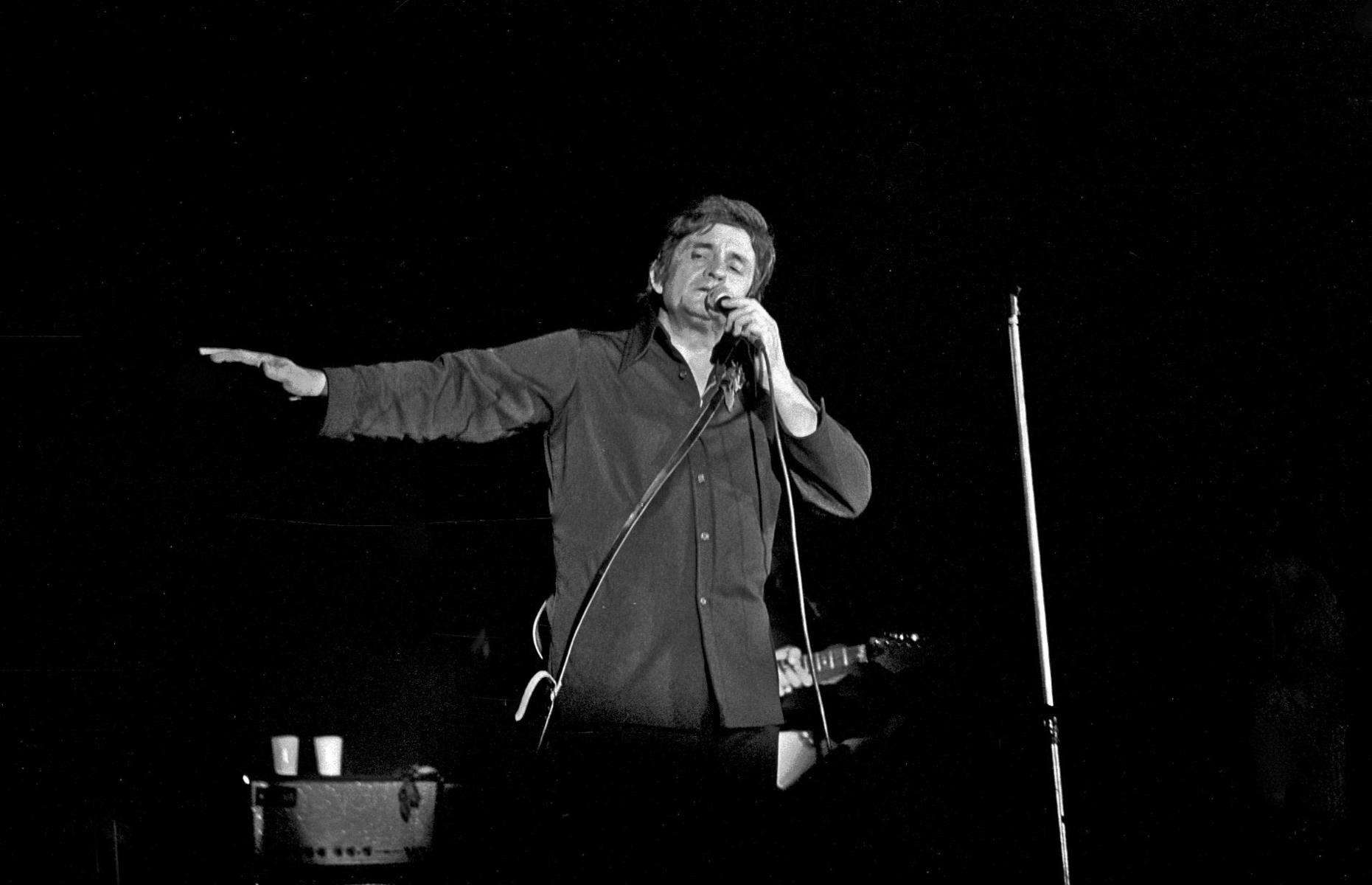 Country singers with deep voices have the power to stop you in your tracks completely, regardless of what you’re doing. Whether you’re at a concert, watching The Voice, or listening to Spotify, deep voice country singers will give you goosebumps without question.

So, whether you’re into country music or not, it’s impossible not to appreciate a musician with a rich, deep voice, and all the country singers on this list have precisely that.

We’ve listened to various artists to find the best country singers with deep voices from the past and present. Whether they were blessed from the get-go or developed their range over time, these musicians lead the pack when it comes to the deepest voices in country music.

Here’s our list of the top 10 country singers with deep voices:

Johnny Cash was born on February 26th, 1932, in Kingsland, Arkansas. His calm, bass-baritone vocals quickly made him a country superstar and one of the most notable singer-songwriters in history.

The “Man in Black” entered the country music scene in the late ’50s and is widely considered one of the best country singers of all time.

His profoundly deep baritone voice not only made him a household name for country fans, but his music also earned him a spot in the Gospel Hall of Fame, Country Music Hall of Fame, and the Rock and Roll Hall of Fame.

He sold close to 90 million records throughout his career, ranking him among the world’s best-selling singers. Some of Cash’s most famous records include “I Walk the Line,” “Ring of Fire,” and his rendition of “Hurt” by Nine Inch Nails (whose video also earned a Grammy).

Johnny Cash made appearances on TV and film, including the popular western, “A Gunfight” and “Murder in Coweta County.” He left this world on September 12, 2003, but will forever be remembered.

Randy Travis’s life began on May 4th, 1959, in Marshville, North Carolina. His traditional country style led to rejection from all major record labels in Nashville, TN, during the early stages of his career; however, with his wife’s help, he finally struck a record deal that changed his life forever.

Randy also reigns in with all the other country legends on this list with his smooth voice and lovable, melodious country music. From the late ’70s, Randy’s deep voice, gospel songs, and neotraditional country sound captured the hearts of country music lovers worldwide.

Randy Travis has 20 studio albums and 16 #1 hits on the Billboard Country Music Charts, proving a stellar music career thus far. His most famous songs include “Forever and Ever, Amen” and “Three Wooden Crosses.”

Along with Johnny Cash, Randy Travis also made his television and film debut. Travis starred on King of the Hill, Touched By an Angel, and made appearances on over 20 films, including The Rainmaker and Black Dog.

In 2013, Travis suffered a stroke that almost took his life. Since then, he’s been working hard in physical therapy and is still releasing music today. He even earned CMT’s Artist of a Lifetime Award in 2021.

Trace Adkins was born in Sarepta, Louisiana, on January 13th, 1962, but his career didn’t begin until 1996 when he released his first single, “There’s a Girl in Texas,” which earned a spot among the Top 20 Billboard Hot Country Singles & Tracks chart.

Trace took the 90’s by storm with his debut album “Dreamin’ Out Loud” and is still one of the best baritone voices today. He’s churned out fantastic songs like “You’re Gonna Miss This” and “Honky Tonk Badonkadonk” and has been steadily dropping hits since.

Trace Adkins has an impeccable singing ability, which has led to 20 singles on the Billboard charts, with three earning the #1 spot. Adkins isn’t slowing down anytime soon after achieving over three decades in a successful solo career.

Another impressive deep voice is that of Josh Turner, a brilliant vocalist, gospel, and country singer. Josh Turner was born on November 20th, 1977, in Hannah, South Carolina.

He started out singing in his church’s gospel quartet, where he sang bass and baritone. However, at age 20, Josh Turner experienced a vocal cord injury that required vocal rehabilitation sessions and classical music singing lessons.

Fortunately, the voice rehabilitation sessions made his deep booming voice even more robust, enabling him to take five of his singles to #1 on the charts. A few of his most popular country songs include “Your Man,” “Long Black Train,” and “Why Don’t We Just Dance.”

Recently in 2019, Josh Turner won his first-ever Dove Award for a cover of Hank Williams Sr.’s “I Saw the Light.” However, in the same year, Turner lost his sound engineer in a tour bus accident in California, which put a strain on his music career.

He was a deep voice country singer from the 70s who learned to play guitar at eight years old and performed on KVOW radio at age 12. Jennings had a problem with mainstream country-pop sounds, and today he’s widely known as a founding father of the “Outlaw Movement.”

Jennings (with the help of his gritty, deep voice) racked up many awards throughout his career, including the Country Music Association’s Male Vocalist of the Year in 1975 and the Nashville Songwriters’ Festival Lifetime Achievement Award in 2007. A few of his solo hits include “I’m a Ramblin’ Man,” I’ve Always Been Crazy,” and “Sweet Dream Woman.”

Waylon Jennings sadly lived a life of heartbreak, pain, and drug addiction, which led to many health problems. He died at age 62 on February 13th, 2002, but his music lives on.

Conway Twitty was born on September 1st, 1933, in Friars Point, Mississippi, but then moved to Helena, Arkansas, at age ten. Here, he began playing country songs with the Phillips County Ramblers.

In the 1950s, Conway Twitty (Harold Lloyd Jenkins) started his solo singing career in the R&B, rock, and pop genres. However, before that, he received an offer to play for the Philadelphia Phillies professional baseball team but couldn’t due to being drafted for the army.

Later on, in the 70s, Twitty switched up his solo career to country pop music and serenaded millions of adoring fans. He quickly made a name for himself in one of the most popular music genres of all time with his sultry love songs, singing popular ballads like “I’d Love to Lay You Down” and “Hello Darling.”

Twitty performed award-winning duets with country music star Loretta Lynn and had 55 tracks go #1 on the Billboard charts. He sold over 50 million studio albums, earned four consecutive Country Music Association Awards for Vocal Duo of the year, and received a 1999 induction into the Country Music Hall of Fame, among other accolades.

On June 5th, 1993, Twitty passed away at age 59 but is still cherished by his loving fans.

Merle Haggard came into the world on April 6th, 1937, in Oildale, California. At age 9, Merle’s father died, which spiraled him into a season of rebellious behavior and trouble.

He is one of the older male country singers with deep voices, but his bad-boy past and real-life experiences are what set him apart from the 60s to 2000s. He served a sentence at San Quentin State Prison in California from 1958 until 1960, where he witnessed an inspiring Johnny Cash performance that changed his life.

After being released from prison, Haggard decided to use his deep baritone voice to launch a country music career and achieve a commercial breakthrough. Haggard sang his own songs, played guitar, and even played the fiddle. He also performed memorable duets with his fellow country artists, including George Jones and Willie Nelson.

This criminal-turned-celebrity tops Rolling Stone’s 100 Greatest Country Artists of All Time list, had 38 singles ranked #1 on the U.S. Country charts, and earned countless awards from Entertainer of the Year 1970 to the Nashville Songwriters Hall of Fame award in 1977.

Haggard died on April 6th, 2016, at age 79 from pneumonia, but he goes down in history as one of the best country singers to have ever lived.

Chris Stapleton was born on April 15th, 1978, in Lexington, Kentucky.

He became a singer-songwriter, guitarist, and record producer who studied sound engineering (one of the best day jobs for musicians) at Vanderbilt University.

In 2015, he released his debut album “Traveller,” which skyrocketed him to fame. Since then, he’s been writing, performing, and recording studio albums filled with hits.

Stapleton received Album of the Year, Male Vocalist of the Year, Song of the Year, and Single of the Year at the 2021 CMA Awards. He’s currently on his “All-American Road Show” tour, sharing his songs with fans across the U.S.

His career took off after he won the tenth season of American Idol in 2011 at age 16, making him the youngest singer on this list. So far, McCreery’s country music career has been a massive success, with his debut studio album, “Clear as Day,” becoming platinum-certified in October 2011.

He released his song, “Five More Minutes,” in 2017 on his own after discovering that he had lost his record deal in 2016. This leap of faith proved worth it, as the song made #6 on the Billboard Country Digital Sales Chart, and Scotty became the first country artist ever to chart a song without a record label.

McCreery released his latest studio album titled “Same Truck” in 2021 and is actively touring throughout the United States.

Don Williams entered this world on May 27th, 1939, in Floydada, Texas.

Williams, known as the “Gentle Giant,” is someone many country singers aspire to sound like. His deep baritone voice made him one of the best-selling artists in country music worldwide, with all his albums receiving almost instantaneous radio play.

Don started out playing in country, folk, and rock bands growing up and eventually found some success in the 60s with the Pozo-Seco Singers. After breaking up in 1969, Williams ventured to Nashville to pursue a career in music, where he’d release over 35 studio albums and become one of the best deep voice country singers in the industry.

Don Williams passed away from emphysema on September 8th, 2017, but leaves a legacy his fans and other country musicians can’t deny.

We hope you’ve enjoyed our list of the best country singers with deep voices.

All these artists have given life to the world’s best country songs and heartbreak anthems. So, the next time you’re looking for a country sing-along chorus, turn on a little Johnny Cash, Alan Jackson, or Conway Twitty, and you’re bound to find the tune to fit your mood.

Who’s your favorite country singer with a deep voice? Leave a comment below.

The 10 Best DJ Movies & Documentaries Ever Made