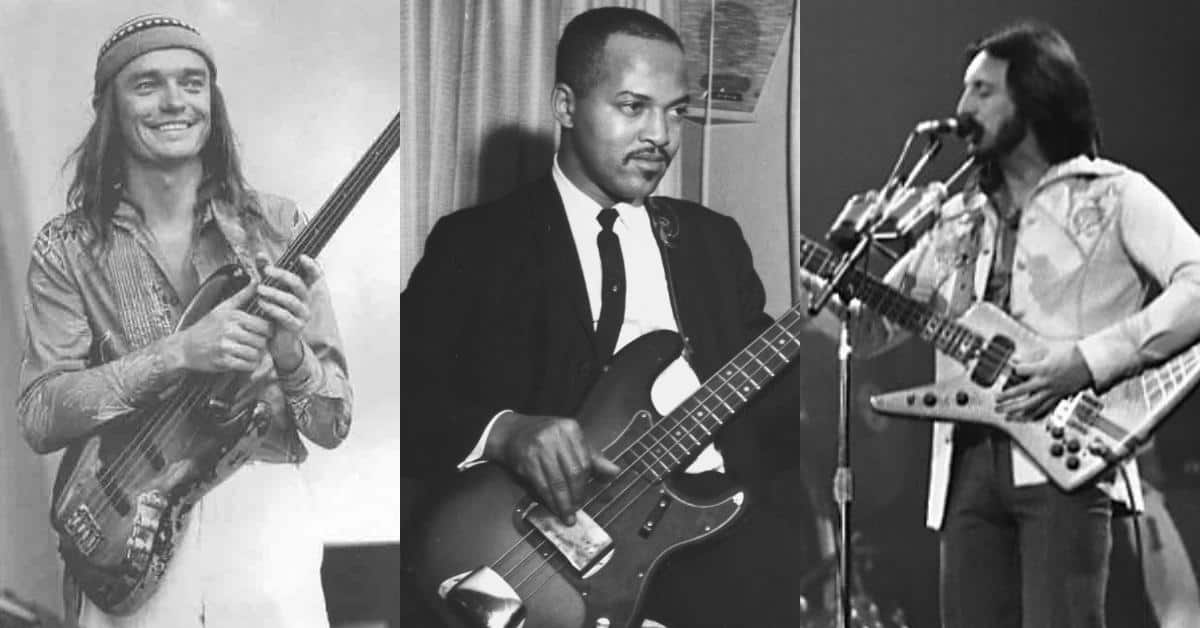 While most people can’t point out who the bassist is at a live show, a bass player is essential for providing groove, harmony, and rhythm.

In this article, we’re diving into the deep end of the music spectrum to discover the best bassists of all time.

Some are in the Rock & Roll Hall of Fame. Some you’ve never seen perform but have heard. And several may be new to you.

Join us as we explore the purveyors of the bottom end.

The 10 Best Bassists of All Time

To construct our list, we based our choices on revolutionary bass players who significantly impacted the music industry from the pop, rock, jazz, and R&B genres.

Here’s our list of the 10 best bassists of all time:

Chris Squire, nicknamed the “Fish,” was the bass player for the progressive rock band Yes.

Squire met Jon Anderson in 1967, and the two hit it off, harmonizing vocals and sharing similar musical interests. Over time, they added other musicians to form Yes.

It would be their fourth release, Fragile before they’d have significant chart success. So when “Roundabout” hit the airwaves, bassists worldwide sat up and took notice.

Squire had a unique tone and was a prolific player, sometimes incorporating the melody into his bass line. He also used techniques on his bass guitar, like hammer-ons and pull-offs, to create fascinating bass lines.

Chris Squire was a bass pioneer who paved the way for others like Billy Sheehan, Les Claypool, and countless others. The Rickenbacker bass became synonymous with Squire.

Lee got his nickname Geddy as a boy when his mother called him in for dinner. Her thick Eastern European accent made “Gary” sound more like “Geddy,” and the name stuck.

Geddy Lee was inspired by Chris Squire and the music of Cream and Led Zeppelin. As a result, Geddy’s bass tone and technical ability are similar to Chris Squire’s. But instead of playing with a pick, Geddy uses his fingers, adding warmth to his tone.

Like Squire, he splits his bass signal into two paths. One handles the low end, and the other tackles the upper range that he can distort. The combination is nothing short of stellar.

Add to this that Geddy sings while playing bass, and it’s easy to see why he’s one of the great rock bassists.

Most music lovers don’t know who John Paul Jones is unless you’re a bassist. As a result, some would mistakenly confuse him with the naval commander from the Revolutionary War.

But if we told you he was the bassist for Led Zeppelin, your eyes would widen with wonder. While Jones was overshadowed in Zeppelin by Robert Plant, John Bonham, and one of the best guitarists of all time, Jimmy Page, he contributed more to the band’s sound than most imagined.

His diverse music training helped create the odd meter in “Black Dog.” As a keyboardist, he assisted with tunes like “Kashmir” and “Stairway to Heaven.”

John Paul Jones crafted one of the most melodic bass lines in “Ramble On,” which many hail as one of the best bass songs of the era.

Jones was influenced by Motown bassist James Jamerson and soul man James Brown. And if you listen closely to the chorus of “Ramble On,” these influences shine through.

John Paul Jones played a Fender Jazz and used his fingers, although for gritty songs like “Black Dog,” he used a pick. Today, Jones has a solo career, produces, and is considered one of the most influential bassists of his era.

But the saying “Those that can’t play, teach” doesn’t apply to Ron Carter. He is credited with recording over 2,000 sessions on double bass, making him the top-recorded jazz musician in the world.

It would be easier to list the jazz musicians he hasn’t played with than those he has. Some musicians of note are Miles Davis, Herbie Hancock, Freddie Hubbard, and The Modern Jazz Quartet, to name a few.

Ron Carter has also fronted his own ensemble, written books, and even won Grammys. He has even performed with the alternative hip-hop group A Tribe Called Quest.

Carter earned an honorary doctorate from Berklee College of Music, taught at Julliard, and is a Professor at City College of New York.

Larry Graham grew up in a musical family and played bass in his mother’s band. When she let the drummer go, Graham filled in the missing kick drum and snare with a slap bass technique.

While slapping the acoustic bass can be credited to William Johnson in 1872, Larry Graham pioneered the technique for electric bass. As a result, you can hear the percussive pops on Sly and the Family Stone’s hit “Thank You (Falettinme Be Mice Elf Agin).”

Slapping is when the bassist uses his right thumb to hit a low note, followed by his index finger plucking a high note. The released metal string slaps the frets and creates a percussive effect.

Bass players influenced by this technique include Bootsy Collins, Marcus Miller, Flea, and Victor Wooten, to name a few.

Larry Graham played on all of Sly & The Family Stone’s hits. The band’s song “It’s A Family Affair” is considered one of the best songs about family and is one of their all-time greatest hits.

Many bassists consider Larry Graham the Father of Funk because of his slap style and funky bass lines.

We bet non-bassists are scratching their heads at this name. “Did Carol Kaye play with the Go-Gos?” Nope.

While you’ve never seen her perform live, the songs she’s recorded read like a “who’s who” of one of the most popular music genres, pop.

Carol Kaye started as a guitarist and taught music in Los Angeles during the 60s. She networked in the music scene, and when a bassist didn’t show up for a session, she jumped at the opportunity.

What followed was a 50-year career where she performed as a bass guitarist on over 10,000 recordings, rightfully earning a spot among the best female bass players of all time. No wonder she’s dubbed the “First Lady” of bass.

We obviously can’t list all her sessions, but here are some notable hits. “The Beat Goes On,” “You’ve Lost That Loving Feeling,” and “La Bamba.”

We believe her bass line for the Beach Boy’s “Good Vibrations” is why it’s one of the best songs of all time. While Brian Wilson came up with her bass line, her bass playing in the upper register made it come alive.

Carol Kaye played most of her hits on a Fender Precision bass. She preferred flat-wound strings and used a pick.

In 2020, he was the wealthiest musician in the world and is considered one of the best musicians of all time, but these titles tell us nothing about him as a bassist.

Paul’s bass of choice in the early years with the Beatles was the Hofner bass. He played a left-handed model and used a pick but occasionally played with his fingers. Today, many bassists refer to the Hofner as the “Beatle bass.”

With the warm tone of his Hofner bass guitar, McCartney drew upon his music heroes like James Jamerson to create melodic bass lines.

His work on “Something” demonstrates how he weaves a bass line around the chord’s root. “Come Together” showcases his sliding bass line that becomes the hook of the verse.

McCartney has dealt with many of the biggest record labels in the world as a Beatle and solo artist. Paul McCartney is also a prolific songwriter, and his hit “Yesterday” is one of the most covered songs in music history.

In 1976, one name swept through the bass world like a Texas prairie fire: Jaco. Rumor was that this unknown Florida kid had pulled the frets out of his Fender Jazz bass and released a mind-boggling solo album.

The album was Jaco Pastorious, and every track confirmed such claims. His bass sound was otherworldly, and his technique was flawless.

The first track featured Jaco accompanied only by a conga as he played Charlie Parker’s bebop standard “Donna Lee.” And “Portrait of Tracy” was a master clinic on the use of harmonics that most bassists never knew existed.

Jaco Pastorius became the bassist for the jazz-fusion band Weather Report. On their Heavy Weather album, Jaco was in his prime. “Teen Town” is his magnum opus, and he soared on “Birdland.” He used artificial harmonics for the intro melody and played a deep groove for the chorus.

Although his life had a tragic ending, Jaco was a significant force in the music industry.

The Who was a powerhouse band from the 60s and 70s. If you’ve ever watched one of their live concerts, everyone is moving, jumping, or hitting something. Only one person is statuesque on stage, the bassist, John Entwistle.

John Entwistle earned the nickname Ox for his unmovable stage presence and persona. He was also called Thunderfingers for his playing style and for being incredibly loud.

On one tour with The Tour, he had so many amps on stage the band nicknamed them Little Manhattan.

John Entwistle played a Fender Jazz bass on “My Generation” and used other basses throughout his career. These include Alembic, Warwick, and Status Graphite. He also used round wound strings to help get an aggressive tone.

Aside from sheer volume, Entwistle incorporated a right-hand technique that enabled his notes to cut through the mix. Because he had large fingers, he could strike the strings with a slight pull to create accented tones.

Additionally, John Entwistle was a master at creating moving bass lines that were melodically and rhythmically interesting. An excellent example is their hit, “Won’t Get Fooled Again.”

Like Carol Kaye, James Jamerson was a session bassist. Specifically, he established the Motown sound and is the bassist by which all others are judged. But how did he earn this reputation?

Jamerson is credited with playing with the Motown greats, many of whom are some of the best black female singers of all time. These include The Supremes, The Temptations, Gladys Night and the Pips, and Marvin Gaye. And that’s just the tip of the iceberg.

Jamerson began on the acoustic bass but found his meal ticket with the electric bass. For most of his Motown recordings, he used a Fender Precision bass called “The Funk Machine.”

He used flat-wound strings that he never changed. This combination created his trademark boomy-bottom end.

James could create melodic and funky bass lines that gave Motown its distinct sound. A great example is his work on Gladys Knight’s version of “I Heard it Through the Grapevine.” In this example, his bass line is funky, percussive, spatial, and so good!

Jamerson could easily be called the “Father of Modern Bass” because of all the musicians he influenced as a bass player.

That does it for our stroll through the world of bass. While we only touched on a few greats from several genres, we hope you’re better aware of some of the best bassists of all time.

Some fronted world-famous bands, while others provided bass lines to the songs we all know and love. And if you’re a bassist, we hope our list will help you strive to be a better bass player.

Who’s the best bassist of all time, in your opinion? Leave a comment below.

The 10 Best Drummers of All Time

The 10 Best Guitarists of All Time