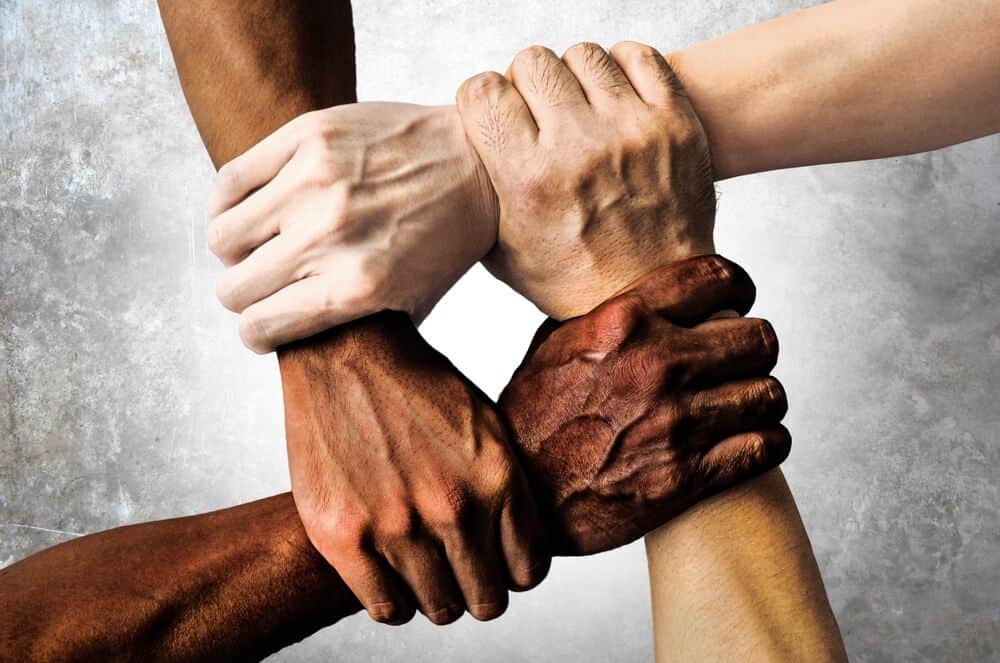 Countless musicians have written songs about unity and togetherness that have inspired us to come together.

Rather than fight against one another, these tunes encourage us all to become better citizens and be kinder to people who may not look, act, or live as we do.

Whether it’s racism, marginalization, poverty, or another dividing factor, one of the greatest medicines will always be music!

The 23 Best Songs About Unity And Togetherness

We can achieve so much more as a society when we unite against challenges and the status quo; thankfully, music has a unique way of banding us together.

So without further ado, here’s our playlist of the 23 best songs about unity and togetherness:

English rock band Free released this feel-good song (which only took around ten minutes to write) from their third album, Fire and Water, in 1970.

“All Right Now” features an upbeat tempo and a message of positivity, motivating listeners to remain optimistic and enjoy their lives.

The track reached #4 on the Billboard Hot 100 and #2 on the UK Singles Chart in the same year it was released.

“Get Along” is one of country singer Kenny Chesney’s greatest hits, released in 2018 from his album, Songs for the Saints.

The song encourages people to find common ground with others, focus on the good, forget the bad, and live peacefully.

“Get Along” earned the top spot on the Billboard Canada Country chart and U.S. Billboard Country Airplay chart while also securing the #2 position on the Hot Country Songs chart in 2018.

If you’re a fan of indie music, you’ll quickly become a fan of this song from 1990 by the British band, The Farm.

“All Together Now” is an inspiring tune focusing on unity and humanity and was written about the Christmas truce of 1914 when German and English troops came together to play a game of football.

Queen is among the best bands of all time, and their hit, “One Vision,” is one of their most prolific songs about unity, written by drummer Roger Taylor in 1986.

The song’s message consists of themes and allusions to Martin Luther King Jr.’s “I Have a Dream” speech from 1963, focusing on racial harmony and hopes for a better tomorrow.

This was the song that broke The Stone Roses’ silence after twenty years of not releasing music.

The lyrics to “All For One” celebrates the band’s friendship and unique band and how they each felt like they were part of one happy family.

18. If You Tolerate This, Your Children Will Be Next – Manic Street Preachers

If you’re more into alternative rock, we think you’ll enjoy this Manic Street Preachers hit, the band’s only song that charted in the U.S.

The song’s title came from a republican propaganda poster from the late 1990s. It was inspired by the Spanish Civil War and how people volunteered to serve in the International Brigade Franco’s fascist army.

Although many believe “People Got To Be Free” was written as a response to the murders of Martin Luther King Jr. and Robert F. Kennedy, it was actually inspired by the time a group of rednecks threatened the band.

Popular artists like Dionne Warwick and The 5th Dimension also recorded versions of this classic.

If you’re searching for something to dance to, The Black Eyed Peas have got you covered with their pop groove, “I Gotta Feeling.”

The song encourages people to join together, party, and have a good time enjoying each other’s company.

The dance-pop hit was the longest-running #1 single of 2009 and was nominated for a Grammy Award in 2010.

This charity single was written by Michael Jackson and Lionel Richie.

The song was dedicated to raising awareness about famine in Africa and speaks of human beings uniting to fight for the cause.

“We Are The World” is the eighth highest-selling physical single of all time, selling over 20 million units, and charted #1 worldwide.

14. People Get Ready – The Impressions

“People Get Ready” is one of the most soulful songs about trust.

The Impressions released this track in 1965, and many believe it’s about finding deliverance and peace from life’s troubles through faith in God.

In 1998, “People Get Ready” was inducted into the Grammy Hall of Fame, and in 2015, it was selected to be preserved in the National Recording Registry.

In addition, many popular singers released their own versions, including Bob Dylan, Bob Marley, and the Wailers, and Rod Stewart.

Marshmello is one of the best DJs in the world who has earned worldwide fame for his intriguing danceable beats.

The EDM artist’s song, “Together,” is an anthem of unity, reminding listeners that despite our different cultures, we’re all in this life together.

This track comes from Marshemello’s second studio album, Joytime II, which charted #1 on the Billboard Top Dance/Electronic Albums chart and made it to #21 on the Independent Albums chart in 2018.

Cuban-American rapper Pitbull released this pop hit in 2014 to serve as the official anthem for the FIFA World Cup held in Brazil.

“We Are One (Ole Ola)” encourages listeners to set aside their differences, unite, and be proud of where they’re from while realizing that we’re all human beings with beautiful differences.

The song reached #1 in Belgium and Hungary and charted within the top twenty in multiple countries, including France, Austria, Brazil, and Italy, in 2014.

“We Are Family” is one of the best songs about unity because it’s all about the importance of family, being together, and celebrating love.

The lyrics were inspired by the sweet connection between the Sledge sisters (who actually were sisters in real life).

The signature Sister Sledge song was America’s #1 R&B song in 1979. It was also selected for preservation in the National Recording Registry in 2017 due to its cultural, historical, and artistic significance.

K’naan’s second album, Troubadour, features this reggae-infused tune about forgetting our world problems and concentrating on unity and togetherness.

“Wavin’ Flag” became a worldwide hit after being selected as the anthem for the 2010 FIFA World Cup in South Africa.

The single charted at #2 on the Canadian Hot 100, and in 2010, after a 7.0 earthquake-ravaged Haiti, Young Artists For Haiti joined voices on a remake of the song to raise funds for the Haitian people.

“Black Of White” ranks among the best 90s songs of all time due to its epic infusion of pop, rock, dance, and hip-hop.

The tune focuses on the theme of racial harmony and looking past our differences to see each person for who they are inside.

This unique track received the first-ever Billboard #1 World Single in 1991, charted #1 in twenty countries, and was the best-selling single in the world in 1992.

“U.N.I.T.Y.” confronted different societal issues, from domestic violence to disrespecting women. The lyrics encourage black women to maintain their dignity and not accept abuse from men.

In 1995, the song earned Latifah a Grammy Award for Best Rap Solo Performance. Between 1993 and 1994, it peaked at #7 on the Billboard Hot R&B/Hip Hope Songs chart.

“Lonely Together” is a progressive house track from British singer Rita Ora and Swedish DJ Avicii, released in 2017.

The song’s lyrics share the story of a girl who seeks to escape life’s pain and loneliness by pursuing a relationship with a man she knows isn’t good for her.

This soft rock hit from John Lennon is one of the most performed songs of the 20th century, with over 200 artists performing covers, from Madonna and Elton John to Diana Ross and Lady Gaga.

“Imagine” asks listeners to picture a world without fighting, division, materialism, and poverty, but only peace and love.

The hopeful track reached #1 worldwide, including in South Africa, Australia, and Canada, and in 1999, it received a Grammy Hall of Fame Award.

5. All You Need Is Love – The Beatles

The Beatles played “All You Need Is Love” on the “Our World” TV special, broadcasted in twenty-four countries in 1967.

John Lennon wrote this tune about peace and love because they are easy-to-understand concepts for people of all nations.

If you’re a die-hard Beatles fan, you’ll be happy to know that they made it onto our best songs of all time playlist with their hit, “Strawberry Fields Forever.”

“All You Need Is Love” was an international sensation, charting #1 worldwide in 1967.

One of the best ways to inspire unity is to treat everyone with respect, and that’s precisely the message that comes across in this hit by Tim McGraw.

This sweet country song features McGraw advising listeners always to remain humble, be kind to everyone, and maintain a strong moral character.

3. Where Is The Love – The Black Eyed Peas

The Black Eyed Peas make yet another appearance on this list with their hit song, “Where Is The Love,” released from their third album, Elephunk, in 2003.

Originally inspired by the 9/11 terrorist attacks, the song’s lyrics explore the world’s many problems and offers love and unity as solutions.

This pop/hip hop track peaked at #8 on the Billboard Hot 100 and was the highest-selling single of 2003.

2. What A Wonderful World – Louis Armstrong

If you’re struggling to find beauty in the world we live in, we suggest listening to this beautiful pop song by the legendary jazz singer Louis Armstrong, which speaks about appreciating your surroundings.

If you love karaoke, check out our best karaoke songs of all time playlist, which also includes “What A Wonderful World,” one of Armstrong’s most classic hits.

1. One Love – Bob Marley And The Wailers

Bob Marley takes the top spot with “One Love,” the absolute perfect song about world peace and coming together.

The reggae hit was released from the band’s debut studio album in 1965 and made the clarion call for unity and togetherness despite the chaos and turmoil occurring around the world.

If you love Marley’s music, we encourage you to check out our best 80s songs playlist, which features his hit, “Could You Be Loved.”

Sounds like it’s time to wrap up! These incredible songs about unity prove that there’s strength in numbers.

Bob Marley’s “One Love” stands out from the rest with its creative reggae beat, encouraging listeners to do their part to create a more peaceful and unified world.

At the end of the day, we’re always better together!

What’s the best song about unity and togetherness, in your opinion? Leave a comment below.