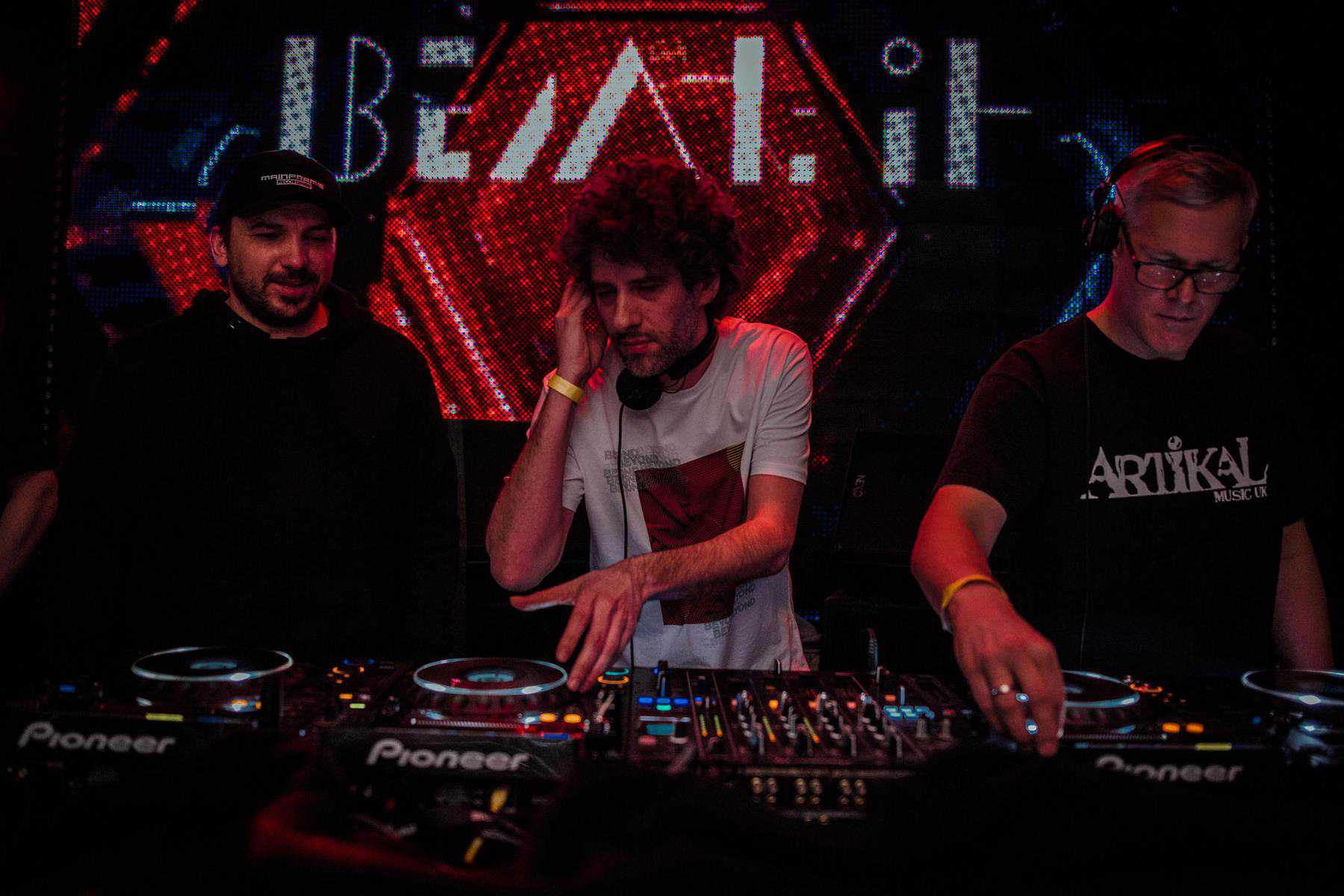 What do DJs do? This is a question that’s often asked, but still, most people don’t have a clue what DJs actually do.

Aside from getting paid to push buttons, play pre-recorded tracks, and enjoy the party, it doesn’t seem like they do a lot, right?!

Well, although there’s no denying that some DJs don’t do much, it’s not as common as you might think.

What DJs actually do varies, from research and track selection to beatmatching, mixing, and producing.

So, now that we have a basic understanding of what a disc jockey does, let’s dig a little deeper and find out what DJs really do!

First, to be clear, we thought we’d clarify exactly what a DJ is.

A DJ (short for disc jockey) plays recorded music to an audience.

Even though a mobile DJ and radio DJs usually work from different venues, fundamentally, a DJs’ job remains the same: to select the right tracks to play to an audience to keep them entertained and engaged.

What Do DJs Do On Stage?

A DJ’s main goal on stage is to entertain the audience and keep them engaged with the music.

However, if the crowd isn’t feeling the DJ’s song selection, mixing skills, or even emceeing abilities, they may decide to leave, which is one of the worst situations a DJ can encounter.

So, let’s take a look at what DJs actually do onstage to make sure the crowd is entertained. 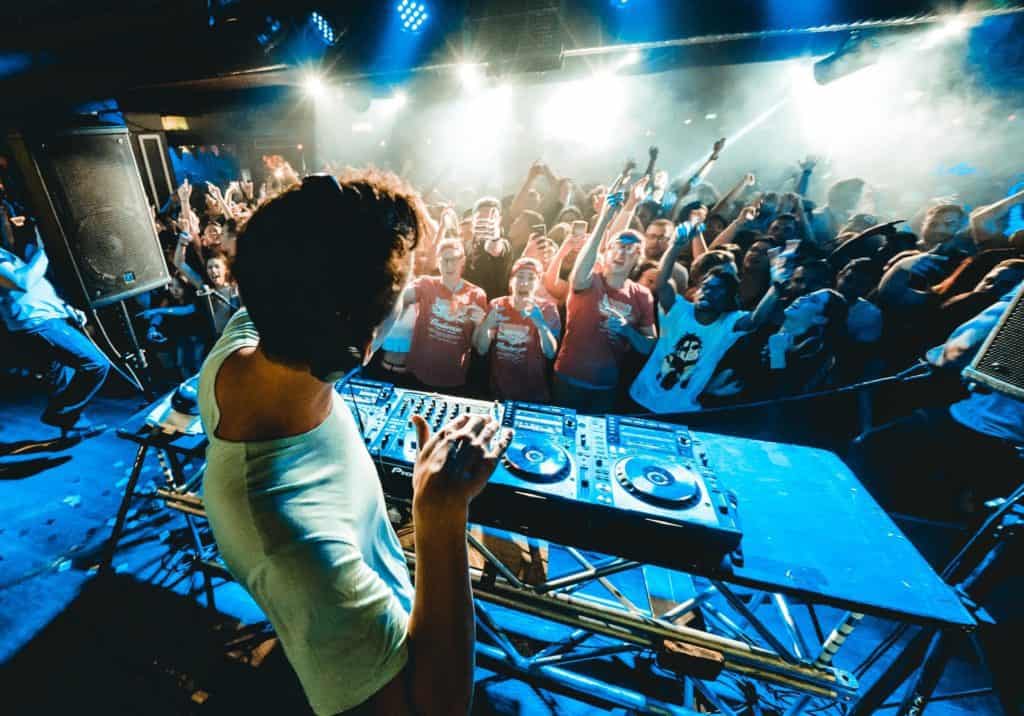 When people ask what DJs do?, they often don’t realize that one of the DJs’ most important skills is their ability to read the crowd.

By reading the crowd, many DJs look at how the audience reacts to their current song selection and song choices accordingly.

For example, if the crowd looks like they’re tired, then it’s the DJs job to pick up on that and slow the tempo down to reflect the audience’s mood.

The same applies if the dance floor looks a little bit empty; the DJ then needs to find one track that encourages people to dance, often songs that use a higher tempo.

DJs will then choose songs based on what they think the audience will react well to and use their mixing skills to transition from one song to the next. 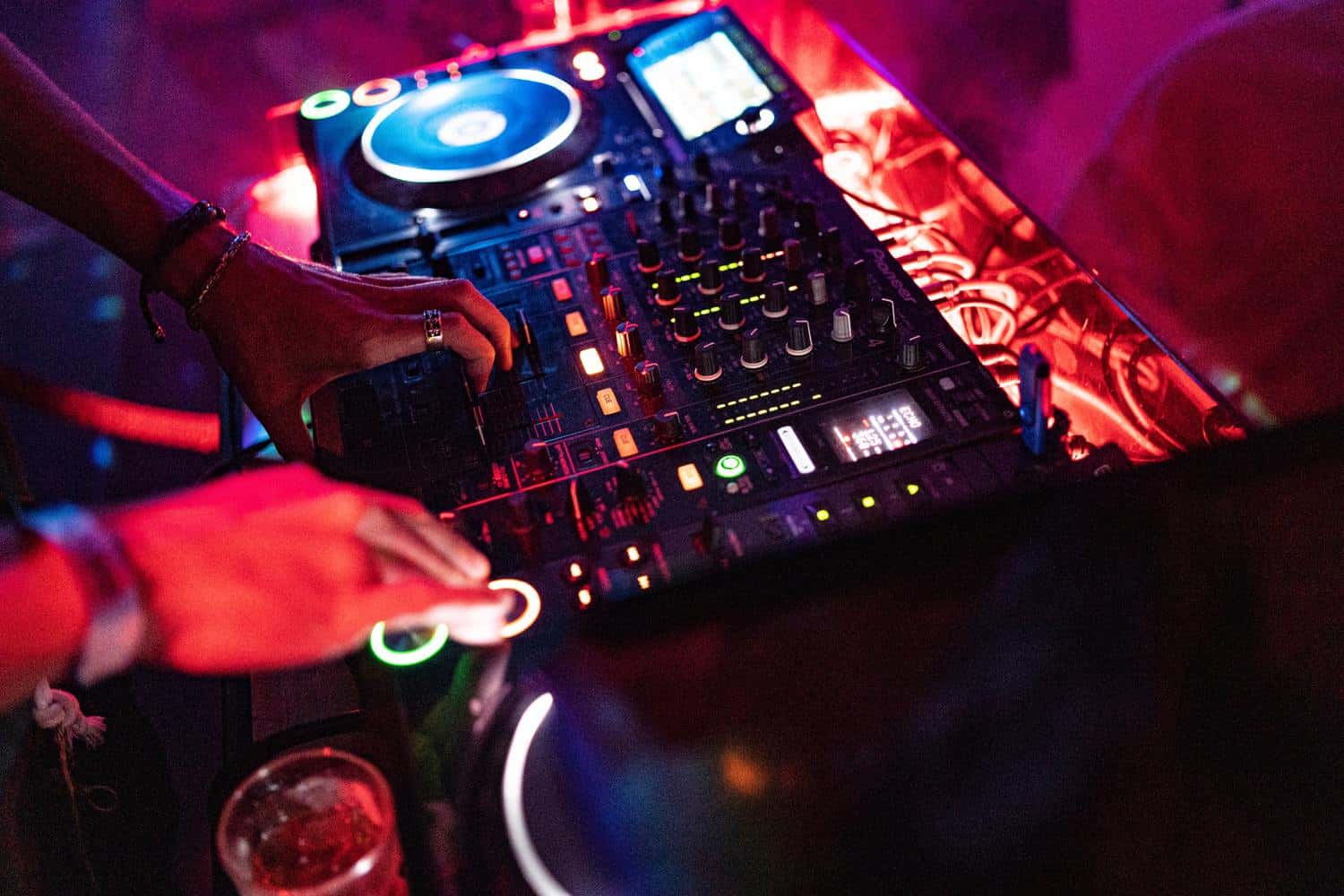 What are DJs doing when they turn knobs?

Well, you’ll be interested in knowing that those knobs on DJ mixers are responsible for controlling things like volume and EQ, as well as lots of different audio effects, like echo/reverb, delay, and filter sweeps.

The majority of modern DJ equipment, such as DJ controllers, come with various knobs, buttons, pads, and faders that you can set up to control different FX.

For example, using DJ software like Serato DJ Pro, you can program certain sounds to activate when you press the corresponding buttons on your DJ controller.

DJ software allows DJs to add some additional layers to the DJ set and keep the audience engaged and on their toes.

Besides that, when you see DJs turning knobs and pushing faders on a DJ controller, they’re also adjusting each track’s volume and adding EQ (equalization), which allows them to modify the frequency response of different elements in the mix.

These effects allow the DJ to mix using a DJ mixer without the audience telling where the songs change, which is one of the signs of a good DJ. 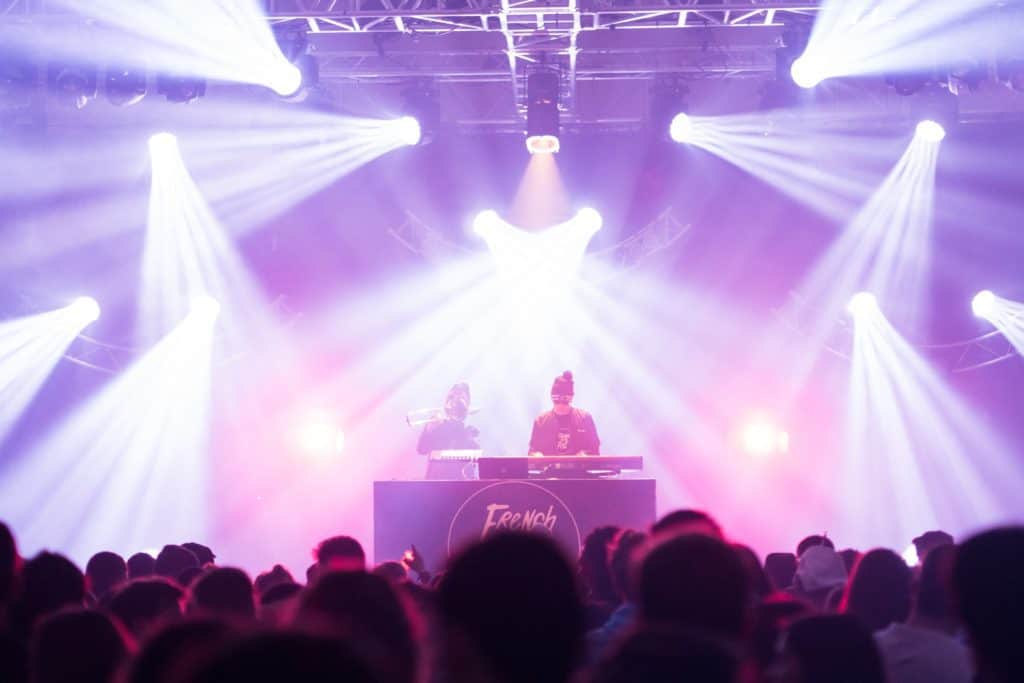 Depending on the event, club, or situation, some DJs add visual effects to their sets, using various DJ hardware to bring even more value to their audience.

These include syncing light effects with digital music, adding videos, still images, animated visualizations of lyrics to screens throughout the venue, and even controlling lavish fire and water displays using various types of DJ hardware.

By adding these extra bells and whistles to live performances, DJs keep the crowd highly engaged with the music and enhance their overall experience. 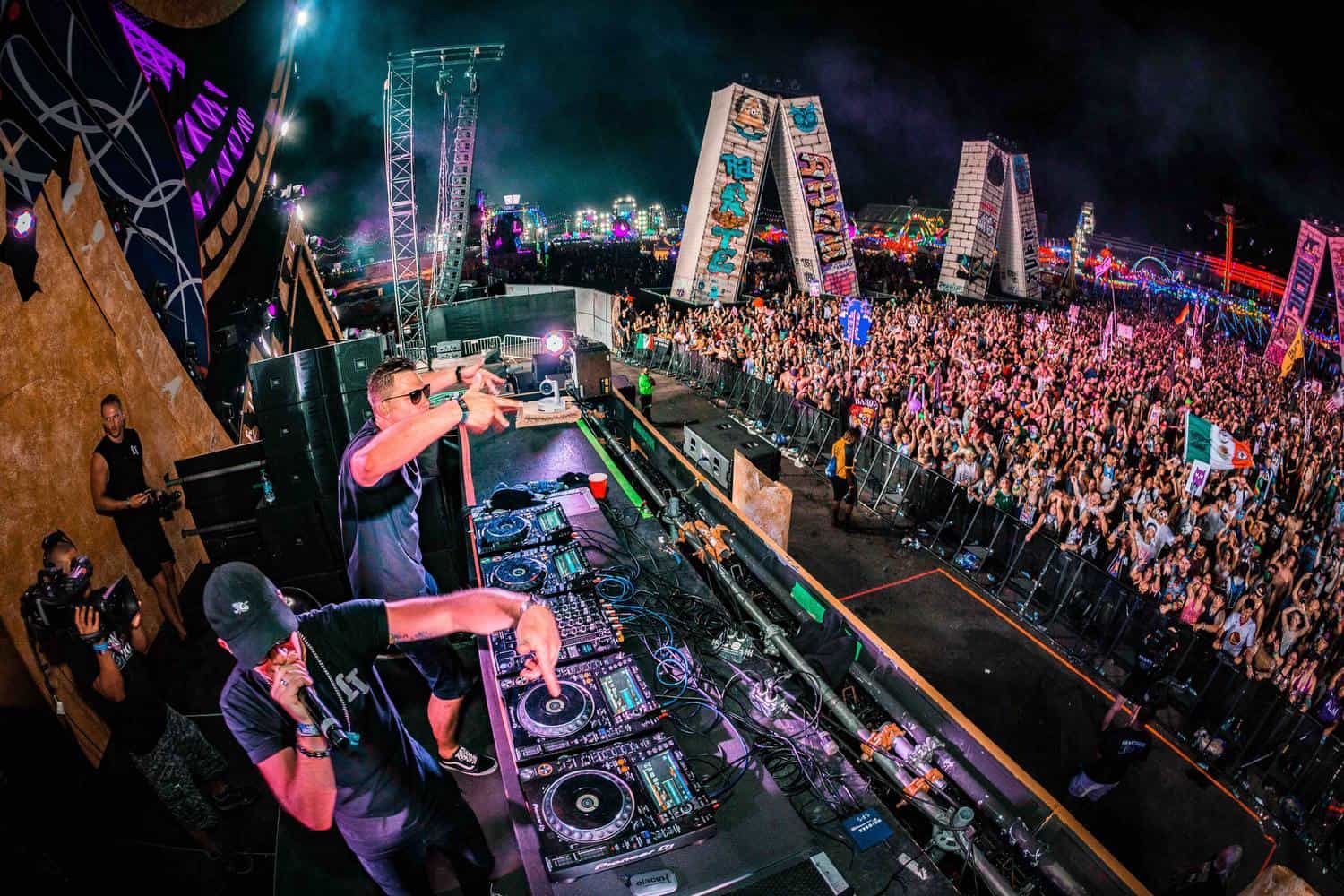 In this day and age, part of a DJs responsibility as an entertainer is to offer a certain level of showmanship.

DJs that can put on a show for their audience are far more likely to be re-booked and paid more than DJs who play music without regard for the extra details.

Wedding DJs and high-profile event DJs, for example, are more often than not required to take requests throughout their set and even emcee the event.

This means they use a microphone to interact with the audience and guests, let people know what’s going on and where to go, and provide a humorous tone to the event.

However, it’s not just wedding and special event DJs that have to put on a show, as the biggest DJs in the world are probably the greatest showman of all, as a lot of people are paying hundreds of dollars to see them perform.

One of the most notorious showmen in the DJ world is Steve Aoki. He’s well known for “caking” the audience, often throwing giant cakes into the crowd for absolutely no reason.

This type of showmanship and entertainment keep people talking and therefore buy more tickets to concerts and download more music.

So, providing a show and entertaining the crowd is now one of the biggest responsibilities a DJ has.

What Do DJs Do Offstage?

Now that we understand what DJs do on stage, let’s delve a little deeper into what they do offstage! 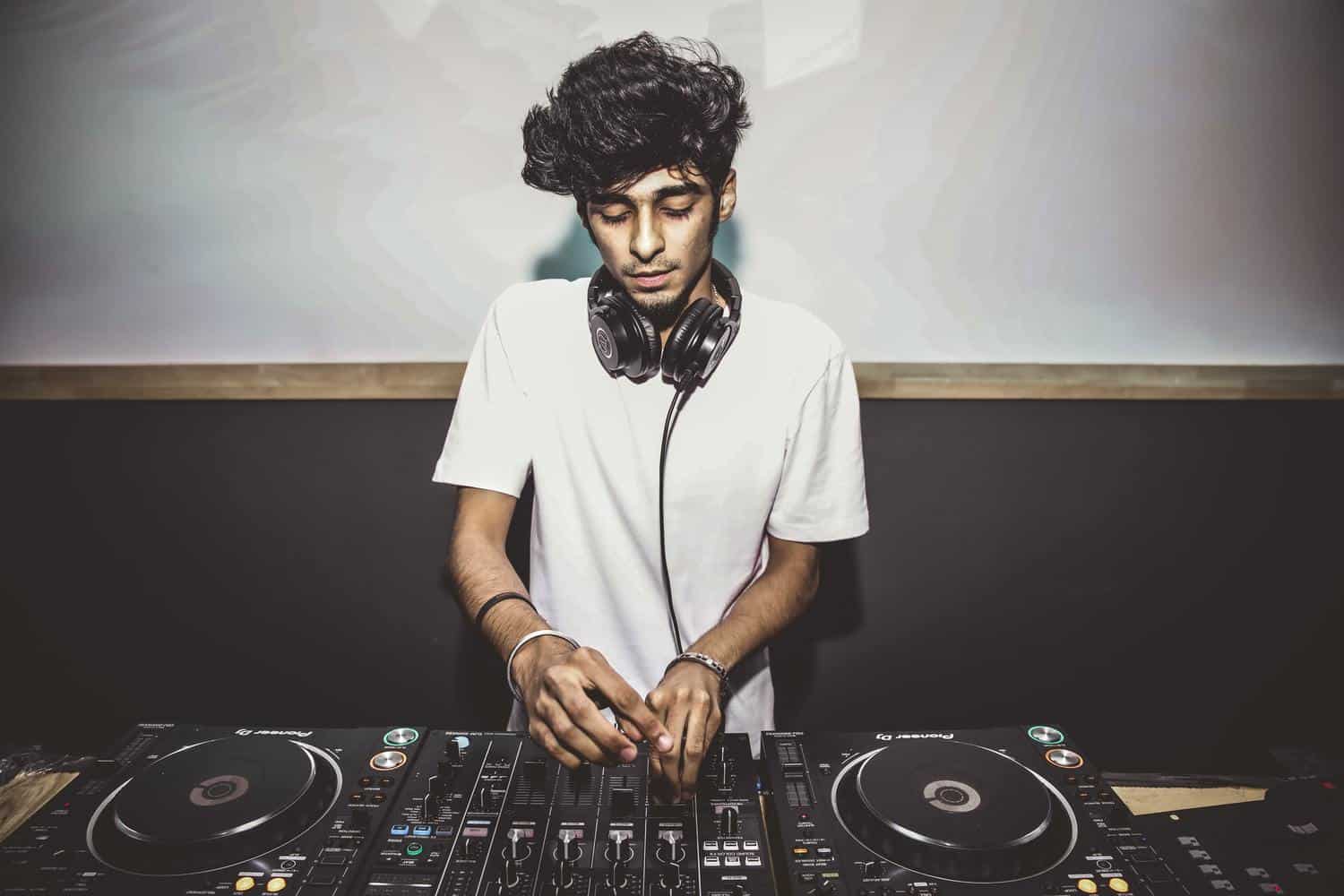 We all know that to be good at something, you have to practice.

The same is true for DJs; they also have to put in the work to get good at their craft.

DJs spend hours learning going through one track to another, working out which tracks work well together, and practicing their scratching if they’re a turntablist DJ.

They also have to practice beat matching and mixing, as popular songs have varying tempos, so they have to know how to mix and match different kinds of BPM (beats per minute) correctly. 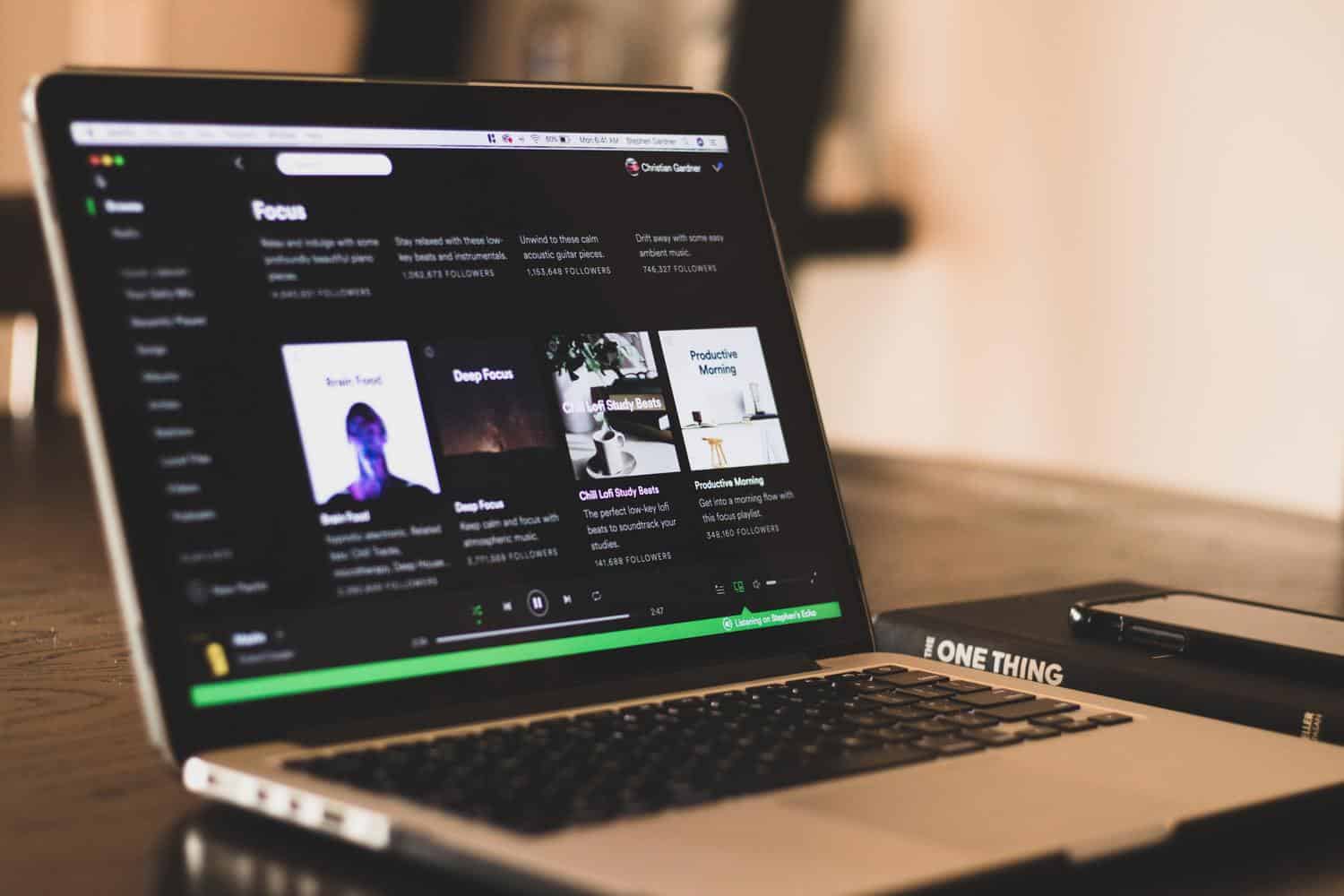 On top of practicing, a disc jockey also spends time searching for, listening to, and choosing new music to use in their sets.

This takes a lot of time, especially for DJs who don’t stick to one style or genre of music, like hip hop or dance, as they have to go through thousands of tracks to build a music library broad enough to entertain multiple audiences.

So, where DJs get their music can vary a lot, but generally speaking, they spend most of their time looking through different DJ record pools and streaming services, such as Spotify and BPM Supreme.

Once they’ve built up a big enough library, they’re then able to make sure they always have a decent selection of songs loaded into their DJ software that the crowd will react well to.

3. Produce Their Own Tracks 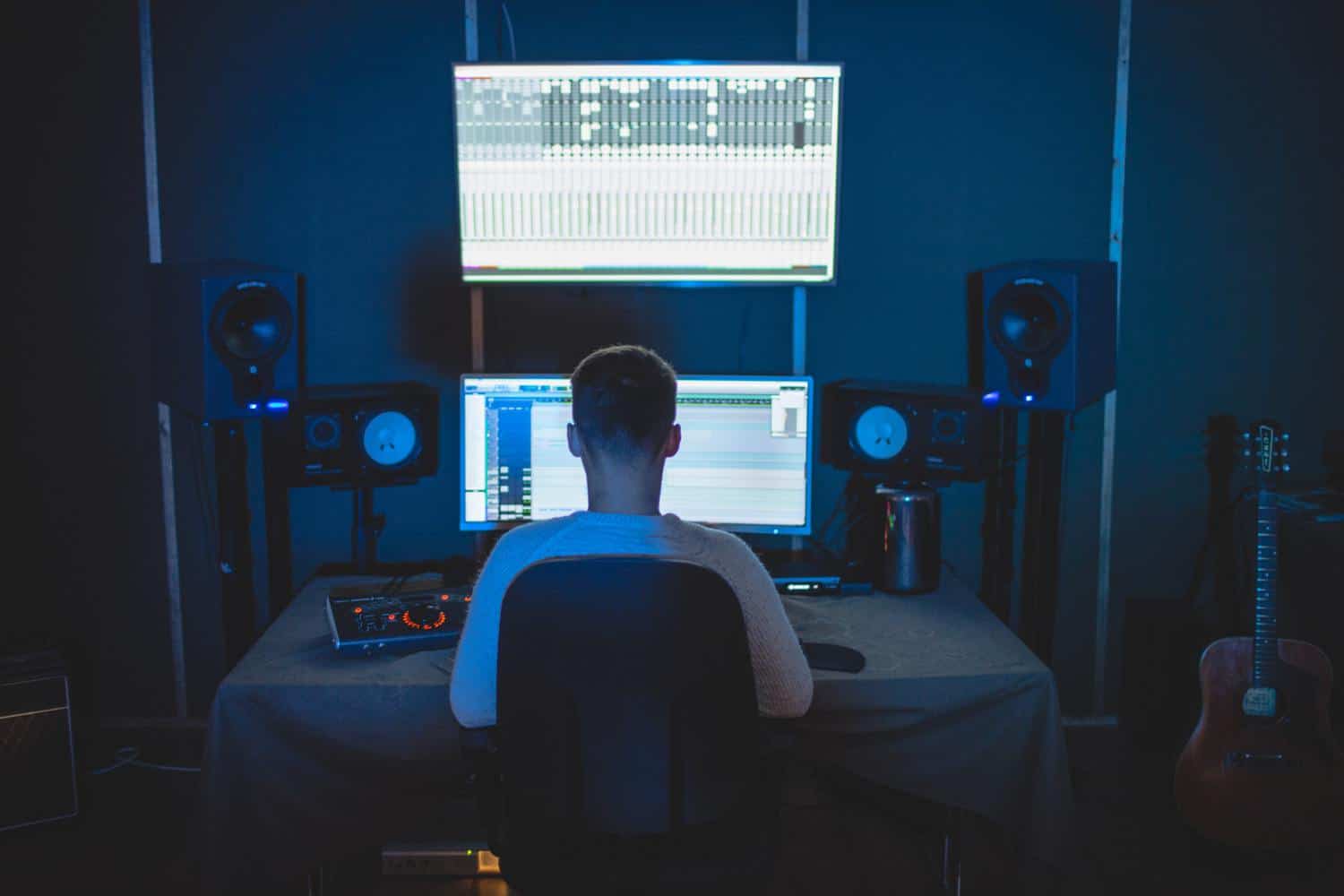 The music that you hear most DJs play is usually a selection of songs from different chart-topping artists from various genres, like hip hop, dance, D&B, and more.

On the other hand, some DJs produce their own music, like Deadmau5 and Marshmello, two of the highest-paid DJs on the planet.

However, this is less common as more and more high-profile DJs turn to ghost producers to create their tracks for them, as they’re busy playing shows worldwide.

So, What Do DJs Actually Do? 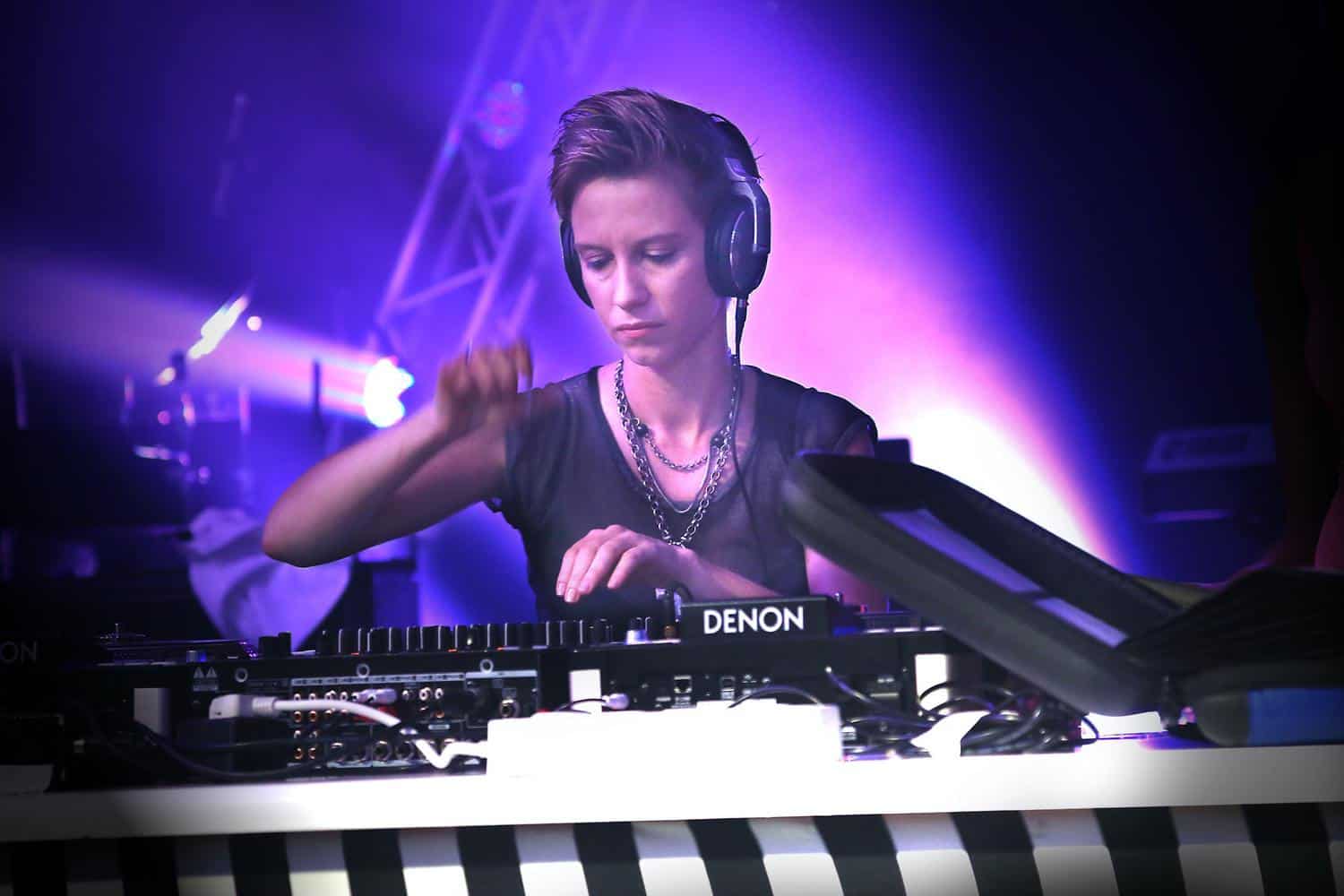 Apart from the live performance side of things, DJs spend most of their time researching, practicing, planning, and producing.

Beginner DJs might spend time cultivating a pre-planned selection of songs so they know exactly what they’re going to play.

In contrast, more experienced DJs may prefer freestyling tracks based on the crowd’s mood and the style of the venue/event.

While they’re watching the crowd and selecting the next track, DJs also make sure the transitions between songs sound good.

They do this by blending two tracks together as seamlessly as possible, ensuring they’ve matched the tempo and each track’s volume.

Also, a radio DJ, a wedding DJ, and a club DJ all have their own unique responsibilities that they need to get done, but the overall outcome of entertainment and engagement is the same.

It’s fair to say that most DJs’ work is done behind closed doors, prepping and planning.

Although it might look easy, DJing takes years of practice to get to a point where it looks easy, and people wonder what you’re doing on stage.

Hopefully, we’ve shed a bit more light on all the different things DJs have to manage and organize to be a world-class disc jockey.

Anything we’ve missed that DJs do? Let us know in the comments.

How Much Do DJs Make?