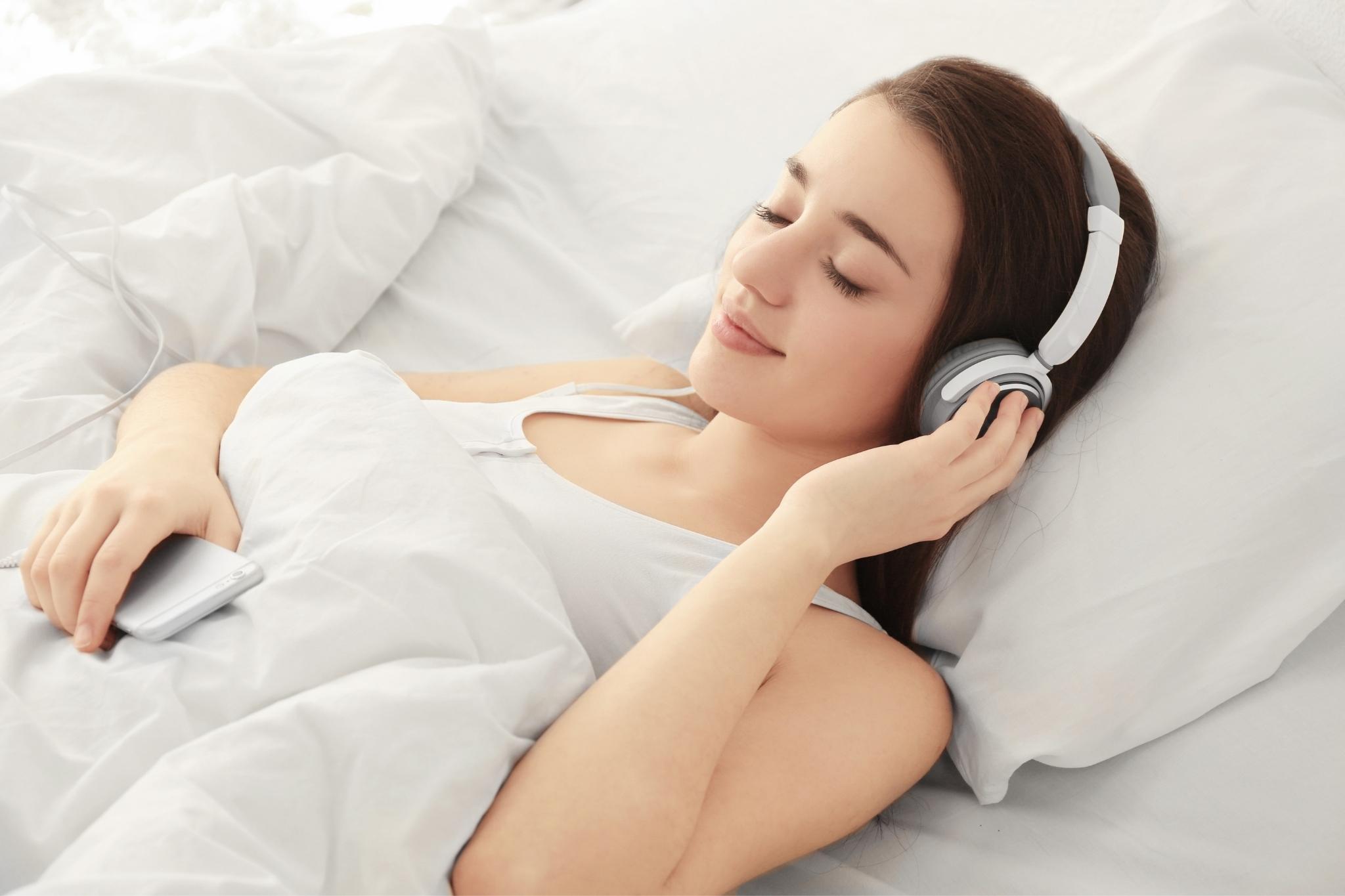 Whether you’re an insomniac or a sleepaholic, these songs about sleep are incredibly relatable.

Sleep plays a significant role in our lives, and artists from all genres have centered lyrics around sleeping, as it can be one of the best or worst parts of a person’s day.

Continue reading below to discover the music industry’s greatest sleep-focused hits of all time.

We’ve listened to lots of incredible songs about sleeping, and after thoughtful review, we’ve made our picks for the top spots.

Here’s our playlist of the 23 best songs about sleep & falling asleep:

The lyrics for “Wake Me Up Before You Go-Go” talk about how crazy the narrator feels about his new lover and how he never wants to miss being with her.

If you’re a fan of Wham! and karaoke, you’ll be happy to know that the band also appears on our best karaoke songs playlist with this same song.

The song soared to #1 on multiple charts worldwide, including in Australia, Belgium, Hungary, Iceland, Norway, Sweden, and the U.S in 1984.

This single from 5th Dimension was released off their 1972 album, Individually & Collectively.

“(Last Night) I Didn’t Get To Sleep At All” is a soul tune about sleeping all day and being awake all night while thinking about someone special.

“I Don’t Want To Miss A Thing” is a hard rock ballad with a romantic touch, making it the perfect tune for nighttime.

The song talks about a male narrator’s love for his woman and how he misses her even when they’re sleeping.

This classic hit took #1 on the Billboard Hot 100 and the top spot on charts in Australia, Ireland, and Norway throughout 1998.

If you’re into pop music (specifically pop club anthems), then you’ll love this one from Daya.

“Insomnia” is all about the sleep deprivation that occurs in the life of a touring musician. However, there are also references to finding a new love interest and enjoying an all-night party.

The song made #10 in the Czech Republic and Denmark while hitting #12 in Norway and #22 on the New Zealand Hot Singles chart in 2019.

English rock band, Radiohead, released this song from their sixth studio album, Hail to the Thief. It focuses on the feeling of being powerless to change society and how we are just encouraged to “sleep” through it all.

Interested in listening to more of their music? Check out their song “Creep” on our best 90s songs of all time playlist.

The Beatles released “I’m Only Sleeping” from their 1966 studio album, Revolver.

This song discusses the incredible feeling we all get when we stay in bed a little longer, which John Lennon preferred.

Many other artists performed their own versions, including Rosanne Cash, America, Vince Welnick, The Vines, Suggs, and Jeff Tweedy. The Suggs’ cover made the top ten on the UK Singles chart in 1995.

17. The Lion Sleeps Tonight – The Tokens

“The Lion Sleeps Tonight” is originally a hunting song formerly titled “Mbube,” which means “lion” in the Zulu language.

The lyrics reassure listeners that even though humans are living near the lion, they are at peace because he is sleeping.

16. Talking In Your Sleep – The Romantics

American rock band, The Romantics, released one of the best songs about sleep, “Talking In Your Sleep,” from their 1983 album, In Heat.

The subconscious mind can be more honest than the conscious mind, and in this song, the male narrator hears his woman professing her love for him in her sleep.

15. You Can Sleep While I Drive – Melissa Etheridge

American singer-songwriter, Melissa Etheridge, released this pop-rock hit on her second album, Brave and Crazy, in 1989.

In “You Can Sleep While I Drive,” the female narrator requests that her lover joins her on a road trip through the night. And if he can’t manage to stay up, she offers to drive.

Country singer, Trisha Yearwood, covered the song, and it peaked at #23 on the Billboard Hot Country Charts in 1995.

This hit from English rock band, The Smiths, was released as a B-side to their single, “The Boy with the Thorn in His Side.”

Are you a fan of The Smiths? Then, check out their other song, “How Soon Is Now?” featured on our best 80s songs of all time playlist.

“Asleep” gained popularity in Europe, reaching the #23 spot on the UK Singles chart and #15 in Ireland in 1985.

“I Can’t Sleep” features a sad and lonely male narrator who can’t seem to fall asleep because he’s lost the woman he loves, and it’s taking its toll on him.

English singer-songwriter, Ellie Goulding, released her hit synth-pop song, “Lights,” in 2011 from her debut studio album of the same title.

The lyrics are based on Goulding’s childhood fear of sleeping in the dark and a special person in her life who brings her comfort.

“Lights” reached the top twenty in multiple countries, including Austria, Belgium, Canada, Germany, and New Zealand, while also soaring to #1 on the U.S. Billboard Mainstream Top 40 and #2 on the Billboard Hot 100.

“I Don’t Like To Sleep Alone” is a pop song written and performed by Canadian singer-songwriter Paul Anka, featuring American singer Odia Coates.

This beautiful tune talks about a man begging his love interest to help him make it through the night by sleeping by his side.

This track became a #1 hit in Canada, reaching the top spot on the Canadian Pop and Adult Contemporary charts. It also earned the #8 spot on the U.S. Pop and Easy Listening charts in 1975.

10. No Sleep Till Brooklyn – The Beastie Boys

The song describes how tired the band felt after a long tour and what made it so exhausting while also declaring their determination not to rest until they return to Brooklyn, NY.

The Kinks songwriter, Ray Davies, wrote the original “I Go To Sleep,” which Peggy Lee recorded in 1965. Pop-rock band, The Pretenders, released their version of it in 1981.

Davies wrote the ballad as a lullaby for his daughter while he waited for her to be born in the hospital. Its lyrics talk about going to sleep and dreaming of a special person.

“Mr. Sandman” was originally written by Pat Ballard in 1954, but The Chordettes produced their version the following year.

Its lyrics are based on the mythical character of “Mr. Sandman,” who is believed to give people good dreams. In this song, the female narrator asks him to bring her a good man.

The song was #1 on the Billboard Best Sellers in Stores, Most Played by Jockeys, and Most Played in Juke Boxes charts between 1954 and 1955.

This song was inspired by the 1995 film Braveheart and frontman John Cooper’s own experience dreaming about his deceased grandfather.

“Don’t Wake Me” is a song about experiencing loss, whether it’s a lost love or a loved one who passed away, where the only time you can see them again is in your dreams.

The Christian rock hit came from Skillet’s seventh studio album, Awake, which debuted at #2 on the Billboard 200 and took #1 on the U.S. Christian Albums and U.S. Alternative Albums charts in 2009.

This is one of the most intriguing psychedelic folk songs about sleep that’s also quite uncharacteristic for Pink Floyd since it’s a soft acoustic love song.

“A Pillow Of Winds” focuses on the peace and tranquility of sleep while detailing the various stages of sleep and dreaming.

“Golden Slumbers” is actually a 17th-century poem called “Cradle Song” by Thomas Dekker, which Paul McCartney put to music in 1969.

You can find more from The Beatles on our best songs of all time playlist, which includes their hit, “Strawberry Fields Forever.”

The lullaby came from The Beatles’ album, Abbey Road, which took the top spot on charts worldwide, including in Norway, Australia, Canada, Spain, Italy, the UK, and the U.S in 1969.

This classic (and kind of creepy) Metallica track was released as the lead single from the band’s self-titled fifth album.

“Enter Sandman” is a heavy metal song describing Mr. Sandman as an evil monster who frightens children at night. It also appears on our best songs about dreams playlist, where you can find more sleep-related hits.

Canadian singer-songwriter, The Weeknd released this electropop hit as the second single from his fourth album, After Hours.

“Blinding Lights” explores the male narrator’s intoxication with his former lover and how he can’t sleep unless he touches her.

“How Do You Sleep” is a dance-pop song featured on Sam Smith’s third studio album, Love Goes.

The tune talks about a troubled male narrator who wonders how his lover sleeps at night when they lie to him and cheat on him.

If you’re someone who enjoys getting lost in house music, then “Insomnia” by Faithless is sure to become your favorite song.

In this track, the narrator experiences insomnia and shares the many difficulties people with sleeping disorders face every day.

Hopefully, now you have a convenient playlist packed with relaxing songs that will have you sleeping sweetly in no time.

And if you’re having trouble falling asleep, we’re sure you’ll find a tune or two that’ll get you through the night.

What’s the best song about sleep, in your opinion? Leave a comment below.