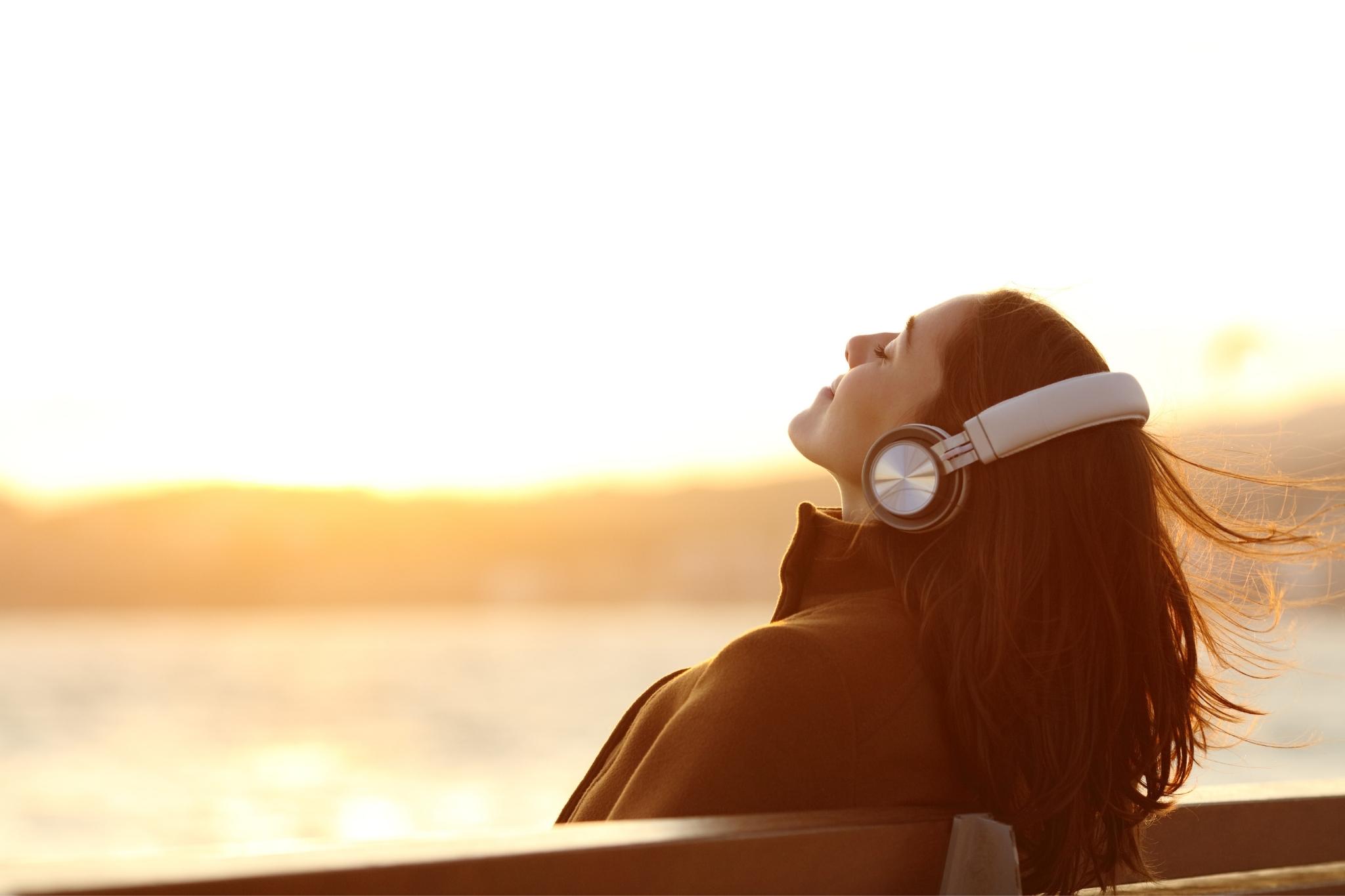 We all want to be free in life, which is probably why songs about freedom are so popular.

Thousands of artists around the world have spilled their hearts, sharing their longing for liberty.

Whether escaping the workweek, a toxic relationship, injustice, or embracing patriotism, you’re sure to find a freedom song below that resonates with your situation.

The 33 Best Songs About Freedom

After careful consideration, we’ve identified what we think are the greatest freedom tracks the music industry offers.

Here’s our list of the 33 best songs about freedom:

“Philadelphia Freedom” is a soul/pop song inspired by the U.S. celebrating 200 years of independence in 1976.

The tune was originally written as a favor to John’s friend, Billie Jean King, a member of the Philadelphia Freedoms pro tennis team.

This freedom song soared to #1 on the Billboard Hot 100 and the Canadian Top Singles chart in 1975.

Bruce Springsteen covered this Bob Dylan song on his “Chimes Of Freedom” EP in 1988. If you’re into Springsteen, you can also find him on our best 80s songs playlist with his track, “Born In The U.S.A.”

“Chimes Of Freedom” focuses on the distress and unfair treatment of destitute people in the world, using imagery of thunder and lightning.

This classic song made #16 on the Mainstream Rock chart in 1988, while the EP sold over 50,000 copies in Canada during the same year.

“Freedom” is an upbeat jazz/R&B hit that’s sure to make you break free!

The song celebrates sexual and social expression, focusing on the fact that each person has a right to love and be who they want.

This track earned Batiste a Grammy Award for Best Music Video in 2022 and peaked at #4 on the Billboard Digital Sales charts in 2021.

Our list of best songs about freedom wouldn’t be complete without an independent ladies’ anthem like this one.

“Miss Independent” talks about a girl who is proud of her independence but who learns to let her guard down and allow herself to fall in love.

If you’re a fan of Kelly Clarkson, check out her song, “Since U Been Gone,” on our best songs of all time playlist.

If you’re into new wave music, you’ll love this hit from Talk Talk.

Although the lyrics are pretty ambiguous, this song describes a man who is aware that his woman is cheating on him but who asserts that he has the right to stay in the relationship if he wants.

“I’m Free (Heaven Helps The Man)” was released in 1984 as a single for the soundtrack of the popular film, Footloose.

The lyrics refer to a determined man who vows to win the girl he loves despite the many obstacles in his way.

Some of the best music comes from movie soundtracks, which is the case for this hit. This tune was written specifically for the film Django Unchained.

“Freedom” is all about taking charge of one’s own life and finding freedom, even though fighting for it may come with a high cost.

“Free Your Mind” was released as the third single from En Vogue’s second album, Funky Divas, in 1992.

The anti-prejudice pop/rock song challenges racism and sexism and was written in response to the 1992 Los Angeles Rodney King riots.

If you’re looking for the best freedom songs in the rock genre, look no further!

“I’m Free” by The Rolling Stones is all about the beauty of personal freedom and free will, stating that we all can choose to do what we want.

“Running Free” is the debut single by the heavy metal band Iron Maiden, released in 1980.

Vocalist Paul Di’Anno says the lyrics are basically about being 16 and running wild and free (and getting into trouble).

Here’s a pop/funk hit from 1990 that’ll give you an authentic taste of freedom. George Michael’s “Freedom ’90” was his attempt to break free from his record label, Sony, and the image they created for him.

If you’re looking for more George Michael songs, check out his song, “Faith,” on our best karaoke songs playlist.

“Rockin’ In The Free World” is widely considered one of Neil Young’s most iconic songs. It’s a sarcastic track that serves as a criticism of the Bush administration and the faults of America.

It was written after Young found out that his band tour to the Soviet Union was canceled, and his guitarist said, “we’ll have to keep on rockin’ in the free world.”

This hard rock anthem reached #2 on the Billboard Mainstream Rock Tracks chart in 1989 and appeared in the 2015 film, The Big Short.

This folk-pop song was released as the first single from Furtado’s debut studio album, Whoa, Nelly!

In “I’m Like A Bird,” the singer describes how much she loves her freedom and how she could fly away from her man at any moment.

The hit won a Grammy Award for Best Female Pop Vocal Performance in 2002 and the Juno Award for Single of the Year in 2001.

“Freedom” is a British pop song that took the world by storm in 1984.

The track describes group member George Michael’s love for a girl and how he wants to commit to her and not see other people.

19. I Wish I Knew How It Would Feel To Be Free – Nina Simone

This gospel/jazz song was an anthem during the Civil Rights Movement in the 1960s, an expression of a black person’s feelings about slavery and oppression.

“I Wish I Knew How It Would Feel To Be Free” was originally by Billy Taylor, but Nina Simone covered it in 1967.

This tune fuses synth-pop with reggae, making it one of the most unique freedom songs on this list.

The song is sung from the perspective of a man whose woman has left him because she thinks their relationship is holding her back from her freedom.

“Break My Stride” was a worldwide hit, reaching #5 on the Billboard Hot 100 and charting within the top ten in more than ten countries.

“God Bless The U.S.A.” is one of the most patriotic songs about freedom ever written.

Considered Lee Greenwood’s signature song, its lyrics focus on being proud to be an American and recognizing that freedom came at the cost of people’s lives.

Steely Dan released this jazz-rock freedom hit in 1977 off their album, Aja.

The autobiographical lyrics share the story of a loser who just wants to escape his reality and find somewhere he belongs.

If you’re interested in listening to some soul/folk music, you should definitely add this one to your playlist.

The lyrics are sung from the perspective of a woman who doesn’t quite fit in with everyone else but who is thankful that she’s free, at least.

“Freedom” was released on Beyoncé’s sixth studio album, Lemonade, in 2016.

“Born Free” is a southern rock jam from Kid Rock’s eighth album of the same name and talks about how everyone in the U.S.A. is lucky to live in a free country.

If you’re looking for more Kid Rock songs, check out “All Summer Long” on our best summer songs playlist.

12. Freedom – Rage Against The Machine

This Rage Against The Machine hit was released off the band’s self-titled album in 1994.

The theme of “Freedom” is the idea that the U.S. government convinces Americans that they’re free when the reality is they aren’t.

If you love synth-pop, then you’ll enjoy this one from English band Tears For Fears.

“Shout” is one of the most iconic songs of the mid-eighties, which encourages listeners to protest authoritative institutions and issues around them.

The track topped charts worldwide, including in Australia, Belgium, Canada, Germany, and the Netherlands in 1985.

“The Guitar Man” is a hauntingly beautiful song that shares the story of a musician and his relationship with his fans.

This song about freedom and redemption shares the story of a man who has been persecuted for years but who has triumphed over it with some heavenly help.

The folksy track sold over 400,000 copies in the UK, making it certified gold, and was covered by many acclaimed artists, including Stevie Wonder, John Legend, and Bono.

You can’t get any freer than this funk-rock tune from Lenny Kravitz’s fifth studio album, 5.

“Fly Away” is a simple song about freeing your mind, escaping life, and going to another place where everything is different.

The track won a Grammy Award in 1999 for Best Male Rock Performance and peaked within the top ten of multiple countries, from Canada to Ireland.

The jam is a sort of social commentary, criticizing how society blindly complies with whatever the authority figures impose on them.

This hit peaked at #2 in the Netherlands and #6 on the Billboard Hot Modern Rock Tracks chart in 2008.

“Wind Of Change” was written in response to political events in Germany during the early 90s.

The pop-metal anthem is the best-selling single by a German artist and topped charts in multiple countries, including France, the Netherlands, and Austria in 1991 and 1992.

If you’re looking for something in the dream-pop genre, “Get Free” is your tune.

The lyrics are about people who fail to reach their full potential because they allow other people to prevent them from being free.

This track peaked at #20 on the Billboard Hot Rock Songs in 2017 and is widely considered by fans to be the best song off Del Rey’s album, Lust for Life.

If you’re looking for something more pop-rock, we highly suggest “I Want To Break Free” by the legendary Queen.

The song earned the #45 spot on the Billboard Hot 100 and #3 in the UK while also topping charts in Austria, Belgium, and the Netherlands throughout 1984.

“Free Bird” by Lynyrd Skynyrd is one of the world’s longest freedom songs, often going past 14 minutes during live shows.

The hard rock jam features a male narrator who leaves a woman because he can’t commit and wants to live free.

This heartland rock hit from Tom Petty is from his debut solo album, Full Moon Fever.

“Free Fallin” talks about a man who chose to pursue a free lifestyle and didn’t appreciate his girl when he had her.

“Freedom” is a feel-good indie-pop tune that earns the top spot on our list of best songs about freedom. It focuses on living a happy, prosperous life without limitations.

You can find another Pharrell Williams song, “Happy,” on our best happy songs playlist.

The track appeared in multiple movies, including the 2017 films Now You See Me 2 and Despicable Me 3 and charted #1 in Belgium and #3 in Greece.

We hope these songs about freedom have offered a truly liberating listening experience that motivates and inspires you.

Sometimes it can be difficult to express the joy of achieving freedom, but we think these tunes sure do it justice.

What’s the best song about freedom, in your opinion? Leave a comment below.