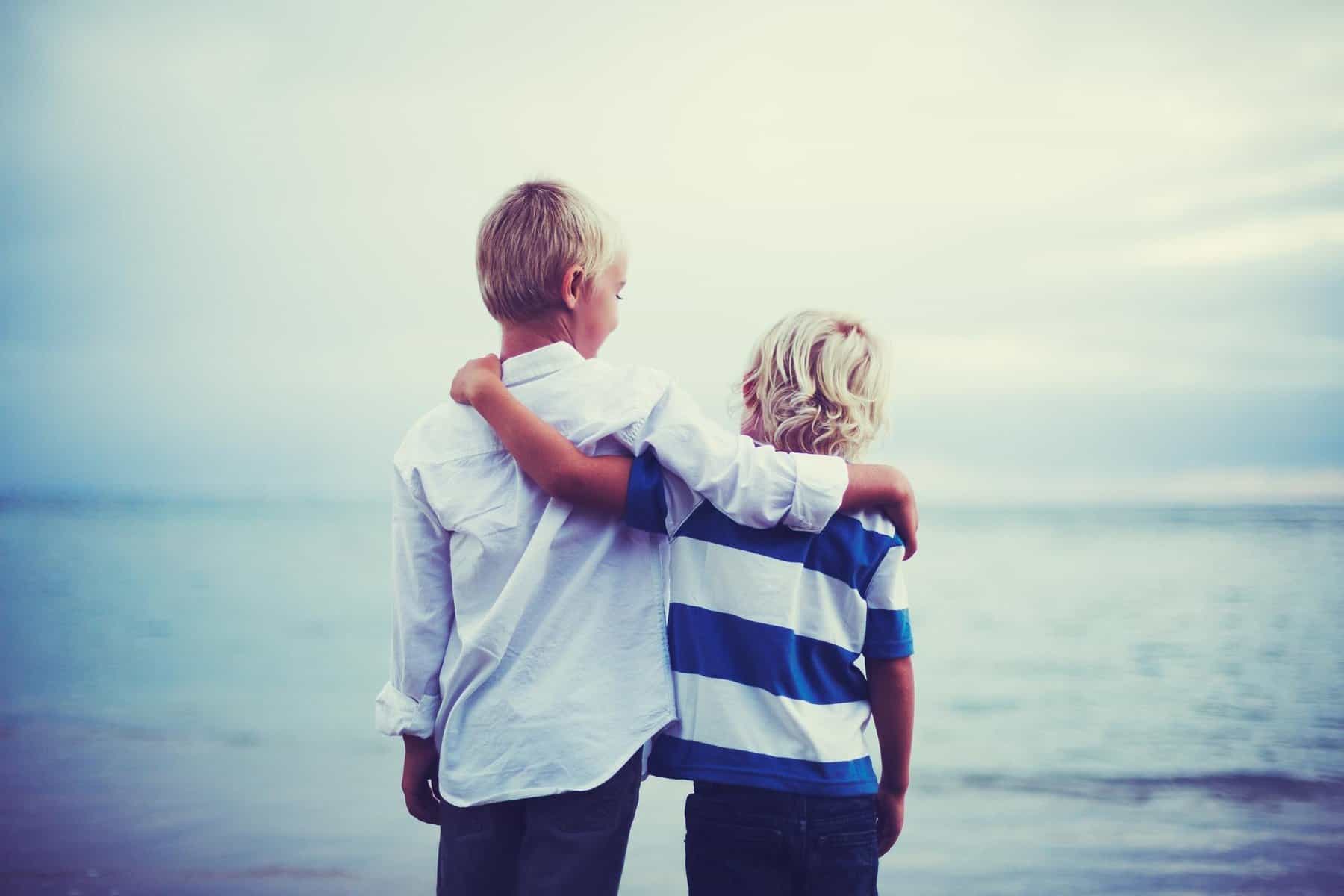 Brothers share a special bond, which probably explains why there are so many songs about brothers in the world.

If you have one of your own, you know firsthand how annoying they can be. But at the end of the day, you know you’d never want to live without them!

Thousands of singers and songwriters have shared personal stories about brotherhood and how valuable it is, and we’re here to share the very best songs with you.

We’ve listened to some of the world’s greatest brother appreciation tracks, and we’ve discovered which ones, in our opinion, beat them all.

Here’s our playlist of the 21 best songs about brothers:

“Unknown Brother’ is one of the sadder songs on this list and serves as the thirteenth track on The Black Keys’ sixth studio album, Brothers.

The lyrics are about band member Dan Auerback’s brother-in-law, who passed away from cancer when he was a teenager.

The Brothers album won a Grammy Award for Best Alternative Music Album in 2011 and peaked at #3 on the Billboard 200 in 2010.

This soft rock hit is written from the perspective of a Vietnam War veteran’s disabled younger brother, who misses him dearly, both his physical and mental presence.

If you’re a fan of Elton John, you’ll definitely want to check out our best 80s songs playlist, which features his song, “I’m Still Standing.”

“Daniel” won an Ivor Novello Award in 1973 for Best Song Musically and Lyrically and reached #1 on the Canadian RPM 100 Top Singles chart in the same year.

19. Brothers On A Hotel Bed – Death Cab For Cutie

“Brothers On A Hotel Bed” was released by the indie rock band Death Cab For Cutie from their fifth album, Plans.

The song talks about a person who thinks his lover will start falling out of love with him as he ages.

The narrator fears that he and his woman will become like “brothers on a hotel bed” who lay on opposite sides of the bed without facing each other.

The Plans album became the band’s best-selling single, charting #4 on the Billboard 200 and receiving a nomination for Best Alternative Music Album at the 2006 Grammy Awards.

“Does To Me” is from Luke Combs’ 2019 album, What You See, featuring country music star Eric Church.

The song describes how Combs celebrates the little things in life and discusses how he is a good brother to his siblings and buddies.

Although it’s one of the newest brother songs on this list, “Does To Me” has still been highly successful, charting #1 on both the U.S. Billboard Country Airplay and Canadian Hot 100 charts in 2020.

This country anthem was originally written by Jimmy Alan Stewart and Tim Nichols and was initially recorded by country singer Moe Bandy in 1989.

“Brotherly Love” is about two brothers who fight all the time and still acknowledge their love for one another.

The song peaked at #2 on the Billboard Hot Country Singles & Tracks chart in 1991 and was nominated for Vocal Event of the Year by the Country Music Association in 1992. It also received a nomination for Best Country Collaboration with Vocals at the Grammy Awards in the same year.

“The Greatest Discovery” is a beautiful song released on Elton John’s second self-titled album in 1970.

The lyrics describe a little boy’s excitement about brotherhood as he gets ready to meet his baby brother.

This tune was inspired by the Falklands War and tells the story of a soldier dying on the battlefield surrounded by his military brothers.

If you’re into Dire Straits, then check out our best songs of all time playlist, which includes their hit, “Money For Nothing.”

This song features a male narrator addressing his love interest and telling her that he loves her more than “brother Louie” who is also a potential suitor.

The track topped charts in multiple countries, including Finland, Greece, South Africa, Sweden, Spain, and Germany, and also took the #6 spot on the European Hot 100 Singles chart in 1986.

Suzanne Vega wrote this country tune when she was 14 years old about her unbreakable bond with her little brother.

This song reminds us to cherish our brothers and remember the love we have for them, even when they get on our nerves.

“Brother Mine” was released on Vega’s eleventh studio album, Close-Up Vol. 4, Songs of Family, which reached #160 on the Belgian Albums chart in 2012.

“Brother” was the fifth single from NeedtoBreathe’s album, Rivers in the Wasteland, in 2015. Fun fact: the original version features American singer-songwriter Gavin DeGraw!

This heartfelt tune was inspired by the tensions between lead singer Bear Rineheart and his brother Bo and how they overcame them and headed their relationship.

If you’re looking for one of the earliest Coldplay hits, you’ve found it! “Brothers And Sisters” was the band’s debut single in 1999.

The track features a call-to-action message, urging people to come together in unity and love one another like family.

This catchy folk rock track was released as the fifth song on Springsteen’s 1982 album, Nebraska.

The tune tells the story of a man named Joe Roberts, who is a mature and sensible highway patrolman. Joe has an unruly brother named Frankie, who is always running into trouble with the law and making things difficult for him and everyone else around him.

If you love listening to Bruce Springsteen, then you’ll want to check out our best karaoke songs of all time playlist, which features his hit, “Dancing In The Dark.”

Many famous artists have covered the song throughout the years, including Johnny Cash, Dar Williams, and Whitey Morgan.

“Boss Of Me” was the theme song on the TV show Malcolm in the Middle and is the band’s most successful commercial single to date.

This track speaks from a boy’s perspective as he’s addressing what seems to be his older brother or superior, saying they aren’t the boss of him anymore.

The punk rock song earned a Grammy Award for Best Song Written for a Motion Picture, Television, or Other Visual Media in 2002 and also peaked at #21 on the UK Singles Chart in 2001.

As they were just getting started in the music industry, indie rock band Art Brut released “My Little Brother” in 2004 as a standalone single.

The song focuses on Brut’s younger brother, who “just discovered rock ‘n roll” (which many believe could be referring to drugs).

As one of Brut’s earliest releases, “My Little Brother” didn’t gain much commercial popularity but still ended up charting at #49 in the UK.

“My Brother’s A Basehead” by American hip hop trio, De La Soul, was released on the CD version of their debut album, 3 Feet High and Rising, and actually caused a bit of tension in his family because of its drug references.

The lyrics describe the male narrator’s anger towards his older brothers’ addiction to drugs and how it destroyed their sibling relationship and their lives.

Although the tune didn’t get much air time, the band continued releasing music and eventually won a Grammy Award for their collaboration with Gorillaz on “Feel Good Inc.” in 2006.

This brother song was released from Bowie’s 1971 album, Hunky Dory, and details an imaginary relationship with his older step-brother, who suffered from schizophrenia.

If you’re a David Bowie fan, then you should take a look at our best happy songs playlist and listen to his song, “Heroes.”

“The Bewlay Brothers” is featured on the soundtrack of the 2015 film, Bitter Lake, and has been recorded by other artists, including Peter Murphy, Elbow, and John Howard.

Marvin Gaye released “What’s Happening Brother” as a beautiful tribute to his own brother, Frankie, who was a Vietnam War veteran who served for three years.

The song shares the story of a soldier who returns home from the battlefield and the struggles he faces when trying to adjust to living in a normal society again.

This great song was released from Gaye’s album, What’s Going On, which topped the Billboard Soul LPs chart and reached #2 on the Billboard Hot 100 in 1971.

“Blood Brothers” comes from Bryan’s 2013 album, Crash My Party, and features a male narrator who is reminiscing on the good times he spent with his brothers when he was growing up.

If you’re a fan of Luke Bryan, then check out our best summer songs playlist, which includes his song, “Country Girl (Shake It For Me).”

The Crash My Party album debuted at #1 on the Billboard 200 and Top Country Albums chart and was the third highest-selling album of 2013.

Swedish DJ, Avicii, released this dance hit on his debut album, True, in 2013, which is about a boy’s love for his siblings and how he’s always there to give them advice in life.

If you’re interested in learning more about Avicii, we suggest checking out our list of best DJ movies and documentaries ever made, which includes his documentary, True Stories.

“Hey Brother” took the top spot on the Billboard Hot Dance/Electronic Songs and Dance Club Songs charts in 2013 and 2014.

2. He Ain’t Heavy He’s My Brother – The Hollies

“He Ain’t Heavy He’s My Brother” was originally recorded by Kelly Gordon in 1969 and also became a hit for Neil Diamond in 1970.

This tune describes how the narrator feels a responsibility to figuratively carry his brother through a very difficult time in his life, because that’s what brothers are for.

“Brother” is an emotional song that talks about a boy’s best friend and their close bond, which feels more like a sibling relationship.

Now, the next time you need to tell your brother how much you care, you can share these special songs about brothers with him.

Although you both may fight sometimes, these tracks are a reminder of the unbreakable bond you share.

What’s the best song about brothers, in your opinion? Leave a comment below.