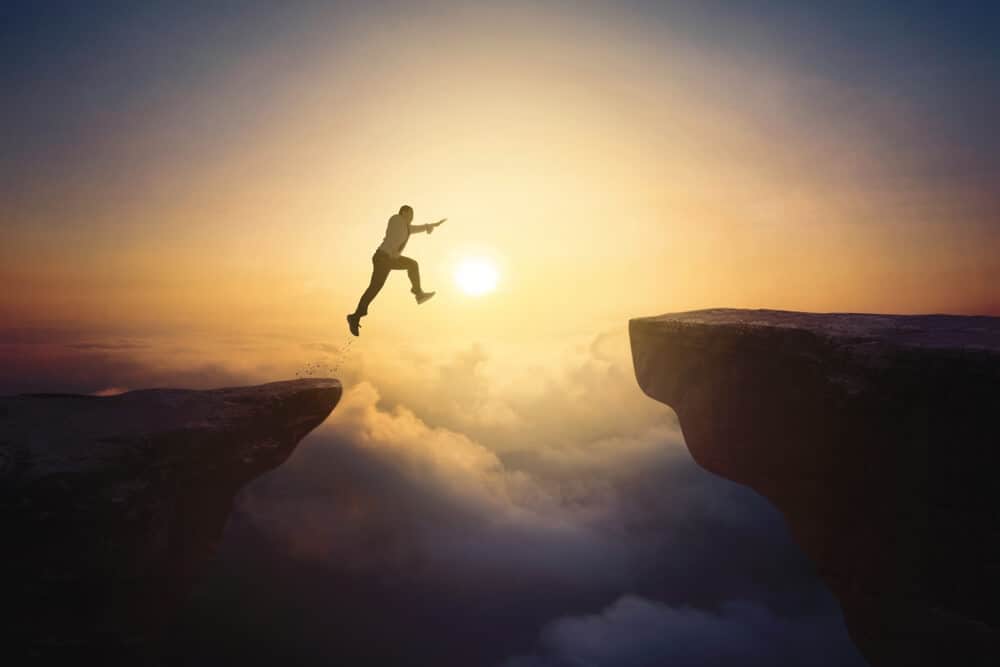 Songs about bravery offer a much-needed confidence boost when facing your greatest fears.

No matter who you are or where you’re from, you’ve felt afraid at some point in your life, and the feeling is universal.

Whether making a major life decision or trying to overcome a massive obstacle, we need the courage to make it through.

Thankfully, music can get you out of your head and pump you up to take on that next big challenge!

The 21 Best Songs About Bravery & Courage

It’s in our darkest moments when we have to dig deep and find the strength within, and that’s where music comes in.

Without further ado, here’s our playlist of the 21 best songs about bravery & courage:

Katy Perry is one of the most popular female singers in the world, and she’s no stranger to motivational anthems that revolve around self-empowerment and confidence.

This fantastic song encourages listeners to speak up for themselves, be bold, and remain steadfast in who they are no matter what.

“Roar” reached #1 on the U.S. Adult Pop Songs chart and was nominated for a Grammy for Song of the Year and Best Pop Solo Performance in 2014.

“Eye Of The Tiger” ranks among the best songs about bravery for its motivational lyrics and electrifying beat.

The pump-up jam from the Rocky III soundtrack tells listeners to never give up on their dreams and that nothing is impossible.

This wonderful anthem took the top spot on the Billboard Hot 100 and UK Singles chart in 1982 and won a Grammy for Best Rock Performance by Duo or Group with Vocal in 1983.

This tune is part of The Greatest Showman soundtrack, released in 2017 through Atlantic Records.

The lyrics feature a man telling his lover his dreams for the future and how he knows that if they work hard enough to achieve them, they’ll come true.

“Thunder” is one of the best happy songs of all time and was released on Imagine Dragon’s third studio album, Evolve, in 2017.

This track tells the story of a young boy who dreams of being a superstar and is made fun of but eventually makes it big.

This fun song was nominated for a Grammy for Best Pop Duo/Group Performance in 2017 and took the top spot on the Billboard Adult Top 40, Mainstream Top 40, and the Hot Rock & Alternative Songs chart that same year.

Sia has her fair share of empowering anthems, and this is another motivational song you’ll memorize in no time, thanks to its catchy and encouraging lyrics.

This electropop hit talks about perseverance and refusing to give up despite difficult circumstances, revolving around the line “I got stamina.”

“The Greatest” made it to #1 on the charts in multiple countries, including Belgium, Croatia, and Hungar,y and also charted #18 on the Billboard Hot 100 between 2016 and 2017.

Florence + The Machine, a widely popular English indie rock band, released “Shake It Out” as their first single from their second album, Ceremonials, in 2011.

The baroque pop song centers around the lyrics, “It’s hard to dance with a devil on your back, so shake him off.” The overall meaning is about breaking free from the regrets of the past.

“Shake It Out” received a Grammy nomination for Best Pop Duo/Group Performance in 2013 and reached #1 on the Billboard Adult Alternative Songs chart between 2011 and 2012.

“Rise Up” by Andra Day makes the list as one of the most motivating songs ever produced and was released from her debut studio album, Cheers to the Fall, in 2015.

This lovely song emphasizes the importance of rising up and continuing to fight against the obstacles in our lives.

Day’s album received raving reviews, garnering a Grammy nomination for Best R&B Album in 2016 and making it to #6 on the Billboard Top R&B/Hip-Hop Albums chart between 2015 and 2016.

14. Something Inside So Strong – Labi Siff

British singer-songwriter Labi Siff penned this wonderful song in 1987, which features a fusion of R&B and gospel.

“Something Inside So Strong” was inspired by a documentary on Apartheid in South Africa and emphasized the inner bravery within every African American person whose personal freedom is being stolen.

In 1987, the song won the Ivor Novello Award for Best Song Musically and Lyrically and peaked at #2 on the Irish Singles chart and #3 on the Netherlands Top 40 in the same year.

If country music is more your style, we suggest checking out “Live Like You Were Dying” by Tim McGraw.

The song is based on those diagnosed with terminal illnesses and how they gain a new perspective on life and seek to live it to the fullest.

As one of the best songs about bravery, “Live Like You Were Dying” became the longest-running country #1 hit of 2004. It also went on to win Single & Song of the Year at the CMA Awards and a Grammy for Best Country Song in the same year.

Bon Jovi rocked the world with this hit on their 2000 album, Crush, which helped the band reach a younger fanbase.

“It’s My Life” is one of the most well-known post-80s singles that speaks of living life to the fullest and never backing down when faced with challenges or enemies.

The track reached #33 on the Billboard Hot 100 and topped charts in Austria, Belgium, and Italy. The accompanying music video for “It’s My Life” is also one of their most viewed, exceeding over 1.1 billion views as of August 2022.

“I Won’t Back Down” is a heartland rock track from Tom Petty’s first solo album, Full Moon Fever, which came out in 1989.

The tune was inspired by Petty’s experience escaping his home after an arsonist attempted to burn it down with him inside.

If you’re a fan of Tom Petty’s music, we suggest checking out our best 80s songs playlist, which includes one of his top ten tunes, “Free Fallin.'”

10. Scars To Your Beautiful – Alessia Cara

Alessia Cara released this empowering jam from her debut studio album from 2015, Know-It-All.

“Scars To Your Beautiful” is a self-love anthem about the high societal standards young women have to meet to feel beautiful.

The tune peaked at #8 on the Billboard Hot 100 and topped the Billboard Adult Top 40, Adult Contemporary, Dance/Mix Show Airplay, and Mainstream Top 40 charts between 2016 and 2017.

“Fight Song” easily makes the list of the best songs about bravery because of its inspirational lyrics and encouraging message about overcoming fear.

Rachel Platten wrote the track during a rough patch in her life when she was struggling to make it in the music industry and how she chose not to give up.

This chart-topping hit quickly became a worldwide anthem, peaking at #6 on the Billboard Hot 100 and reaching the top ten in Australia, Canada, New Zealand, and Ireland in 2015.

“Hall Of Fame” is among the most motivating pop ballads the music industry has to offer! It’ll surely get you pumped up for whatever you’re getting ready to face.

The track talks about pursuing your dreams no matter what stands in your way and how doing so can positively impact the world around you.

This popular tune from The Script and will.i.am made it to #1 in Austria, Ireland, Scotland, and the UK, while also peaking at #13 on the Billboard Adult Top 40 in 2012.

It certainly takes courage to step out of our comfort zones and be resilient in the face of hardships, but “Warrior” by Demi Lovato encourages us to do just that.

The powerful piano ballad focuses on how the difficulties we experience shape us into stronger people and tells the story of the singer’s struggle with mental illness, eating disorders, and self-harm.

If you’re looking for an upbeat song when life feels overwhelming, listen to “Don’t Stop Believin'” by the American rock band Journey.

The song’s lyrics explore a variety of hardships faced by separate people and encourages listeners to keep a positive attitude. And if you’re looking for one of the best karaoke songs of all time, “Don’t Stop Believin'” is the tune for you.

This track ranks among the best-selling songs of the 20th century, selling over 7 million copies, and reaching #8 on the Billboard Mainstream Rock chart in 1981.

“The Diary Of Horace Wimp” is from Electric Light Orchestra’s album, Discovery.

The lyrics tell the story of a man who longs to express his love for a girl he meets and eventually overcomes his shyness and marries her.

Sara Bareilles worked with Jack Antonoff from the band fun on this fun pop anthem and released it on her fourth studio album, The Blessed Unrest.

“Brave” is an inspirational song that encourages listeners to be who they are no matter what and not fear what people may think of them.

The track reached #3 in Australia and #23 on the U.S. Top 40 and received a Grammy nomination for Best Solo Pop Performance in 2013.

3. We Are The Champions – Queen

“We Are The Champions” is one of the greatest motivational songs ever written and is most often played at sporting events.

The tune talks about the exhilarating feeling of victory after fighting long and hard to win. If you’re a die-hard Queen fan, check out our best songs of all time playlist, which features their mega-hit, “Bohemian Rhapsody.”

“We Are The Champions” earned the #4 spot in the U.S. and #2 in the UK and became the official theme song for the FIFA World Cup in 1994.

2. I Will Survive – Gloria Gaynor

“I Will Survive” is often dubbed a song about women’s empowerment and describes a female narrator’s journey through a breakup and how she becomes resilient.

This anthem remained at #1 on the Billboard Hot 100 for three weeks and topped the Irish and UK Singles charts in 1979.

“Lose Yourself” was written specifically for the 2002 film 8 Mile, which features hip-hop artist Eminem as the main character, B-Rabbit.

The lyrics tell B-Rabbit’s story, an aspiring white rapper who struggles to make it in the music industry and gain the respect of his peers.

Another popular song of Eminem’s, which is featured on our best 90s songs playlist, is “My Name Is.”

When your strength is wearing thin, these songs about bravery can help you rise to the occasion and overcome your fears.

Eminem’s “Lose Yourself” makes the #1 spot on our list because of its powerful lyrics, uplifting beat, and exceptional accolades.

Whatever you’re facing today, we hope this list has inspired you to persevere and confront every difficult situation confidently!

What’s the best song about bravery, in your opinion? Leave a comment below.