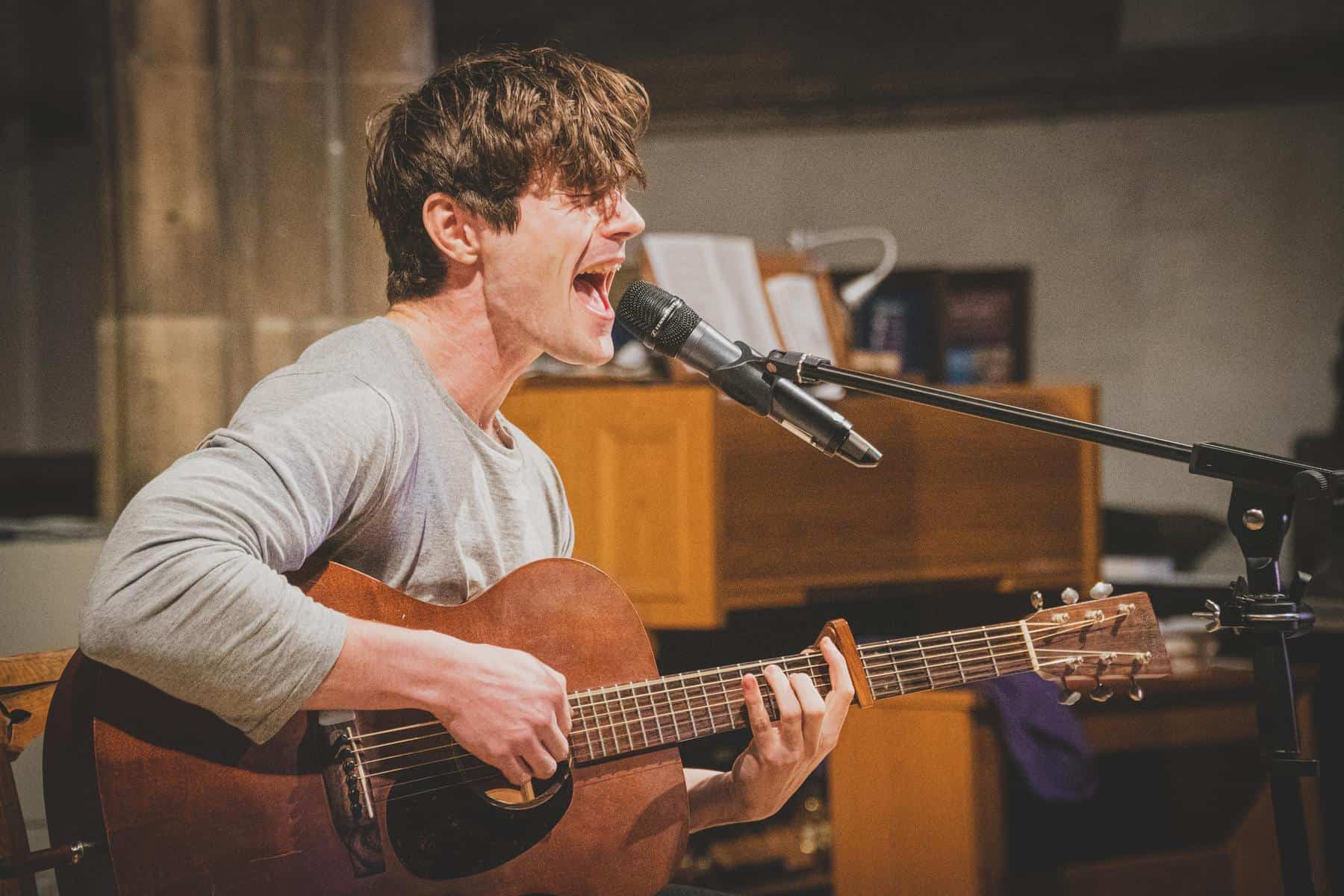 Long before auto-tune, a singer was a success based on how well they sang live. Freddie Mercury of Queen is a prime example.

He recorded terrific vocals in the studio and duplicated them live while entertaining fans. That’s impressive!

This standard would change. Enter Auto-Tune. This revolutionary software changed the music world. Producers could auto-tune an off-pitch note from a perfect take instead of scrapping it.

Contemporary producers use auto-tune to transform the human voice into something robotic. Others use it to make them flawless when singing live.

All of which begs the question, are there singers who don’t use auto-tune?

Before we dive into that answer, let’s get a better understanding of what auto-tune is.

The mastermind behind Auto-Tune is Dr. Andy Hildebrand.

Is he a renowned musician or music professor? No. He started as a research engineer in the geophysical industry for Exxon.

Had Andy not decided to return to his first love, music, auto-tune may have never been invented.

While researching ways to improve digital sampling, he stumbled upon a new looping process that led to the creation of Auto-Tune.

He was convinced there was a market for plug-ins, so he formed Antares Audio Technologies in 1996.

Over the company’s history, they created many plug-ins that are industry standards, one of which is Auto-Tune.

How Does Auto-Tune Work?

Auto-Tune software can be programmed to correct individual notes, automatically correct wrong notes, and create the “Auto-Tune effect.” Most often, the effect can be so natural that you’d never hear the correction.

On the flip side is the “Auto-Tune effect. ” This is what most associate with the software. It is a harsher sound and can alter the voice to sound like a robot, a chipmunk, or a monster.

Daft Punk’s “One More Time” is a great example of using auto-tune to affect the voice.

10 Singers Who Don’t Use Auto-Tune

Now that we know what auto-tune is let’s get back to the original question: what singers don’t use auto-tune?

With no further ado, here’s our list of the top 10 singers who don’t use autotune:

If you’ve never seen Ed Sheeran live, you need to. This British singer is a one-man-band. It’s just him, his guitar, some effect pedals, and a microphone.

His musical journey began in high school, where he learned guitar and began writing songs. Classmates noted his talent and voted him “most likely to be famous.”

After releasing a few self-produced EPs, it was his debut album + (pronounced “plus”) that launched his career.

The single “The A-Team” charted in the UK at number three and became the eighth-best selling single in 2011.

When he performs live, his vocals are spot on while he dazzles fans with guitar and keyboard .

He is also an actor, albeit he’s usually playing himself. Most notably is the movie Yesterday, in which he has some hilarious lines.

Critics and fans debate Ed Sheeran’s use of auto-tune. We suggest watching his performance at the 59th Grammy Awards.

Whatever you decide, we believe you’ll agree that his performance is spectacular!

The Houston native got her big break when Destiny’s Child hit the charts in 1997. Beyoncé started her solo career in 2002 with the release of a Jay-Z song, “03 Bonnie & Clyde.” Since then, her rise to fame has been mercurial.

Aside from her hit songs, she is also a gifted songwriter, activist, and businesswoman. But is her singing legit or enhanced by auto-tuning?

Grammy winner Carlos Santana has this to say on the matter:

Beyoncé does use auto-tune when recording but primarily as an effect when rapping to get a synthetic voice.

Pink credits Madonna and Janis Joplin as being her top musical influences. When you listen to Pink’s raspy, soulful vocals, you can hear these two icons in her styling.

Critics, fans, and peers agree that Pink is a stellar singer with a powerful, emotive voice.

When recording the song “Barbie’s,” her producer, Ross Golan, asked the engineer to turn off the auto-tune.

The engineer replied that it was off. Ross said, “I was sure the vocal was being manipulated — that’s how accurate it was. But she’s just that good.”

But does Pink use auto-tune live? We suggest watching her documentary, Pink: All I Know So Far, and decide for yourself. Spoiler alert: we watched it, and that’s why she made our list!

Alicia Keys is a classically-trained pianist who signed with Columbia Records at the ripe old age of fifteen as a songwriter/singer.

She later moved to Arista Records in 2001 and released her smash album, Songs in A Minor. The rest, they say, is history.

Not only can she sing, but she’s a talented songwriter, producer, instrumentalist, and arranger.

She used her classical music training as a bedrock to launch her R&B singing style as an artist. So gifted is Alicia that many critics dubbed her the new “Queen of R&B.”

As if this wasn’t enough, Alicia Keys is also an actor. Her first role was on The Cosby Show, and she has also appeared on Charmed and American Dreams.

In 2006, she hit the big screen in Smokin’ Aces and has been in The Nanny Diaries and The Secret Life of Bees.

And regarding using auto-tune, Alicia had this to say:

”I never use Auto-Tune, or anything like that. I won’t have that software in my life. I don’t mind others using it. But if I can’t sing on my own, then I’m not going to record it.”

This Nashville native garnished a recording contract in 2004, allowing her to showcase her teen-angst songs.

Taylor Swift released her breakthrough Country solo album in 2006 that included hits like “Our Song” and “Should’ve Said No.”

She crossed over into the pop market and released hit after hit. Taylor Swift has sold over 200-million records and has received a litany of awards.

As a vocalist, her style and ability have evolved and matured, earning praises from critics worldwide.

For years, Taylor Swift has denied using auto-tune. Proof of this would be some of her earlier performances in which she was off-pitch.

Had she been using auto-tune, then these imperfections wouldn’t have been noticeable.

Forever valiant, Taylor Swift would rather be known as an off-key singer than one who is inauthentic and relies upon auto-tune.

This singer was born in Hawaii in 1985 and named Peter Gene Hernandez. Peter changed his name to Bruno Mars. “Bruno” came from the nickname his dad called him.

He opted to drop “Hernandez” so music labels wouldn’t try to make him the next Latino star. “Mars” seemed to be the logical choice as he wanted to seem to be from another planet.

Musically, Bruno was influenced by Elvis, Prince, and The Police. He learned how to be a showman when doing childhood impersonations of Elvis with his dad’s group.

When you listen to Bruno Mars’ music, you’ll realize that it’s next to impossible to pigeonhole him into one musical category.

He’s a pro who can belt out R&B, soul, rock, and pop while entertaining crowds with his retro-vibe showmanship.

Bruno hit the charts in 2010 with the album Doo-Wops & Hooligans.

Hits from that album include “Just The Way You Are, “The Lazy Song,” and “Grenade.” The smash “Uptown Funk” became a worldwide phenomenon and spent fourteen weeks on Billboard Hot 100.

Does Bruno use auto-tune live? We couldn’t find a “smoking gun” one way or the other. Based on Bruno’s comments on the matter and his musicianship, we believe he’s the real deal.

Texas native Kelly Clarkson became a household name when she won American Ido in 2002. Her chart-topping hit, “A Moment Like This,” put her on the road to stardom.

Clarkson’s 2011 release Stronger earned her another Grammy. This made her the first artist to win Best Pop Vocal Album twice.

Her biggest selling hit was “Stronger (What Doesn’t Kill You).” To date, she has sold over 25-million albums and 45-million singles worldwide.

She has released books with Harper Collins in her spare time and has been a TV host on The Kelly Clarkson Show.

Critics say that Kelly has a complex voice that isn’t limited by range or inflection. Some even say she’s at her best when performing live.

When it comes to auto-tune, Clarkson isn’t shy about how she feels about it.

“There are cool effects you can do with it, but when they just use it to correct pitch, that piss­es me off, because it takes away the emotion.”

We’re not about to annoy this Texan, which is why she’s on our list!

This Florida native got her showbiz break in 2010 on the Nickelodeon show, Victorious.

As a vocalist, Ariana has been compared to Mariah Carey for her range and whistle style.

Her debut album, Yours Truly, had the chart-topping song “The Way.” Critics describe her voice as an artistic instrument that shines in pop, R&B, and hip hop genres.

When a fan accused her of using auto-tune, Ariana defended herself.

If you’re still a doubter, reach out to Ariana. She’ll swing by to prove it in your living room!

Canadian Shawn Mendes made a name for himself when discovered on the Vine app. He secured a recording contract with Island Records, and in 2015, the album Handwritten was released.

The hit single “Stitches” made Shawn the first artist to have a number one hit before turning eighteen.

He has won many awards and been nominated for several Grammy Awards.

Musically, Mendes falls in the pop and folk-pop genre. He credited John Mayer as a musical influence and classic rockers like Led Zeppelin and superstar country singer Garth Brooks.

Shawn is a gifted guitarist and writes most of his material. Whether he uses auto-tune live may be debatable. But listen to this YouTube compilation, and you’ll discover that Shawn can sing.

So if that’s the case, wouldn’t it prove he doesn’t need auto-tune?

Last but not least is Adam Lambert. Like Kelly Clarkson, he got his singing career moving by appearing on American Idol.

In 2009, he released his album For Your Entertainment that debuted at number 3 on Billboard. The hit single “Whataya Want from Me” also earned him a Grammy nomination for “Best Male Pop Vocal Performance.”

Remember our opening reference to Freddie Mercury? Queen’s lead guitarist, Brian May, took note of Lambert during a live concert.

May reportedly described Adam’s voice had “sensitivity, depth, maturity, and awesome range and power which will make jaws drop.”

It’s no wonder that in 2011, Lambert was asked to join Queen to become the band’s frontman and lead vocalist.

Does Adam Lambert use auto-tune? Do you really think Brian May and the boys would invite a wannabe to replace the late-great Freddie Mercury?

Like we stated at the start, in and of itself, auto-tune isn’t evil or a sign of “lacking artistic integrity.” It is a tool that can create amazing effects or tweak an off-pitch note. Try It For Free Get Free Plugins

The 25 Best Female DJs In The World

The 17 Best DJ Apps For iPhone