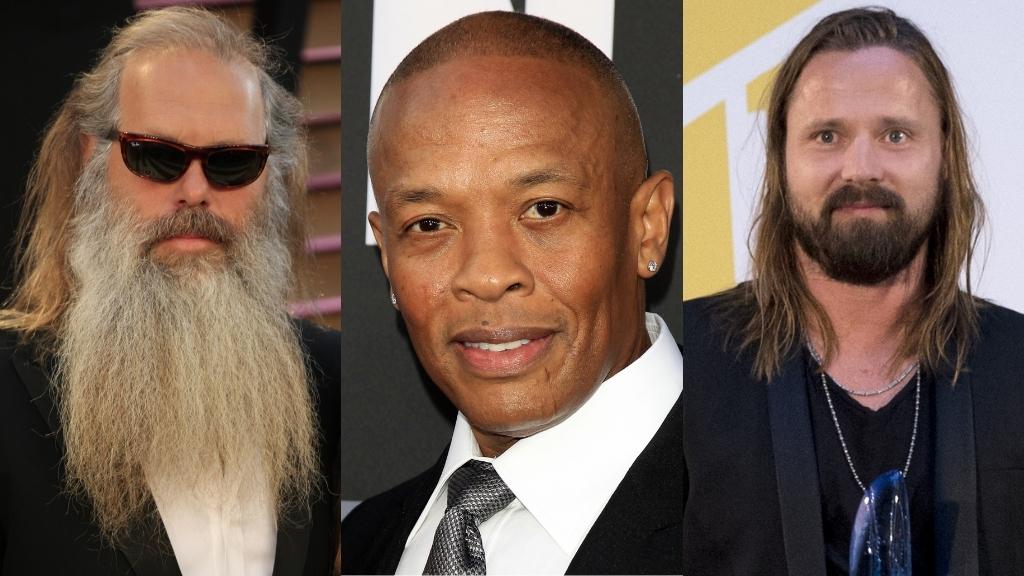 The richest music producers in the world have produced some of the greatest songs we all know and love while helping launch the careers of the biggest names in the industry.

In this article, we’ll walk you through how these titans of industry have shaped the music landscape into what it is today, earning millions of dollars in the process.

The 10 Richest Music Producers In The World

We’ve explored the star collaborations and record-breaking albums and singles that have contributed to the net worth of these music producers, making them the richest of all time.

Here’s our list of the 10 richest music producers in the world:

Mixer, engineer, and music producer Sylvia Massy got her break in the music industry through her work with Undertow, the multi-platinum album by Tool, released in 1993.

This followed her production experience on the comedy rock band Green Jello, which led to exposure to artists such as Johnny Cash, Tom Petty, and Prince.

Based in Los Angeles, Massy started her career working with Gary Kurfirst as an engineer and mixer for Radioactive Records. She has also worked with producer Rick Rubin on several projects.

Through Rubin’s label, American Records, Massy helped shape the sound that would go on to define acts such as Slayer, Powerman 5000, and the Black Crowes.

Her work on the album Unchained by Johnny Cash, one of the best country singers with deep voices, would go on to win a Grammy Award for Best Country Album in 1997.

Additional collaborations with bands such as Red Hot Chili Peppers, System of a Down, and the Brazilian band South Cry have helped push Sylvia Massy’s net worth to an impressive $2 million.

MNEK, whose real name is Uzoechi Osisioma “Uzo” Emenike, is a British music producer who started his career as a singer-songwriter in the early 2010s.

A producer since his teenage years, MNEK released several hit singles before being catapulted into the spotlight with his work on Gorgon City’s single, Ready For Your Love, in 2014.

The success of this and other early releases gave MNEK the exposure he needed to collaborate with some of the biggest artists in the music industry and expand his range and style.

Music production and engineering for some of the best female singers of all time followed, with MNEK producing for Madonna, Kylie Minogue, and Beyonce.

This work helped MNEK win several awards and nominations, picking up a Grammy Awards nomination for Best Dance Recording in 2014 for the track, Never Forget You.

Multi-instrumentalist, singer, and record producer Imogen Heap has had a long, successful career in the music industry, working on various unique and successful projects.

Beginning her career in the 1990s with experimental pop band Acacia, Heap enjoyed success with the collaborative project Frou Frou before moving into movie-related music production.

By the mid-2000s, Heap produced music for a range of television series, including Six Feet Under and The O.C., and established her record label Megaphonic Records.

Her impressive range of musicianship and engineering represents the highest level found in the best music production schools in the world, combining traditional instrumentation with the latest music software.

More recently, Imogen Heap found fame through her composition and production of the music for Harry Potter and the Cursed Child, displaying her skill on cello, guitar, drums, and piano.

American record producer and singer-songwriter Linda Perry is perhaps best known as a producer who works with singers that don’t use autotune, having begun her career with 4 Non Blondes in the late 1980s.

With a successful solo singing career, Perry has collaborated with some of music’s biggest rock stars, including Slash from Guns n Roses and Bryan Adams.

Her work as a producer began with pop-rock singer Pink in the early 2000s, leading to collaborations with artists including Courtney Love, Gwen Stefani, and Celine Dion.

A producer who understands the nuances of great vocal range, Perry’s work has also included tracks from top male talents such as James Blunt and Enrique Iglesias.

It’s an impressive roster of some of the industry’s most talented figures, with Perry’s rise to fame all the more noteworthy considering her early struggles with drug addiction.

Perry has also pioneered new approaches to music production; for instance, in 2011, working on a set of acoustic cover songs which she produced on her iPhone.

Finneas O’Connell is a record producer, singer-songwriter, and actor from America who is most commonly known for his production work with his sister, Billie Eilish.

As well as collaborating with Eilish, who’s now considered one of the most popular female singers in the world, O’Connell has produced music for Rebecca Black, Selena Gomez, Celeste, and Camila Cabello, receiving multiple awards and nominations.

His production skills on tracks by Eilish have won O’Connell Record of the Year two years in a row at the Grammy Awards for the tracks Everything I Wanted and Bad Guy.

In addition to his production work for other singers, Finneas O’Connell has enjoyed a distinguished solo music career, as well as serving as lead singer for the band The Slightlys.

He’s also worked with Beatles drummer Ringo Starr, one of the best drummers of all time, appearing on his 2021 EP Zoom In with contributions to the backing vocals on the track Here’s To The Nights.

Outside of the music industry, O’Connell has acted in films, including the comedy Bad Teacher, and had a recurring role in the television series Modern Family.

Known as “the fifth Beatle,” George Martin is widely regarded as one of the greatest music producers of all time and is often credited as the driving force behind the Beatles’ success.

During his time as the producer for the Beatles, Martin helped the band with some of the most iconic orchestrations in rock history, delivering complex arrangements that elevated their music to new heights.

This included producing some of the best songs of all time, such as Hey Jude, Strawberry Fields Forever, and Yesterday, each of which became chart-topping hits on their initial release.

A consummate arranger, composer, and audio engineer, George Martin also worked with other artists as well as the Beatles, including Elton John, Celine Dion, and Kenny Rogers.

Outside of the world of pop, Martin’s contributions to movie soundtracks remain strong to this day, with his work on the James Bond series.

Additional collaborations with outstanding musicians, for instance, with Pete Townshend on the stage production of Tommy, led Martin to achieve a net worth of $65 million.

Nile Rodgers began his career in the music industry as a touring musician for the Sesame Street stage show before co-founding Chic and becoming a world-renowned music producer.

He’s worked with some of the world’s most successful bands and singers, releasing multi-platinum selling singles and albums through the biggest record labels in the world, such as Atlantic and Virgin records.

His production work in the 1980s includes releases with Madonna, Diana Ross, and David Bowie, with Bowie’s Let’s Dance becoming the star’s biggest selling release of his career.

By the 1990s, Rodgers was branching out his scope of production into cinema work, with music for films such as Cool World and Thelma and Louise further enhancing his reputation.

With three Grammy Awards under his belt and a stint as the Songwriter’s Hall of Fame chairman, Nile Rodgers has secured his place as one of the best music producers in the world.

The third richest music producer in the world, Rick Rubin, is the former co-president of the illustrious record label Columbia Records, contributing to his immense net worth of $250 million.

His early career saw Rubin working for Def Jam records with artists such as LL Cool J, Public Enemy, and The Beastie Boys before moving into rock-oriented production with American Recordings.

This period of Rubin’s career included work with artists such as Mick Jagger, Tom Petty, and Metallica on some of their most iconic releases, cementing his reputation as one of the hottest producers in the world.

After moving to Columbia, Rubin helped launch the careers of Linkin Park and won awards for his work with Red Hot Chili Peppers, U2, Green Day, and Neil Diamond.

As well as being one of the world’s richest music producers, Rubin encourages others to explore their creative side through his popular Instagram account, offering aspiring producers tips on par with some of the best online music production courses available.

Max Martin is the second richest music producer in the world and has worked with numerous household names, including Britney Spears, The Backstreet Boys, and Celine Dion.

An adept music producer who excels in the most popular music genres, Martin has produced a lengthy list of hit tracks that have frequently topped the charts worldwide.

He first broke through into the mainstream with his work for Celine Dion after producing tracks for lesser-known artists in his home country of Sweden.

This success led to collaborations with artists including Katy Perry, Pink, Christina Aguilera, and Avril Lavigne, who all speak highly of his talented creative process.

Max Martin has picked up numerous awards and nominations for his music production skills, including several ASCAP Pop Music Awards for Songwriter of the Year and five Grammy Awards.

He was also nominated for an Academy Award for the Best Original Song, Can’t Stop This Feeling, featured in the movie Trolls and includes vocals from Justin Timberlake.

Widely regarded as one of the best music producers of all time, Dr. Dre has produced songs for a broad range of artists and helped define hip-hop.

He first came to widespread attention through his association with Death Row Records, in an era that would define the hip-hop music scene with some of the best 80s songs and best 90s songs.

Dre moved beyond simply performing his music and focused on production early in his career, working in the studio to produce albums for artists such as Nate Dogg, Kurupt, and Mary J. Blige.

Over the years since, Dr. Dre has worked on some of the biggest selling albums of all time, notably in the world of West Coast rap music, which has helped him amass his fortune.

Much of this wealth has come through his business ventures, including his Beats By Dre line of headphones, which he sold to Apple for $3 billion in 2014.

He’s also worked as a film producer on the movie Straight Outta Compton, which tells the story of the early years of the N.W.A. and their rise to fame.

An icon of hip hop and the man responsible for the success of some of the music industry’s most talented performers, Dr. Dre has earned his place as the richest music producer in the world.

That wraps up this guide to the richest music producers in the world, covering the collaborations and hit songs that earned them their impressive net worth.

As their fortunes fluctuate over time, we’ll update this list to reflect the most accurate information, so be sure to check back in the future.

Who is your favorite music producer? Leave a comment below.

The 25 Most Popular Female Singers In The World

The 10 Best Music Producers of All Time

Andy has been producing music since the early days of Cubase and spent much of the 2000s mixing house and techno with his trusty Technics 1200s. Fast forward two decades, you'll find him in his home studio experimenting with the latest music production software, tinkering with Ableton plug-ins, and occasionally trying (and failing) to complete Cuphead for the hundredth time.