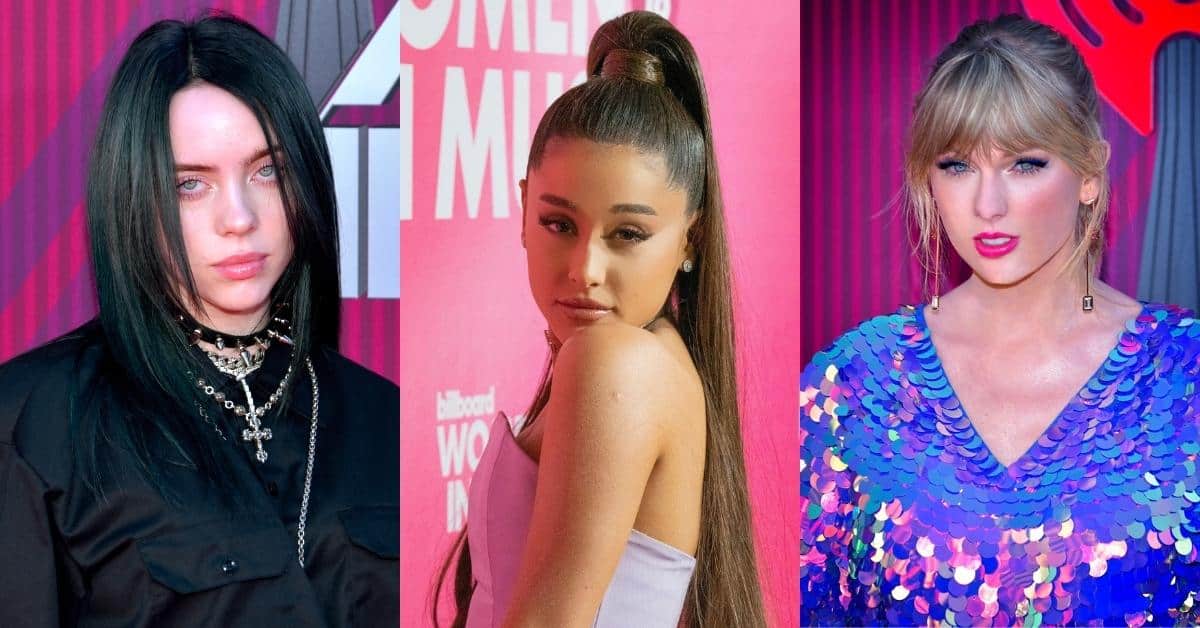 Many of the greatest hits ever recorded were sung by popular female singers with powerful vocals and a captivated stage presence.

The ladies included in this list have shared their incredible pipes and songwriting skills and made their mark on each genre, from pop and country to R&B and rap.

Although the music industry is full of extremely talented women, these gals have truly made a name for themselves, earning countless amounts of applause and prestigious awards.

The 25 Most Popular Female Singers In The World

We’ve listened to lots of skilled female vocalists from different countries and genres, and we’ve finally determined who reigns supreme, in our opinion.

So without further ado, here’s our list of the 25 most popular female singers in the world:

She’s also considered to be one of the best female singers of all time due to her impressive vocal abilities and long-standing career.

She was born on March 30th, 1968, in Charlemagne, Quebec, and rose to fame after winning two popular song festivals.

Once she signed a record deal in America, she began releasing hits like “The Power of Love,” “My Heart Will Go On,” and “I’m Your Angel.”

Bleta Rexha (known as Bebe Rexha) is a pop singer and songwriter born in Brooklyn, New York, on August 30th, 1989.

She signed a contract with a talent scout after winning a “Best Teen Songwriter” award, and in 2013, scored a record deal with one of the biggest record labels in the world, Warner Bros. Records.

A few of her most recognized hits include “I Can’t Stop Drinking About You,” “In The Name of Love,” and “Meant To Be.”

South Korean singer, songwriter, and actress, Lee Ji-Eun, was born on May 16th, 1993, and performs as IU.

She trained at Good Entertainment alongside other aspiring female artists and, in 2007, signed with LOEN Entertainment.

IU’s single, “Good Day,” was highly successful, as well as her others, “Hold My Hand” and “You And I.”

Shakira Isabel Mebarak Ripoll was born on February 2nd, 1977, in Barranquilla, Columbia. She is commonly referred to as the “Queen of Latin Music.”

Shakira is one of the best-selling music artists of all time, having sold over 80 million records. She has won three Grammies, twelve Latin Grammies, and seven Billboard Music Awards.

Miley Cyrus was born Destiny Hope Cyrus on November 23rd, 1992, and is best known for her raspy voice.

When she was thirteen, she starred in the Disney Channel TV show Hannah Montana and signed with Walt Disney Records and Hollywood Records.

Some of her greatest hits include “The Climb,” “Best Of Both Worlds,” ” and “We Can’t Stop.” Cyrus has also featured on our best karaoke songs playlist with her song, “Wrecking Ball.”

Cyrus has obtained the most Billboard 200 top-five albums from any female artist in the 21st century. She has also earned six Nickelodeon Kids’ Choice Awards, two MTV Europe Music Awards, and one People’s Choice Award.

Lady Gaga was born Stefani Joanne Angelina Germanotta on March 28th, 1986, in Manhattan, New York. Her unique style, personality, and vocal skills have made her a worldwide sensation.

Teenage Gaga began singing at open mic nights and, in 2007, was signed to Streamline Records. Some of her most famous tracks include “Just Dance,” “Bad Romance,” “Born This Way,” and “Paparazzi.”

Katheryn Elizabeth Hudson, known professionally as Katy Perry, is an esteemed actress, singer, and songwriter. She was born on October 25th, 1984, in Santa Barbara, California.

After moving to L.A. at 17, she signed with various record labels, including Java Records, Columbia Records, and Capitol Records. A few of her biggest hits are “Firework,” “California Gurls,” and “Roar.”

P!nk, whose real name is Alecia Beth Moore, was born on September 8th, 1979, in Doylestown, Pennsylvania, and is known for her rebellious demeanor and rock-style vocals.

At 14, she joined an R&B group, Choice, which signed a record deal with LaFace Records soon after.

P!nk then left the band to pursue a solo career, releasing hits like “Get The Party Started,” “Just Like A Pill,” “Family Portrait,” and “Just Give Me A Reason.”

Robyn Rihanna Fenty was born on February 20th, 1988, in Saint Michael, Barbados, and is a pop icon, fashion designer, actress, and businesswoman.

At 15, she auditioned for an esteemed music executive during her time with a girl group and scored a solo record deal with Def Jam Records.

Rihanna’s greatest hits include “Pon de Replay,” “Diamonds,” “Unfaithful,” and “Hate That I Love You.” Her smash hit, “Umbrella,” also made our best songs of all time playlist, which earned her one of her Grammy Awards.

The pop star is the second-best-selling female singer of all time, selling over 250 million records. She has won nine Grammies, thirteen American Music Awards, and the NAACP’s President’s Award.

After many unsuccessful attempts at making it big, Max finally scored a record deal with Atlantic Records in 2016.

Her hit single, “Sweet But Psycho,” was a major success, along with her songs, “Kings & Queens” and “My Head & My Heart.”

In 2012, Cabello auditioned for The X Factor and joined the girl group, Fifth Harmony. In 2016, she left to pursue a solo career and released hits including “Havana,” “Never Be The Same,” and “I Know What You Did Last Summer.”

Lovato rose to fame after starring as Mitchie in the 2008 Disney film Camp Rock. After the film, she signed with Hollywood Records and released popular hits, including “Don’t Forget, “Skyscraper,” and “Heart Attack.”

Ashley Nicolette Frangipane (A.K.A. Halsey) was born on September 29th, 1994, in Edison, New Jersey, and is known for her unique singing voice.

At 17, Halsey attracted attention after self-releasing music on social media. In 2014, she chose to sign with Astralwerks. A few of her most popular tunes are “Colors,” “Bad at Love,” and “Without Me.”

Carrie Marie Underwood is originally from Muskogee, Oklahoma, and was born there on March 10th, 1983.

She’s one of the best female country singers of all time, claiming fame with her belting and impressive vocal range.

In 2005, she won the fourth season of the popular TV singing contest, American Idol. Some of her most successful songs are “Jesus, Take The Wheel,” “Before He Cheats,” and “Good Girl.”

In 2016, Lisa joined the South Korean girl group, Blackpink and released mega-hits like “Whistle” and “Boombayah.”

In 2021, she went solo and released her hit single album, Lalisa, which sold over 736,000 copies in the first week. Both songs, “Money” and “Lalisa,” were highly successful.

Sia Kate Isobelle Furler (known as Sia) was born on December 18th, 1975, in Adelaide, South Australia, and is known for her distinctive style and vocals.

After starring as Alex Russo on Disney’s Wizards of Waverly Place, she signed with Hollywood Records and released hits such as “Come & Get It,” “Good for You,” and “We Don’t Talk Anymore.”

Beyoncé Knowles-Carter achieved stardom with her impressive vocal range and was born in Houston, Texas, on September 4th, 1981.

She is widely regarded as one of the best black female singers of all time because of her incredible vocal range and singing ability, and career success.

In 1995, she joined the girl group Destiny’s Child, and in 2003, she left to pursue a solo music career, releasing chart-topping hits like “Baby Boy,” “Halo,” and “Crazy in Love.”

After releasing hip hop music on SoundCloud in her teenage years, she acquired record deals from Kemosabe and RCA Records. Her famous hits include “So High,” “Mooo!,” “Say So,” and “Kiss Me More.”

Olivia Isabel Rodrigo is a singer, songwriter, and actress born in Murrieta, California, on February 20th, 2003.

She starred in Disney’s High School Musical: The Musical: The Series, and in 2020, signed with Geffen and Interscope Records.

Her debut single, “Drivers License,” was one of the best-selling songs of 2021, while “Deja Vu” and “Good 4 U” also became top hits.

The young singer has achieved one American Music Award, seven Billboard Music Awards, and was Time’s 2021 Entertainer of the Year.

Solo artist Dua Lipa was born in London, England, on August 22nd, 1995, and is recognized for her signature disco-pop sound.

In 2014, she signed with Warner Bros. Records and began releasing some of her most successful songs, like “One Kiss,” “New Rules,” “Don’t Start Now,” and “Levitating.”

Adele Laurie Blue Adkins is a British-born singer-songwriter known for her vocal control and soulful voice.

After attending music school, she signed to XL Recordings and released her debut solo album, 19. Her most recognizable hits are “Someone Like You,” “Rolling in the Deep,” “Set Fire to the Rain,” and “Hello.”

Adele has won fifteen Grammies, twelve Brit Awards, and two Ivor Novello Awards, among many others.

Taylor Alison Swift is a multi-genre American singer and songwriter who is famous for her narrative songwriting and was born on December 13th, 1989, in West Reading, Pennsylvania.

As a teenager, Swift signed songwriting and recording contracts with Sony/ATV Music Publishing and Big Machine Records. Her hits include “Our Song,” “Love Story,” “You Belong With Me,” and “Shake It Off.”

Taylor Swift is one of the best-selling musicians of all time and has won eleven Grammies, one Emmy Award, thirty-four American Music Awards, and fifty-eight Guinness World Records.

Billie Eilish Pirate Baird O’Connell (known as “Billie Eilish”) was born on December 18th, 2001, and is recognized for her pure, soft vocals.

At a young age, Eilish began releasing music with her brother. Her debut single, “Ocean Eyes,” led to record deals with Darkroom and Interscope Records. Her hits include “Bad Guy,” “Happier Than Ever,” and “When The Party’s Over.”

The American singer is one of the most popular female singers of the era, winning accolades including seven Grammies, three Brit Awards, one Golden Globe Award, and one Academy Award.

She’s arguably the most popular singer in the world and one of the hottest female singers right now (in our opinion), known as one of the greatest in the music industry for her four-octave vocal range and impressive runs.

At 15, she scored a role in Nickelodeon’s TV series, Victorious, and in 2011, she signed with Republic Records. Some of her most popular songs include “The Way,” “Break Free,” and “Thank U, Next.”

Let’s hear it for the girls! These are the most popular female singers in the world today, and we think they deserve a big round of applause.

The next step is to add their hits to your playlist. Happy listening!

Who’s your favorite popular female singer? Leave a comment below.

The 25 Most Popular Singers In The World

The 10 Richest Music Producers In The World