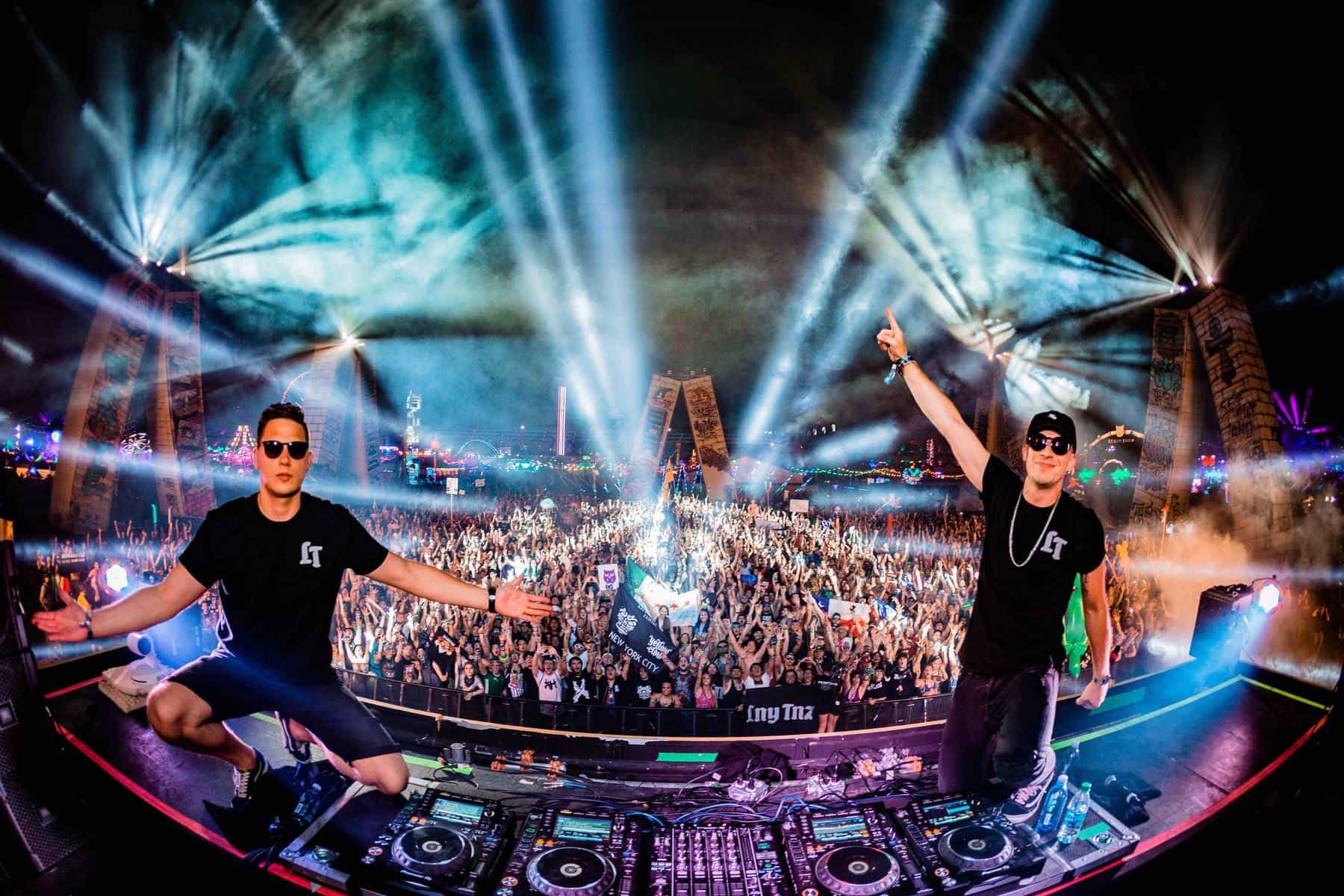 It’s becoming more and more common to see a DJ duo behind the decks, performing at clubs and festivals across the globe.

But how do DJ duos work?

In this article, we’ll look at all of the aspects of a duo partnership, but first, it’s important to understand how DJ duos work, and how does DJing works when performing as a partnership?

DJ Duos – How Does DJing Work? 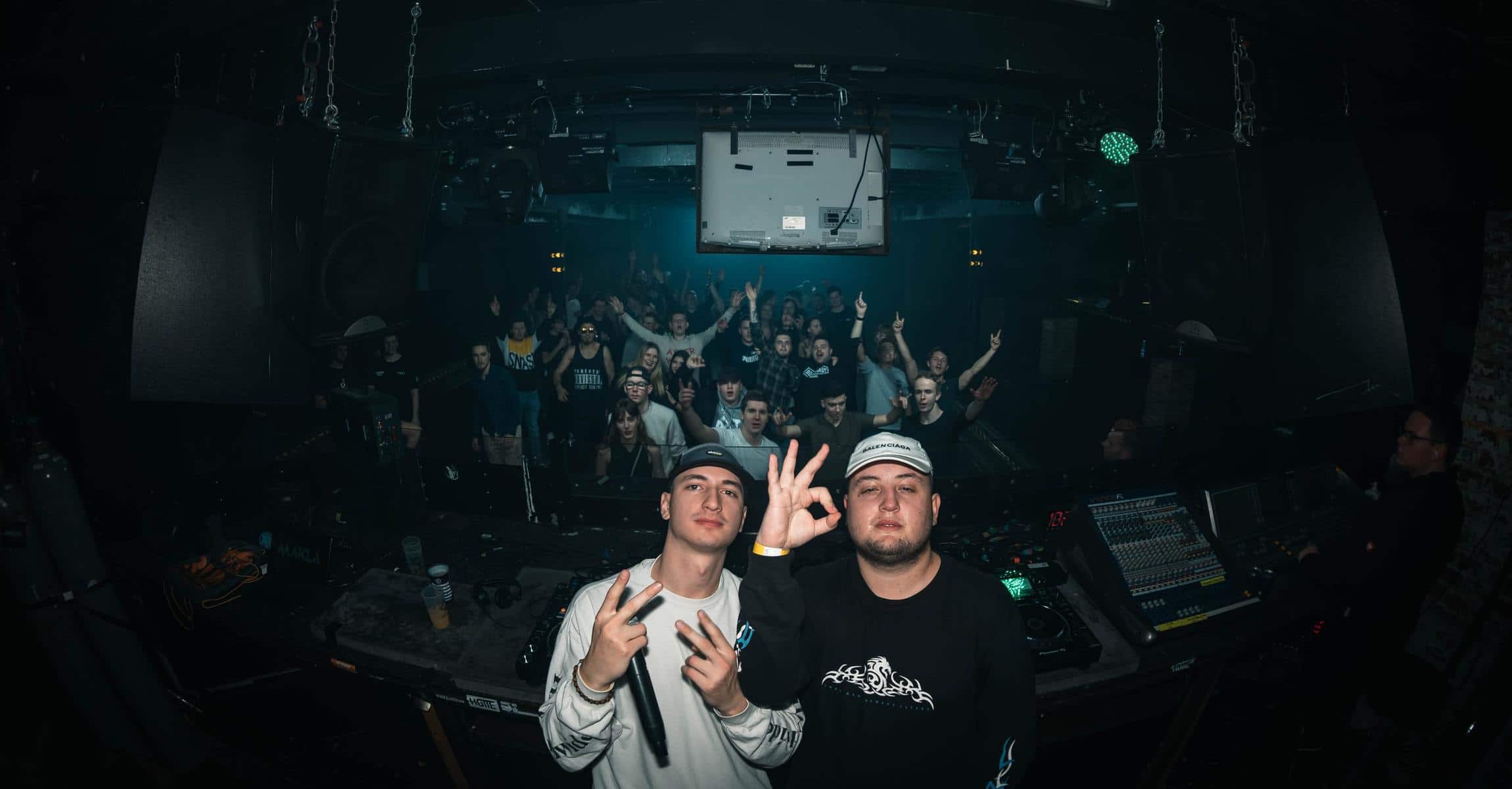 As the saying goes, “Two heads are always better than one,” which rings particularly true for DJ duos.

There’re a number of ways that DJ partnerships create successful DJ sets, and adding extra energy and multiple musical layers is only part of the answer to how Djing works as a DJ Duo.

Each member of a DJ Duo will not only be great friends, but they will also likely have compatible personalities that will encourage and motivate each other.

After all, they spend a lot of time together in the studio, DJing practice for DJ sets, and of course, touring festivals and clubs worldwide to perform.

Besides being rock-solid homies, there’s a myriad of technical elements that go into DJ duo sets, from careful curation of the setlist to a deep understanding of each other’s musical tastes and mixing style.

Benefits Of Being A Duo 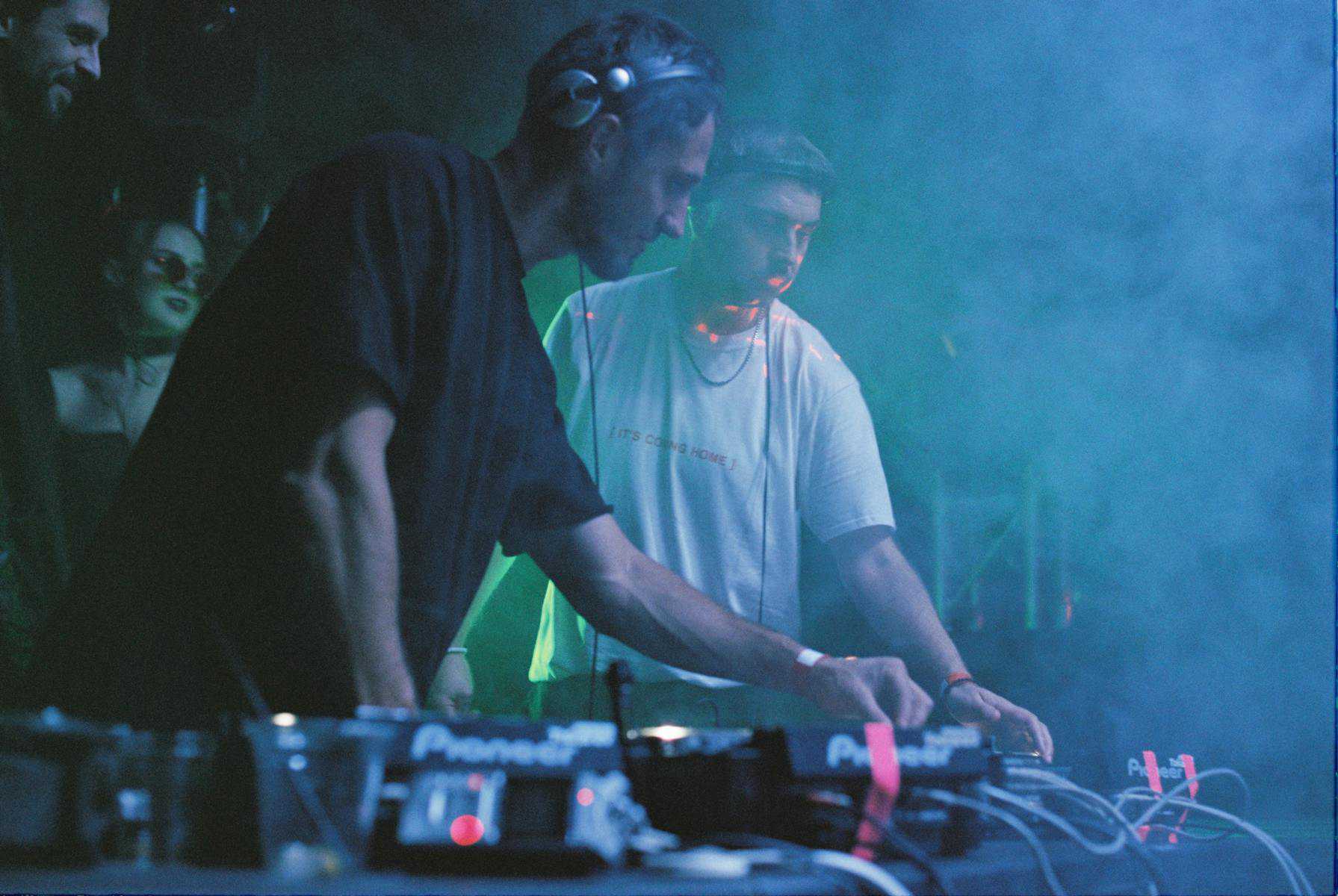 There’re a number of reasons why the best duos are so successful, and there are internationally recognized examples in every genre of electronic music.

One of the most important aspects is that they share their extensive range of skills and musical knowledge.

Either behind the decks, in marketing and management, or in the studio for those DJ/producers out there, two heads are always better than one.

Another benefit is the amount of time they can spend connecting with their audience. The best duos are well known for bringing high-energy and focused DJ sets to crowds that can be in their 100,000s!

Duos have the ability to focus on multiple aspects of performing, and one could walk away from the decks and perform to the crowd, bringing additional participation with the audience.

Another consideration that benefits duos is that of friendship. DJs spend a lot of time away from family and friends while touring, and having a close companion to work and socialize with also creates a bond that’s hard to find for solo DJs who tour independently.

Here are four typical technical setups for DJ duos, along with explanations of how DJing works in these partnerships. 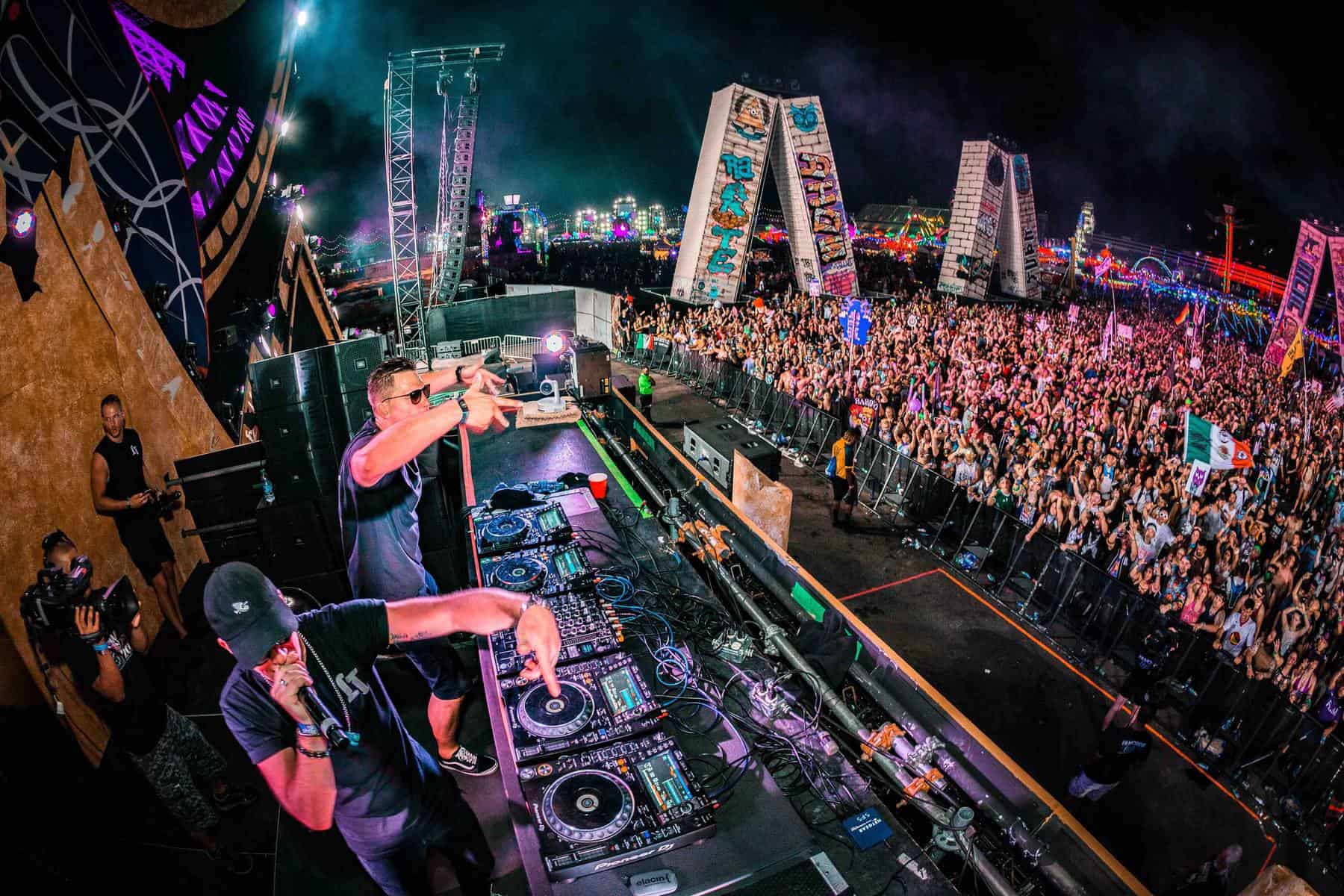 If you’ve ever attended a club or festival and seen more than one DJ twiddling away behind the decks, you’ve likely experienced a B2B DJ set.

This is a very common occurrence in the DJ scene and involves two or more DJs taking turns to mix tracks ‘back-to-back’.

Usually, a DJ duo will take turns mixing 2-3 tracks each before the other DJ will step in. This adds diverse musical tastes to a mix and allows for DJs to mix genres and style, adding creativity throughout a DJ set.

B2B DJ sets can be planned or completely improvised, and often DJs will collaborate on the fly and bring a fantastic surprise element to the fans, and often each other!

Improvised B2B sets can have varying levels of success that depend on the DJs who perform and how well they know each other, their musical tastes, and strengths as a performer.

Famous DJ duos that B2B includes EDM superstar DJs and brothers Dimitri Vegas ; Like Mike, who are internationally renowned for bringing high-energy EDM DJ sets to their fans worldwide. The brothers have won numerous awards and been recognized as a top DJ duo for many years.

A famous trio of DJs who often perform together in a B2B2B (back-to-back-to-back) performance is Dubfire, Nicole Moudaber, and Paco Osuna.

While all three have internationally acclaimed solo careers as techno DJs, the trio is often seen at large festivals or events performing stunning techno sets with all three artists contributing.

Another common example of how the best DJ duos work together is by using double decks.

This is where each DJ will have their own set of decks and will mix 2 or more tracks at the same time, creating a layering of tracks whilst also varying their technical approach of mixing (transitioning) between tracks.

This type of setup is very common at large music events or festivals where touring DJs rely on the equipment provided at the gig by the organizers.

A double-deck setup requires little additional equipment or setup for a duo to start their performance and is often a preferred way for duos to perform while on tour.

Using double decks allows for twice the amount of tracks to be mixed, with some duos mixing with all four decks at the same time.

Mixing with so many decks allows for a huge amount of flexibility and variety in the sounds and flow of the music in their DJ sets.

Duos are well versed in bringing heightened energy to DJ sets by layering multiple tracks and adding FX to create builds and drops to engage the audience.

It is very common that duos are also a production duo. These electronic music duos create their own tracks in a studio for commercial release on a record label.

Often referred to as DJ/production duos, they are often lifelong friends and combine their personalities, musical talents, and expertise to create world-class music that they then perform within their DJ sets.

DJ Producer duos will have a longstanding respect and understanding of each other’s musical tastes and draw on individual strengths while also inspiring each other.

They will bounce ideas off each other both during DJ sets and in the studio when producing, and the result is often a more diverse and layered approach to the electronic music they create as a production duo.

DJ and electronic music duos will often bring a host of musical skills to the relationship, with one DJ being more technically minded and structured, while the other member being more creative and eccentric.

This diversity allows for great creative flow in the studio when producing as a duo, and this also translates to DJ duo sets.

DJ and production duos are often great problem solvers and combine two individual sets of skills and technical know-how compared to a sole DJ or producer who relies on their individual talent.

This gives DJ and producer duos an edge both creatively and technically, as an extra set of hands goes a long way when in the studio or on tour.

It’s also common that duos share non-DJ-related tasks. One can have a managerial role, focusing on marketing, organizing, and booking trips and hotels, while the other can focus on creating a musical setlist and scope out the best places to eat in town before the gig!

In recent years, one of the most common ways for a DJ duo to perform is when they DJ a live set.

Live set DJing is different from traditional DJing as they will use a range of MIDI controllers and a laptop with DJ software such as Traktor or Ableton Live to create electronic music on the fly.

Within every genre of electronic music, there are many world-famous duos that please their millions of fans by creating intense sets at music events and festivals.

One of the most famous that crosses through many electronic genres is Daft Punk.

Daft Punk – The Kings Of The DJ Duo Kingdom

With over 50 years of combined musical experience between them, the French duo formed in 1993 and was comprised of Guy-Manuel de Homem-Christo and Thomas Bangalter.

With roots stemming from the underground rave scene in Paris, the duo quickly found fame with their signature performances fueled by house-music and experimental use of drum machines.

Their debut album ‘Homework’ was signed by Virgin Records in 1997 and quickly propelled the duo into newfound fame and into previously uncharted territory for electronic musical duos.

The duo went on to create 4 more albums, seamlessly threading between musical genres and styles, from pop, house, electro, and even producing sci-fi-themed musical scores for the film Tron.

They quickly gained international fame, which was cemented with the release of the Alive album and subsequent ALIVE 2006/2007 tour, where the duo performed 48 dates worldwide.

The performances were hugely successful and are often credited for bringing dance music to the mainstream, particularly in the US.

Sadly, on February 22nd, 2021, the duo released a video titled ‘Epilogue’ on YouTube to their 4.5 million fans and subscribers, announcing Daft Punk’s retirement, leaving behind a musical legacy that spanned over three decades and was emblazoned with numerous music awards and accolades.

Some other famous duos in the House/Techno and Electronica genres are listed below:

Some of the most famous DJ Duos in the world are EDM duos, and these DJs have taken the world by storm since the early 2010s with the explosion in popularity of EDM music.

Many EDM duos form after one or both artists attain stardom in their own individual careers and later create an EDM DJ duo based on similar music styles and tastes.

A good example of this is the duo Duck Sauce which consists of American DJ Armand van Helden and Canadian DJ A-Trak.

Other big-name EDM duos began as good friends with common musical interests that led them to perform as a DJ Duo. One such example is the award-winning and internationally recognized group, The Chainsmokers.

Here’s a list of some of the hottest EDM DJ duos worth keeping an eye out for when the next festival season begins!

Some of the most famous and respected DJ and electronic duos are female. These best female DJs dazzle their fans with their music selection and razor-sharp mixing skills.

In the EDM world, famous Australian DJ duo and twin sisters Nervo light the stage on fire with their high energy and elaborate DJ sets.

They perform at some of the world’s biggest festivals, such as Tomorrowland, Road to Ultra, and have held DJ residencies at world-famous clubs like USHUAIA in Ibiza.

Another famous sisterhood in the EDM genre is Krewella. The two sisters formed Krewella in 2007 and are from Illinois.

Their sound is mainly described as EDM and has also influenced many electronic sub-genres, including electro, dubstep, drum and bass, trap music, and future bass.

Krewella has performed at numerous international festivals and released a number of original tracks that music critics have received well all over the world.

From a friendly face whilst on the road touring to sharing technical skills and musical expertise, there’re plenty of reasons why a two DJ setup works so well.

They often have more musical experience to draw ideas from and bounce creative ideas and inspiration from one member to the other.

DJ duos are amongst some of the biggest and most famous names in the electronic music industry, highlighting their exceptional musical talents that are shared to construct a collaborative effort when it comes to performing and managing their DJ careers.

If you’ve ever thought of joining forces with a friend or musical peer and forming a DJ duo, one thing to ensure a productive and healthy DJ duo career is communication and participation.

Both of you should draw on your own strengths while inspiring the other to create and perform the best music you possibly can!

Who’s your favorite DJ duo? Leave a comment below.

How To Come Up With A DJ Name?

DJ Vs Producer: What’s The Difference?