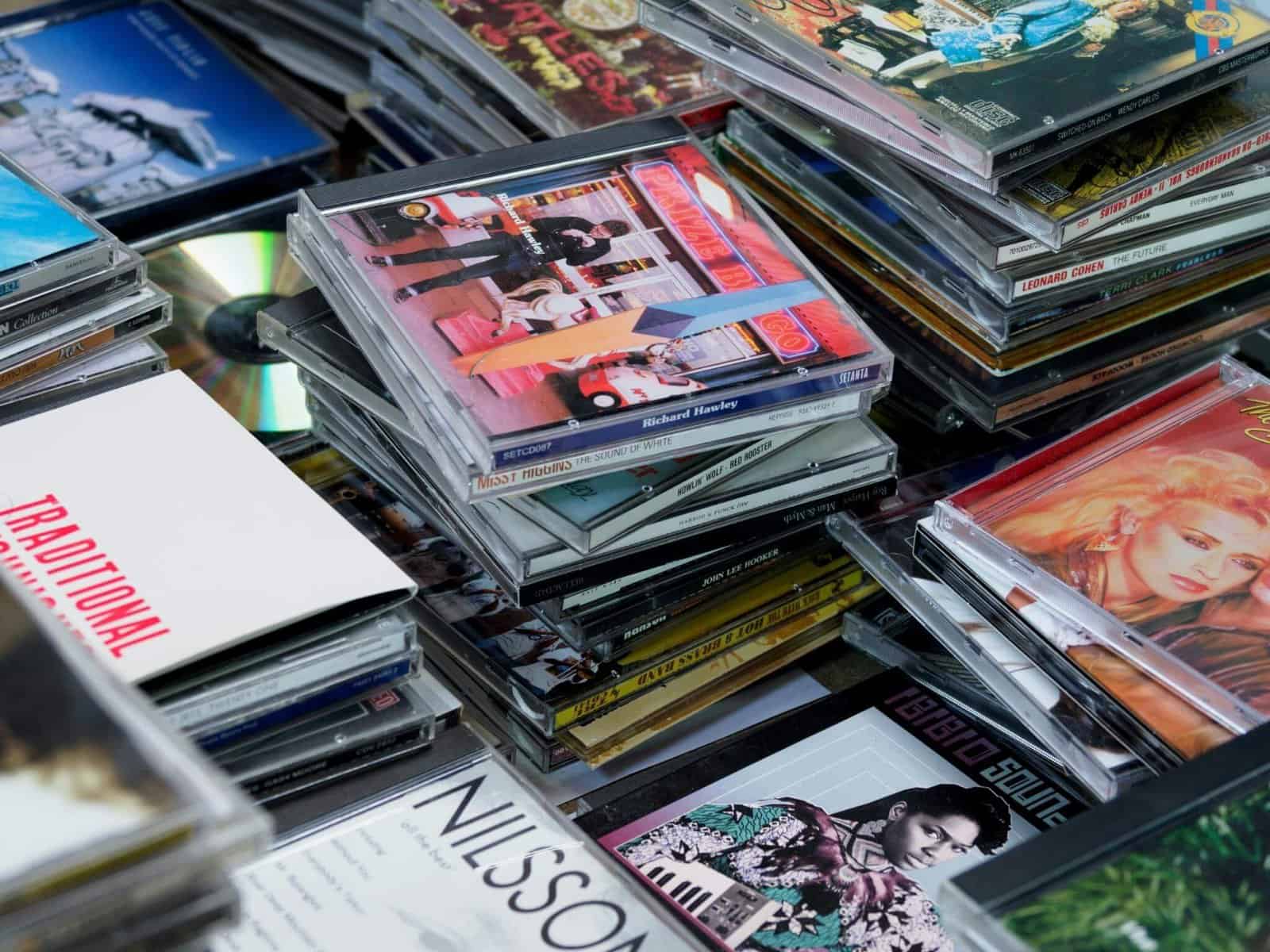 While everyone has an opinion on what makes a great album, it’s another matter when discussing the best-selling albums of all time.

We think you’ll find our results surprising and insightful, so join us as we categorize the greatest artists and bands by album sales.

The 10 Best-Selling Albums Of All Time

To formulate our list, we used the Recording Industry Association of America’s (RIAA) findings that ranked albums based on millions of units sold worldwide.

So, without further ado, here’s our list of the 10 best-selling albums of all time:

One wouldn’t expect Hootie & the Blowfish to have a higher sales ranking than Beyonce, Cold Play, and The Rolling Stones. But when you consider their string of hits, it’s easy to understand how they sold so many albums.

Hootie & the Blowfish formed in the 80s and played folk-rock songs around the University of South Carolina. They were signed to one of the biggest record labels in the world in 1993 and would become Atlantic Records’ top stars.

Cracked Rear View was released in July 1995 and was well-received by critics. Music fans also loved the album and showed their approval by making it the best-selling record that year.

Some of the band’s hits include “My Hand,” “Only Wanna Be with You,” and “Let Her Cry.” The band continues to tour, but frontman Darius Rucker has also found success as a solo country artist.

While this artist may surprise some, we expected as much. Garth Brooks helped country music, one of the most popular music genres, have cross-over and international success.

Double Live was released in 1998 and contained two CDs that captured live performances from his 1996-98 world tour. To date, Double Live is the best-selling live album in US history.

Double Live is a collection of Garth’s hits like “Callin’ Baton Rouge,” “Papa Loved Mama,” and “Rodeo.” But let’s not forget his mega-hits like “Unanswered Prayers,” “The Dance,” and his iconic “Friends In Low Places.”

What we find interesting about The Wall is that it is a rock opera. While this isn’t unique, it is stunning that a concept album by Pink Floyd outsold more conventional artists and bands.

But for Pink Floyd fans, this doesn’t come as a shock. One of the band’s earlier albums, Dark Side of the Moon, was once the best-selling album of all time.

Another interesting fact about The Wall is that it only had two hit singles. “Another Brick in the Wall, Part 2” became an international smash that made album sales soar. “Comfortably Numb,” one of the best songs of all time, has one of rock’s most recognizable guitar solos.

The Wall was released in 1979 and was nominated for several Grammy Awards. These include Best Rock Performance By A Duo Or Group With Vocal and Album of the Year.

Billy Joel is one of pop music’s biggest stars whose career has spanned several decades. So it’s no wonder he has a best-selling album.

According to his official website, his nickname is “The Piano Man,” and he’s written songs about growing up in the Long Island area. Aside from playing piano, he’s an astounding songwriter and has written 33 Top 40 hits.

Greatest Hits Volume I & Volume II is a double album released in 1985 and contains Joel’s hits up to that point in time. The first track, “Piano Man,” came out in 1973 and is how he got his nickname.

Other tracks include “Just The Way You Are,” “Movin’ Out,” and “Pressure.” The double album is a treasure trove of classic smashes which helped sell millions of records. Billy Joel has won five Grammy Awards and continues to perform worldwide.

Aside from being one of the top-selling albums of all time, Led Zeppelin IV is packed with iconic hits, musicianship, and intrigue. The album was released in 1971 and is known by several titles because there wasn’t a title on the cover.

Most music fans call it “IV” since it was Led Zeppelin’s fourth release. Some call it ZoSo because of the four symbols on the cover representing each band member.

Others refer to it as Four Symbols or The Fourth Album. Ironically, their record company thought not having an album title would be disastrous. However, we guess Led Zeppelin had the last laugh!

When you listen to the album, you’ll quickly recognize rock classics like “Rock and Roll” and “When the Levee Breaks.” The fiery licks of “Black Dog” tell you that the musicianship in Led Zeppelin was stellar. But despite their talent, they also created one of the most forbidden riffs banned in guitar stores on their flagship hit, “Stairway to Heaven.”

Songs on the album vary in genre and reflect the band’s musical skills and love of blues and folk music. All of these make Led Zeppelin IV one of the most influential and inspiring albums of all time.

Beatle fans know this album as the White Album due to its plain cover. The two-record set came out in 1968 and was the ninth album by the Beatles.

The Beatles wanted the cover to be in stark contrast to the wildly colorful imagery of Sgt Peppers’ Lonely Hearts Club Band. They wrote the songs at a meditation retreat in India and were limited to an acoustic guitar, forcing them to write differently.

The Fab Four jammed on the songs while recording at Abbey Roads Studio and selected the best tracks. The result was a scaled-down sound that didn’t rely on production and engineering techniques used on previous albums.

Instead of using their tell-tale four-part harmonies, vocals were sung by whoever wrote the song, which further added to the tension in the band.

Each Beatle member asserted their artistic voice, making the White Album the beginning of the end for The Beatles.

Hits from The Beatles include “Hey Jude,” “Ob-La-Di, Ob-La-Da,” and “While My Guitar Gently Weeps.” The latter features one of the best guitarists of all time playing the solo, Eric Clapton.

The band recorded the album in the Bahamas, and it was produced by Robert John “Mutt” Lange.

Lange worked on Highway to Hell, and while being a Grammy Award-winning songwriter, he was notorious for demanding perfection from the band. So while the initial experience was challenging, Lange drew the best from the band.

Back in Black features a black cover in honor of Scott’s passing. However, the label insisted AC/DC highlight their name and the title. The band complied, and both appeared on the cover in white.

AC/DC wanted a bell to chime for the opening track, “Hells Bells,” so one was designed to be forged. When the band learned it would take too long, they tried a local church, but the wind and birds made recording impossible.

The foundry picked up production pace and released the bell perfectly tuned. The opening chimes are now part of rock and roll history.

Other classic rock hits include “You Shook Me All Night Long,” “Back in Black,” and “Shoot to Thrill.” With Lange’s production genius and the songwriting skills of AC/DC, Back in Black set the standard for how high-energy rock albums should sound to have chart success.

Tipping the scales at #3 is the pop-rock supergroup, the Eagles. Hotel California was released in 1976 and introduced the world to new band member Joe Walsh.

According to his official website, the top-rated guitarist, best known for his solo hit “Rocky Mountain Way,” added energy and legendary riffs to the Eagles’ album.

The concept album was the band’s sixth album and features songs about the trappings of fame, loss of innocence, and political corruption. Adding to the album’s mystique is the front and back cover artwork.

On the front is a picture of the Beverly Hills Hotel photographed at sunset. The dim light makes the building look haunting, which worked well with the title track. The back cover was taken inside the lobby and featured the band, friends, and people on the fringe of society.

But what’s on the inside makes it one of the best-selling albums in history. One can hear Walsh’s influence on “Life in the Fast Lane.” According to Joe, the opening riff was a warmup exercise he did before shows. But when Glenn Frey heard the lick, he suggested they use it one day in a song.

Another hit was “New Kid in Town,” which won the 1978 Grammy Award for Best Arrangement for Voices. But nothing tops the title track, “Hotel California.”

The lyrics paint vivid imagery with lines like “Her mind is Tiffany-twisted, she got the Mercedes bends,” while the Latino groove is contagious. The closing guitar arpeggios and solos were Joe Walsh’s contribution, making the song and album one of the best-selling albums of all time.

No one should be surprised that the King of Pop has a best-selling album.

Michael Jackson’s Thriller was his sixth album and would hugely impact pop music, fashion, and music videos. In addition, it would be his first album to hit number one on Billboards Top LP and Tapes chart and became one of the best music videos of all time after its release in 1983.

Thriller was released in 1982 and was produced by Quincy Jones, who worked with Michael Jackson on his Off The Wall record. Together, they created massive hits on an album that sounded sonically stunning.

The album is packed to the brim with hits like “Billie Jean,” “Wanna Be Startin’ Somethin’,” and “Beat It.” One of rock’s best guitarists, Eddie Van Halen, played the solo on the hit. But the hit that revolutionized the music, video, and fashion industry was “Thriller.”

Thriller has a hypnotizing groove with horror movie sound effects that mesh with the haunting lyrics. For most Michael Jackson fans, it was the music video they associated with the song.

The “Zombie dance” has been performed worldwide by adoring fans, and Jackson’s red leather jacket impacted the fashion market.

Sitting at the top of the heap are the Eagles with Their Greatest Hits (1971-1975.) But if the band had it their way, the album wouldn’t exist.

The Eagles’ record company and the manager decided to release the greatest hits album in 1976 without consulting with band members.

Don Henley and others didn’t like that songs like “Tequila Sunrise” wouldn’t be heard in the album’s context. They added that the label was merely interested in their bottom line.

One bright side to releasing Their Greatest Hits was that it allowed the Eagles to focus on another project: Hotel California. So, in the end, you could say everyone won.

The album has ten chart-topping songs like “Take it Easy,” “Desperado,” “Take it to the Limit,” and “One of These Nights.”

With classic rock hits like these, we believe Their Greatest Hits (1971-1975) will remain number one for a long time.

That concludes our look at the 10 best-selling albums of all time. We hope you learned a new fact about these albums or were even surprised by who made the list.

While marketing and touring helped album sales, becoming the best-selling album of all time requires great songs, musicians, and producers.

Which one of the best-selling albums of all time is your favorite? Leave a comment below.

The 10 Best Music Videos of All Time