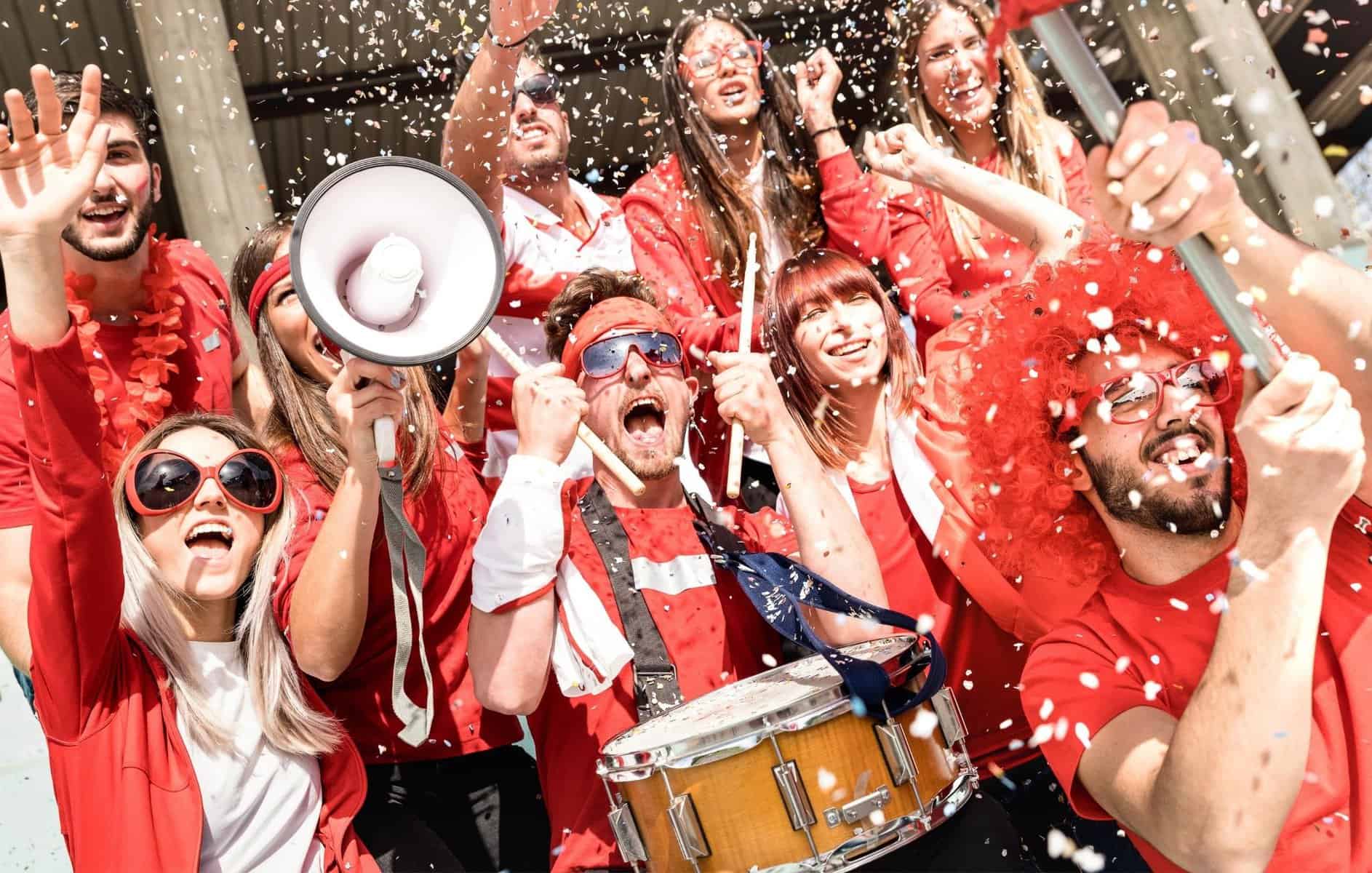 Having the best pump up songs for sports is important when you’re mentally and physically preparing for a big game, a workout, or a jam session.

Nothing gets your adrenaline pumping more than listening to an intense tune with a catchy beat!

Whenever you need hyping up, you can rest assured that music will always set the mood.

We’ve listened to countless tunes, and we’ve picked the greatest motivational anthems of all time.

Here’s our playlist of the 23 best pump up songs for sports:

Christian metal band, P.O.D. released “Boom” as the third single from their second album, Satellite, which then became one of the most common hype songs of the early 2000s.

“Boom” is a song that shares the band’s feelings about traveling and performing. Although they came from humble beginnings, now they’re representing their hometowns around the world.

“The Pretender” was the first single from the Foo Fighters’ 2007 album, Echoes, Silence, Patience & Grace.

The lyrics describe how authority figures in society lie to manipulate the emotions and beliefs of everyday citizens in an effort to remain in positions of power.

If you’re a Foo Fighters fan, you’ll enjoy their song, “Learn To Fly,” which is featured on our best 90s songs playlist.

This alternative rock song topped the Canadian Rock, U.S. Billboard Mainstream Rock, and Alternative Airplay charts, while also securing the #37 spot on the Billboard Hot 100 in 2007.

This EDM instrumental is among the most commonly used pump up songs in a variety of sporting events. It was released as the lead single from Darude’s debut studio album, Before the Storm.

“Sandstorm” has no lyrics, but it makes up for it in intensity, which makes it the perfect soundtrack for any time you need a boost.

In 1999, the song soared to#1 in multiple countries, including Ireland, Norway, and the UK. In 2020, it was certified Platinum, having sold over one million units.

Another must-have pump up song for your playlist is “Remember The Name” by rapper, Fort Minor, which included Mike Shinoda, the co-lead vocalist in the band, Linkin Park.

The main focus of this song is what musical artists have to go through to make it in the music industry.

19. Crawling In The Dark – Hoobastank

“Crawling In The Dark” was Hoobastank’s debut single, released in 2001, that became their breakthrough hit.

The lyrics focus on the fact that most of us feel like we’re “crawling in the dark” through life, not knowing what each day holds and not really knowing if we’re making the right decisions or not.

All-star rappers Drake, Kanye West, Lil Wayne, & Eminem teamed up on this hit single, which was written for the soundtrack of the 2008 LeBron James documentary, More Than a Game.

This hype song centers around James’s rise to basketball stardom and how he became so successful.

“The Middle” was the breakout hit for the beloved band, Jimmy Eat World, in 2001, and was released as the second single from their fourth album, Bleed American.

This great pump up song is about fitting in and lets listeners know that it’s okay to not be popular. The best thing you can do is just be yourself.

The band’s signature song took the #1 spot on the Billboard Alternative Airplay chart and #2 on both the Adult Top 40 and UK Rock & Metal charts between 2001 and 2003.

If you need to get angry fast, this one’s for you. Rap metal band, Limp Bizkit, released this jam on their second studio album, Significant Other, in 1999.

“Break Stuff” offers the perfect mix of rap and metal and talks about literally going off in a rage and coping by destroying things.

American rapper, Kanye West’s hit, “Stronger,” was released as the second single from his 2007 album, Graduation.

The lyrics are based on Daft Punk song, “Harder, Better, Faster, Stronger” and the quote from philosopher, Friedrich Nietzche: “What does not kill me makes me stronger.”

“Stronger” also appears on our best songs to wake up to playlist, which is another great place to find confidence-boosting tunes!

The song topped the Billboard Hot 100 in 2007 and won a Grammy Award for Best Rap Solo Performance in 2008.

“Hate To Say I Told You So” is the first single from the Swedish band, The Hives, and was released on their second album, Veni Vidi Vicious, in 2000.

This tune plays on the popular Latin phrase, “Veni Vidi Vici,” which means, “I came, I saw, I conquered. It talks about taking charge of one’s own life and calling the shots.

13. Before I Forget – Slipknot

If you enjoy heavy metal, then this will most likely become your workout theme song.

“Before I Forget” was the third single from Slipknot’s third album, Vol. 3: (The Subliminal Verses). The lyrics focus on standing your ground and choosing to be a good person, no matter what people think.

In 2006, the song won a Grammy Award for Best Metal Performance, and in 2005, it peaked at #11 on the Billboard Mainstream Rock chart.

“Crazy Train” was the debut solo single from the heavy metal artist, Ozzy Osbourne, which was released in 1980 from his first album, Blizzard of Ozz.

Although many believe it’s about insanity, this great song is actually referring to the Cold War and how it’s comparable to the state of society today.

AC/DC released this tune as the lead single from their 1990 album, The Razors Edge.

“Thunderstruck” has remained a staple song for sporting events. It talks about power and is based on the real-life experience of guitarists, Angus and Malcolm, who were flying in a plane when it was struck by lightning.

If you’re into AC/DC, then check out our best 80s songs playlist, which features another one of their hits, “Back In Black.”

The song reached #1 in Finland, #4 in Australia and Belgium, and #3 in Spain, the Netherlands, Sweden, and New Zealand. It also charted #5 on the Billboard Hot Mainstream Rock Tracks chart between 1990 and 2022.

Rapper, DMX, released “Party Up (Up In Here)” as the second single from his third album, …And Then There Was X, in 1999.

This popular party jam is a negative commentary against other rappers who were in competition with DMX.

In 1977, Queen released this hit from their album, News of the World. It’s one of the only songs to feature a significant a cappella stomping and clapping section.

“We Will Rock You” shares the story of a boy’s life as he grows up, highlighting his confidence and ambition.

This hardcore song comes from Stone Sour’s second album, Come What(ever) May, which was released in 2007.

“Made Of Scars” tells of the male narrator’s emotional wounds from never knowing his father growing up and how they continue to haunt him.

This alternative metal jam made it to #12 on the Billboard Hot Mainstream Rock Tracks in 2007 and the band itself boasts almost 3.5 million Spotify listeners.

This jam will surely pump you up for whatever you’re about to do! The song features the simple message of turning up the music, dancing, and being free.

The Black Eyed Peas have tons of other great hits, including, “Where Is The Love,” which you can find on our best songs about helping others playlist.

Here’s another great workout song to listen to when you need some motivation. “Bodies” by Drowning Pool was released in 2001 off of the band’s debut album, Sinner.

Although many have misinterpreted the song to be violent, this nu metal hit is widely considered a mosh pit anthem and was actually written about the brotherhood of the mosh pit.

5. Killing In The Name – Rage Against The Machine

Rage Against The Machine released this anthem after the riots that wreaked havoc on L.A. in 1992 after a group of white police officers beat an unarmed African-American man.

“Killing In The Name” is a protest song, which focuses on systemic racism, police brutality, and the harm they cause in society. You’ll also find it on our best songs of all time playlist, as it’s a true classic.

4. Eye Of The Tiger – Survivor

“Eye Of The Tiger” by Survivor is one of the greatest songs for sports, due to its motivational beat and inspiring lyrics.

It’s featured on the Rocky III soundtrack and talks about the hard work, dedication, and mental/physical training required to achieve success.

As one of the best hype songs ever written, “Eye Of The Tiger” quickly took the top spot on the Billboard Hot 100 and the UK Singles Chart in 1982.

This song’s instrumental version alone will pump you up! Europe’s glam metal jam, “The Final Countdown,” was released in 1986 and took the world by storm.

The lyrics feature apocalyptic and optimistic themes, telling the story of how life as we know it ended and humans left Earth.

The song was a global #1 hit, taking the top spot on charts everywhere from the UK and South Africa to Sweden and Italy between 1986 and 1987. It also peaked at #8 on the Billboard Hot 100 in the U.S. during the same time frame.

If you’re searching for a killer beat and inspiring lyrics, listen to “‘Till I Collapse” by Eminem, one of the best rappers of all time. It’s all about pushing through pain and hardship in order to achieve greatness.

If you’re into Eminem, then we encourage you to check out our best songs about family playlist, which features his song, “Mockingbird.”

Many people have hyped themselves up by listening to “Seven Nation Army” by The White Stripes. It serves as the opening track on the band’s fourth studio album, Elephant, which was released in 2003.

“Seven Nation Army” is about the band’s struggles of fame and fortune and how people were always gossiping about them.

The tune has been used as a theme song for a variety of sports teams and events, including the 2018 FIFA World Cup. In 2004, the song won a Grammy Award for Best Rock Song, while the music video earned an MTV Video Music Award for Best Editing in a Video in 2003.

We hope these songs help you get pumped up, no matter if you’re an athlete prepping to take on your next competitor or you’re training for an intense weight lifting session.

Get your game face on and go get ’em!

What’s the best pump up song for sports, in your opinion? Leave a comment below.