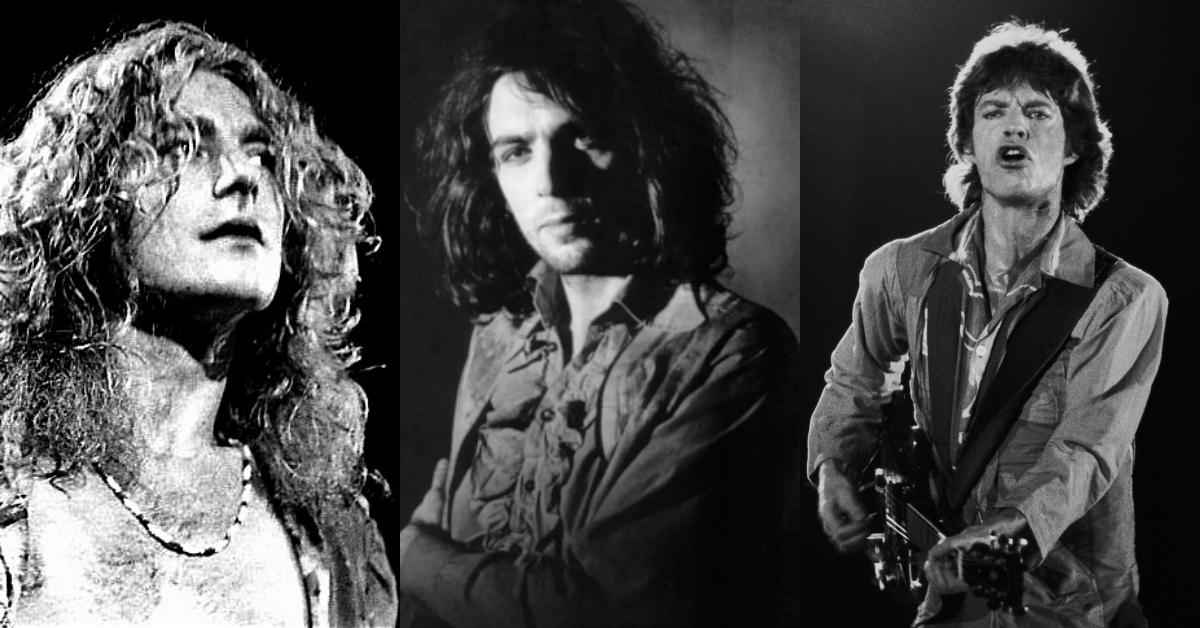 The best rock bands of the 70s created classic albums as varied as the era’s colorful bell bottoms and outlandish hairdos.

Several of these groups explored new ways to express music and wrote rock operas, while others pioneered genres like country rock and progressive rock.

Some bands on our list started in the 60s and rode the wave of success into the 70s to become rock legends. But, no matter how they began, these bands have one thing in common: they are some of the greatest rock bands of the 70s!

We focused on rock bands and not disco acts despite them flourishing in the 70s and generating many top-selling hits.

Next, we based our ranking on US album sales during the 70s, even though bands like Fleetwood Mac sold albums in later decades.

So cue the drumroll because here’s our list of the 10 best rock bands of the 70s:

The Allman Brothers Band formed in Jacksonville, Florida, in 1969 and wrote blues rock songs that featured long jams and guitar improvisations. They would influence most of the southern rock bands that emerged later and even shaped the career of guitar legend Eric Clapton.

The band leaders were brothers Gregg and Duane Allman, who grew up in Daytona, Florida, and played keyboards and guitar. Known as a hard-touring ensemble, The Allman Brothers Band hit the road, playing about 300 shows a year, slowly building a fan following.

Their efforts paid off, and they’d have hits songs with “Melissa,” “Midnight Rider,” and “Ramblin’ Man.” Although Duane tragically died in a motorcycle crash in 1971 and Gregg from cancer in 2017, their contribution to music history as The Allman Brothers Band is strong to this day.

The band began in Topeka, Kansas, where they developed their sound and songwriting skills and developed a following. Their hard work eventually made them one of America’s most famous progressive rock bands.

With the guitar work and songwriting skills of Kerry Livgren, along with lead singer and keyboardist Steve Walsh, this six-piece band had a distinct sound. Violinist Robby Steinhardt created melodic lines that harmonized with Livgren’s guitar melodies.

Success would come with their fourth album in 1976 entitled Leftoverture. The album contained the band’s first hit song, “Carry On Wayward Son,” which is still heard on classic rock radio stations.

Their fifth album, Point of No Return, garnered hits with the title track and the pop-rock ballad “Dust in the Wind.” Kansas has been nominated for a Grammy Award, and the remaining band members are still active musically, which makes this American rock band one of the best from the 70s.

This American rock band was formed in Jacksonville, Florida, in the mid-sixties and didn’t take the name Lynyrd Skynyrd until 1969. The decision would not only earn them many top hits but would make them one of the premiere southern rock bands to hit the music scene.

Lynyrd Skynyrd crafted their sound by rehearsing long days near the swamps of Florida. During these challenging times, they wrote the bulk of the material for their first album, many of which would become rock classics.

Lynyrd Skynyrd toured to support the album opening for The Who, and when RIAA awarded their album a gold disc in 1974, they knew they were on their way to being rock stars.

Considering their musical contribution and induction into the Rock & Roll Hall of Fame in 2005, it’s easy to see why Lynyrd Skynyrd is one of the best bands in rock music.

The Who is a British rock band that formed in the mid-60s and had chart success with songs like “Magic Bus,” “My Generation,” and “Pinball Wizard” off their rock opera, Tommy.

The four-piece band was known for energetic, loud concerts and for being great musicians. Keith Moon, regarded as one of the best drummers of all time, had a unique style of playing that was recognizable at concerts and on their albums.

With the spillover success of Tommy from 1969, The Who capitalized on this in the 70s and released rock music classics.

Additional hit songs include “Behind Blue Eyes,” “Baba O’Riley,” and “The Real Me” from their second rock opera, Quadrophenia. They would have more hits in the 80s until the band called it quits in 1983.

The Who were inducted into the Rock & Roll Hall of Fame in 1990, and although Keith Moon and John Entwistle have passed, Daltrey and Townsend continue to perform, proving that The Who is still a great rock band.

Deep Purple is another band formed in the 60s but never really had success in the United States. That all changed in 1972 when their single, “Smoke On the Water,” became one of the forbidden riffs banned in guitar stores and made Deep Purple international superstars.

Even though Deep Purple was a hard rock band, many of today’s heavy metal bands point to them as instrumental in their musical growth. Lead singer Ian Gillan also sang on the Jesus Christ Superstar album and with Black Sabbath after Deep Purple broke up.

The band released a string of singles over the years, but none had the success that “Smoke On the Water” had. Deep Purple broke up in 1976 but reformed in the mid-80s and continued to tour with some original members.

In 2016, Deep Purple was inducted into the Rock & Roll Hall of Fame, proving that they were one of the best rock bands of the 70s.

Heralded as the greatest rock ‘n roll band in the world, the Rolling Stones are easily one of the best bands of all time who continue to tour.

The band formed in the early 60s and is credited with being part of the British Invasion that took America by storm. The original lineup consisted of Charlie Watts, Bill Wyman, Keith Richards, and Ronnie Woods, with Mick Jagger.

Some of the bands’ classic rock songs from the 70s include “Doo Doo Doo Doo Doo (Heartbreaker),” “It’s Only Rock ‘n Roll (But I Like It),” and the ballad “Angie.”

While some rock bands faded, The Rolling Stones endured because they shifted with the changing musical scene of the 70s. When disco became popular, the band released “Miss You” to ride the wave of the dance scene.

Although Bill Wyman is no longer in the band and Charlie Watts recently passed away, The Rolling Stones continue to tour, playing their timeless hits and setting the bar high for future bands.

Fleetwood Mac is a British-American rock band that began in the late 60s whose early sound was blues rock influenced. This era earned Fleetwood Mac some minor hits like “Black Magic Woman,” which Santana would make famous and more popular years later.

As the band crossed into the 70s, they underwent various personnel changes, lawsuits, and other calamities until 1975, when the lasting ensemble came together. This lineup, which included Stevie Nicks, recorded the band’s tenth record, and it would go on to be their breakthrough release.

Fleetwood Mac had a slew of hits off their self-titled debut album, like “Over My Head,” “Say You Love Me,” and “Landslide.” The band’s next album, Rumours, had smash songs like “Go Your Own Way,” “Don’t Stop,” and “You Make Loving Fun.”

Fleetwood Mac broke up in 1995 but has done several reunion tours, while Stevie Nicks became one of the best female singers of all time and had a successful solo career.

As a whole, Fleetwood Mac became one of the more successful soft rock bands of the era, which is why they earned their place on our list.

Like many of our top rock bands, Led Zeppelin began in the late 60s but had mercurial success in the 70s with an album that continues to sell today.

Band members John Bonham, Robert Plant, John Paul Jones, and Jimmy Page formed the English rock band in 1968 and are considered the best on their respective instruments. Jimmy Page, arguably one of the best guitarists of all time, was an exceptional composer, while bassist John Paul Jones was a gifted keyboardist.

Their fourth album, Led Zeppelin IV, came out in 1971 and is full of classic rock hits that have made them one of the best rock bands of the 70s.

One gem is “Rock and Roll,” which showcases Bonham’s fantastic drumming skills and Plant’s high-pitched vocals. “Black Dog” is packed with superb guitar riffs and includes an odd-metered measure that makes this song challenging to perform.

But the band’s crown jewel was “Stairway to Heaven,” which many claim is one of the best songs of all time and features a variety of musical nuances. Today, this song and many others attract new fans and budding musicians, which is why Led Zeppelin is one of the greatest bands of all time.

The Eagles are an American band that popularized country rock and wrote pop hits showcasing their incredible vocal harmonies. They formed in Southern California in 1971 and got their break as Linda Ronstadt’s band, where they toured and recorded on her records.

When The Eagles signed with Asylum Records, one of the biggest record labels in the world, they released their first album, which had two hits. The first was “Take it Easy,” followed by the dark lyrics of “Witchy Woman,” and both reached Billboards Top 20.

In 1976, Their Greatest Hits (1971-1975) would become their best-selling record of all time but also set up the release of their most classic album, Hotel California.

Record critics and fans praise Hotel California as one of the best-selling albums of all time for its intricate vocals, jam-packed hit songs, and the guitar-laden riffs on the title track.

The Eagles have undergone some personnel changes over the years but continue to tour and added country-crooner Vince Gill to replace Glenn Frey, who passed in 2016.

With countless hits to their credit and six Grammy Awards, The Eagles are one of the most successful bands of the 70s.

Although Pink Floyd started in the 60s, this British progressive rock band didn’t find commercial success until the 1970s. While the band accrued a cult following early on, their 1973 album Dark Side of the Moon made them international stars.

“Money” was a hit from the album and is one of the best bass songs of all time, using a 7/4 odd meter that capitalizes on the recognizable bass riff played by Roger Waters.

Pink Floyd released two more albums that had mediocre success until 1979 when The Wall, a record fans and critics site as their masterpiece, set new sales records.

Their most successful single from the album was “Another Brick in the Wall, Pt. 2, ” and a fan-favorite, “Comfortably Numb.” The band’s last tour was in 1994, but Roger Waters and Dave Gilmour continue to perform as solo artists.

Pink Floyd pioneered progressive rock and made it commercially successful, earning the band a Grammy Award, a spot in the Rock & Roll Hall of Fame, and claiming the top spot as the best 70s rock band.

While some bands from the 70s had short-lived careers, others enjoyed long tenures and still tour and record music today.

Each band will continue to be the best 70s rock band in the world, shaping the future of music and tomorrow’s great bands.

Who’s the best 70s rock band, in your opinion? Leave a comment below.